We left on a Friday afternoon with Andy, Anil and me riding down. We rode through Uvas Reservoir and Hwy 25 over to Hwy 198 and then on to Parkfield Grade. It was an easy ride, although it was getting a bit hot. Ayon, Mahesh and Gokul got their bikes down in their trucks.

We gassed up in Tres Pinos. Gas prices were high, but nowhere near the highs they became a few months later, after the Russia Ukraine war. 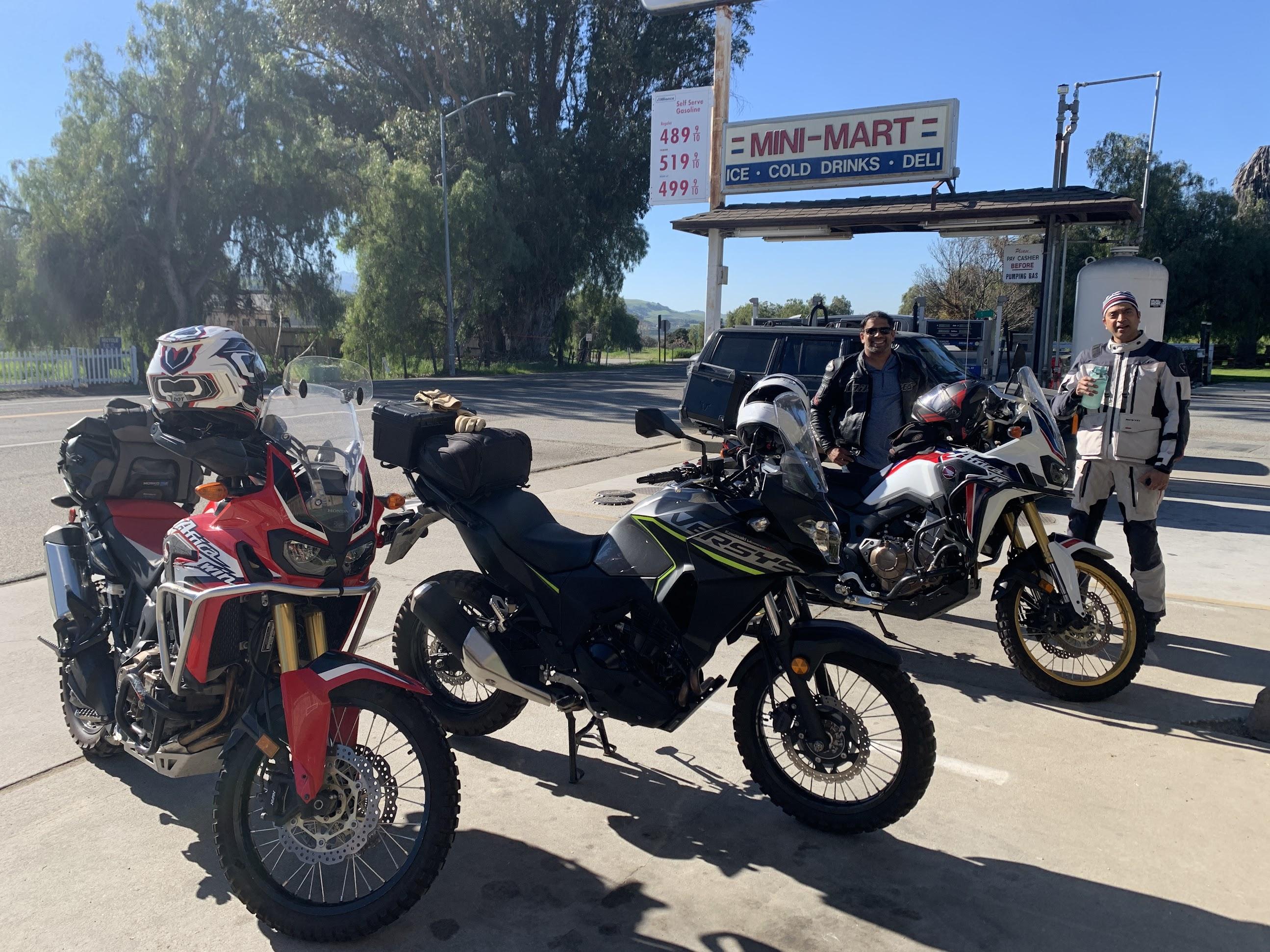 At the end of Hwy 25, Andy briefly lost his balance and dropped his Africa Twin. 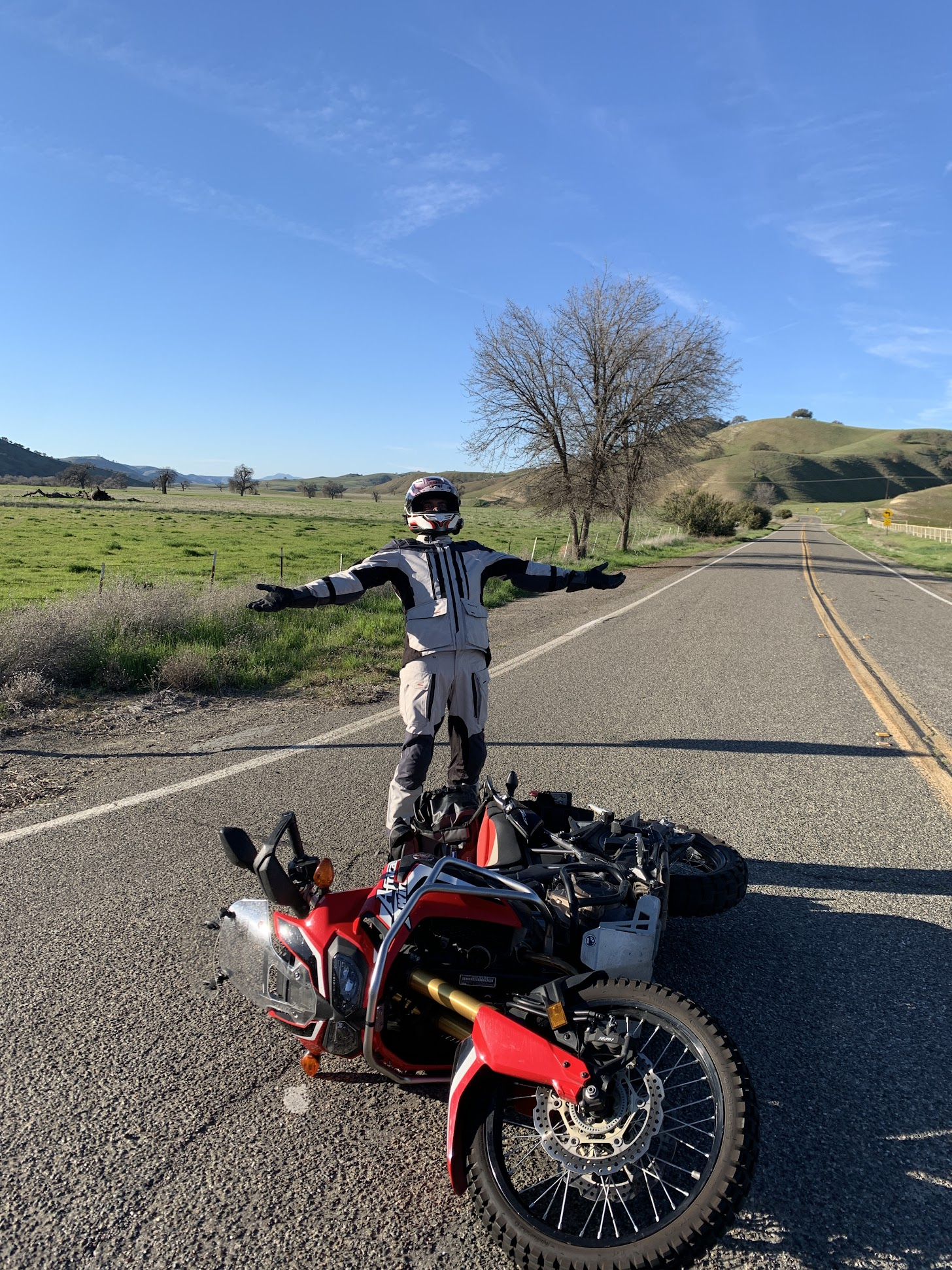 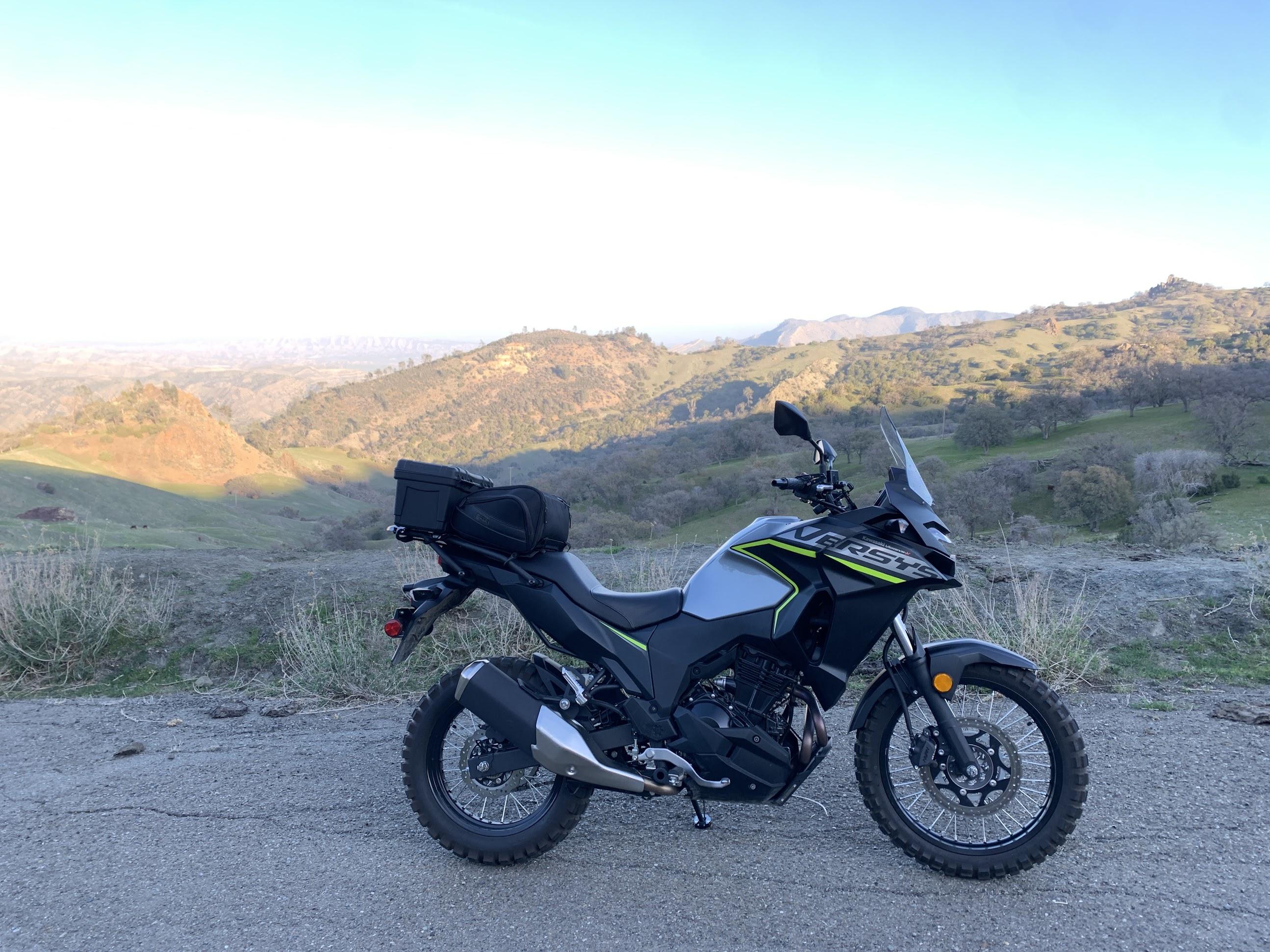 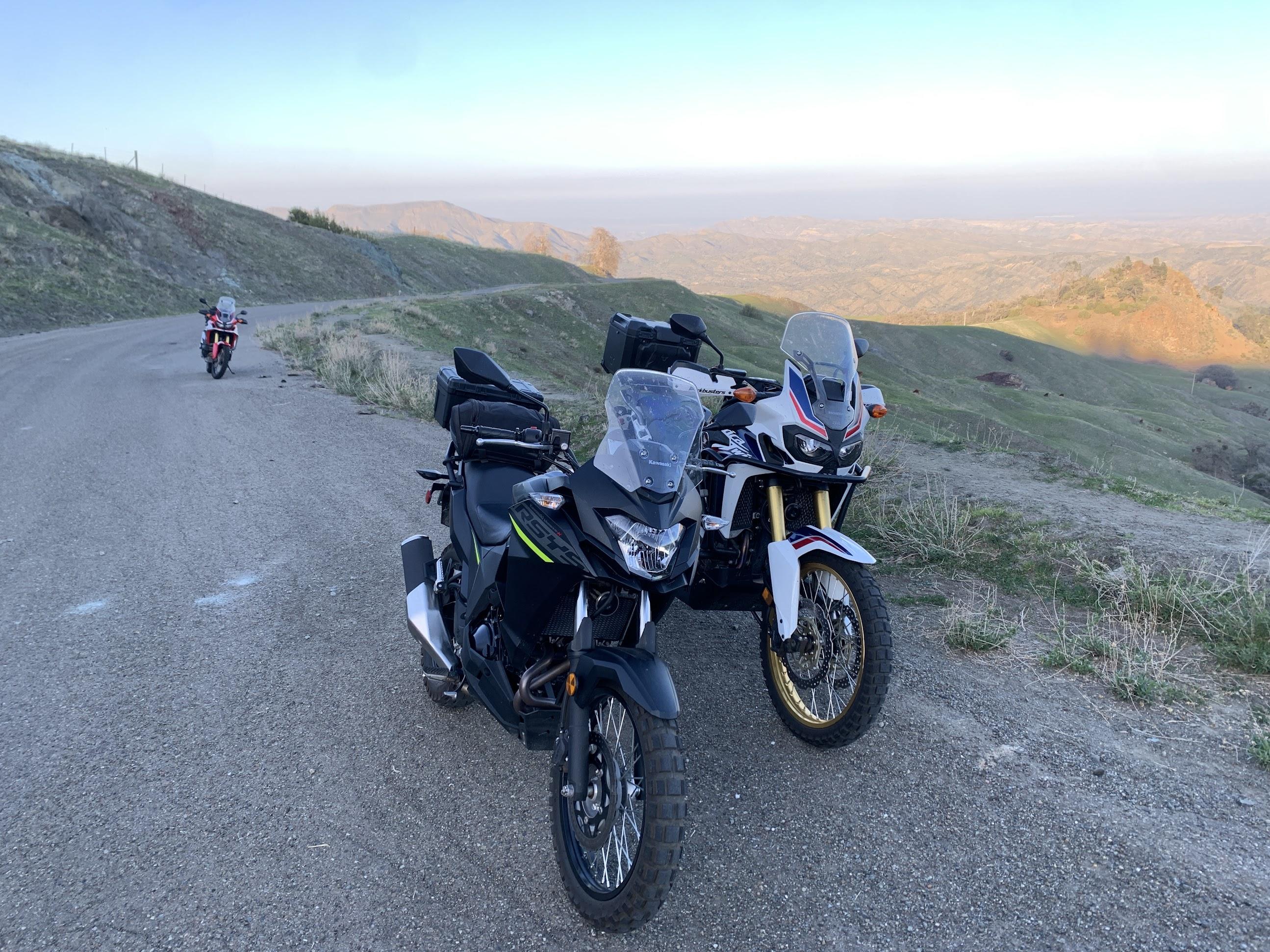 Easy off road down the grade to the cafe. 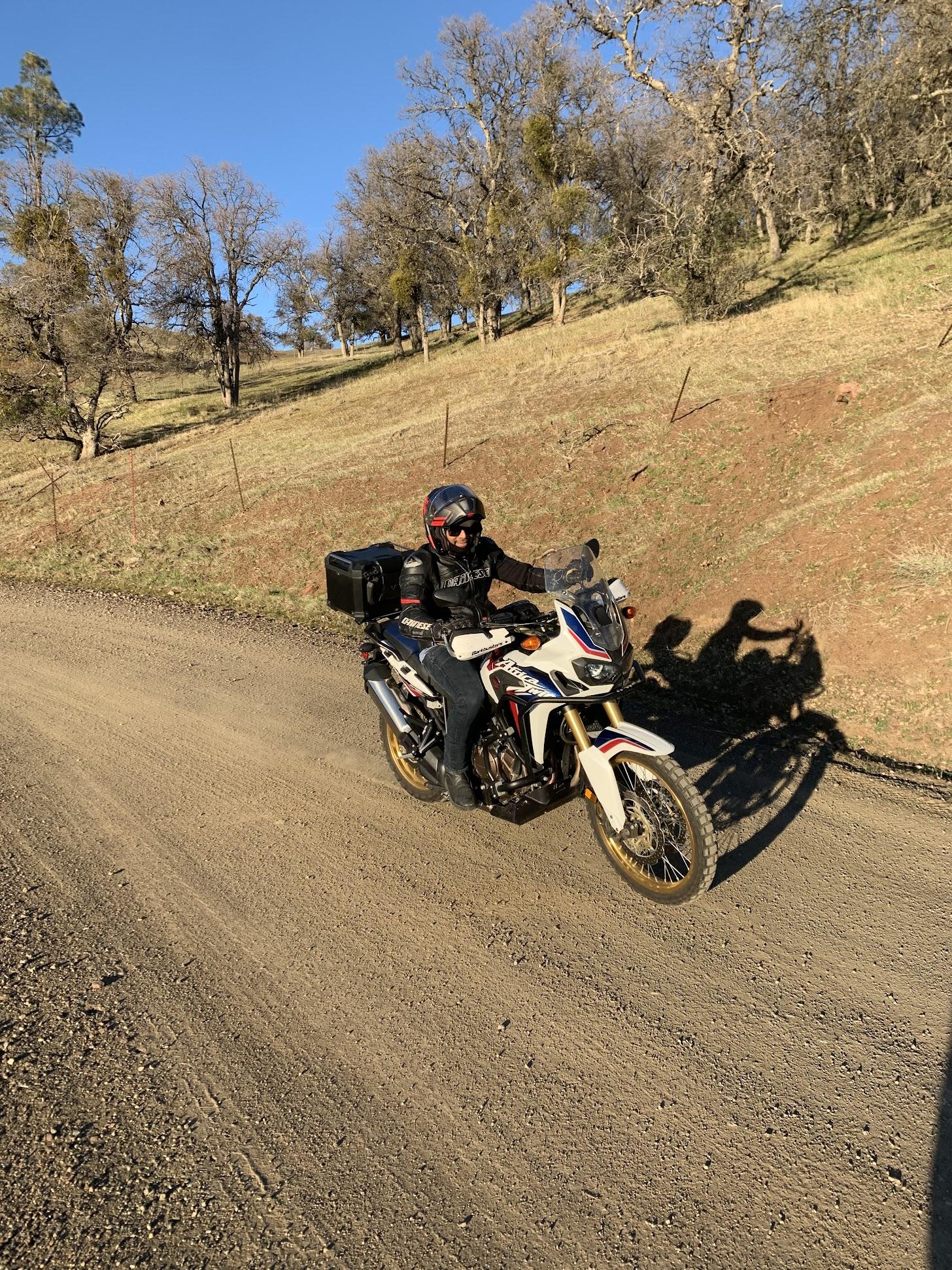 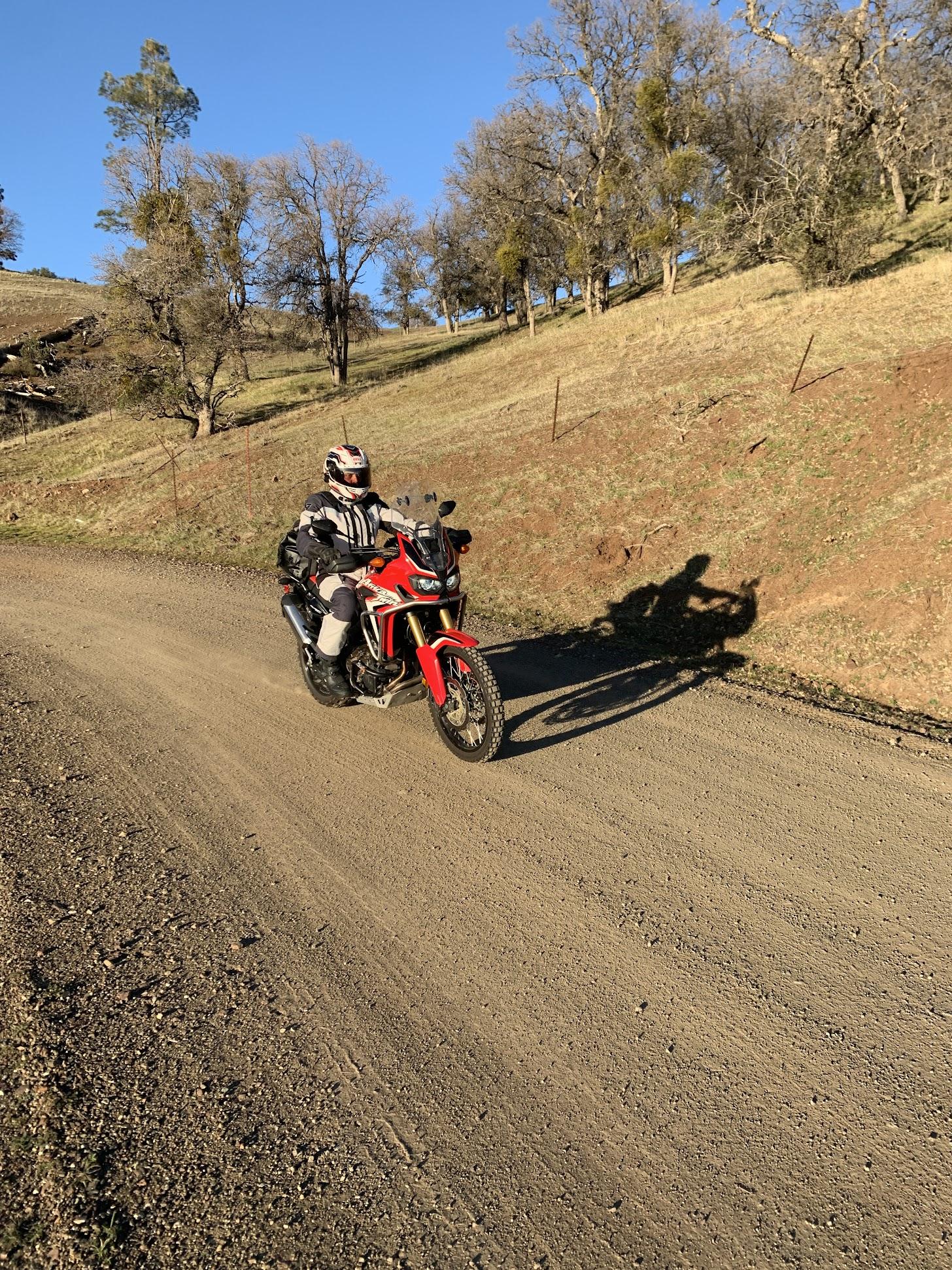 We had a beer each at the cafe, some light food and were on our way to the hotel in Taft, CA. 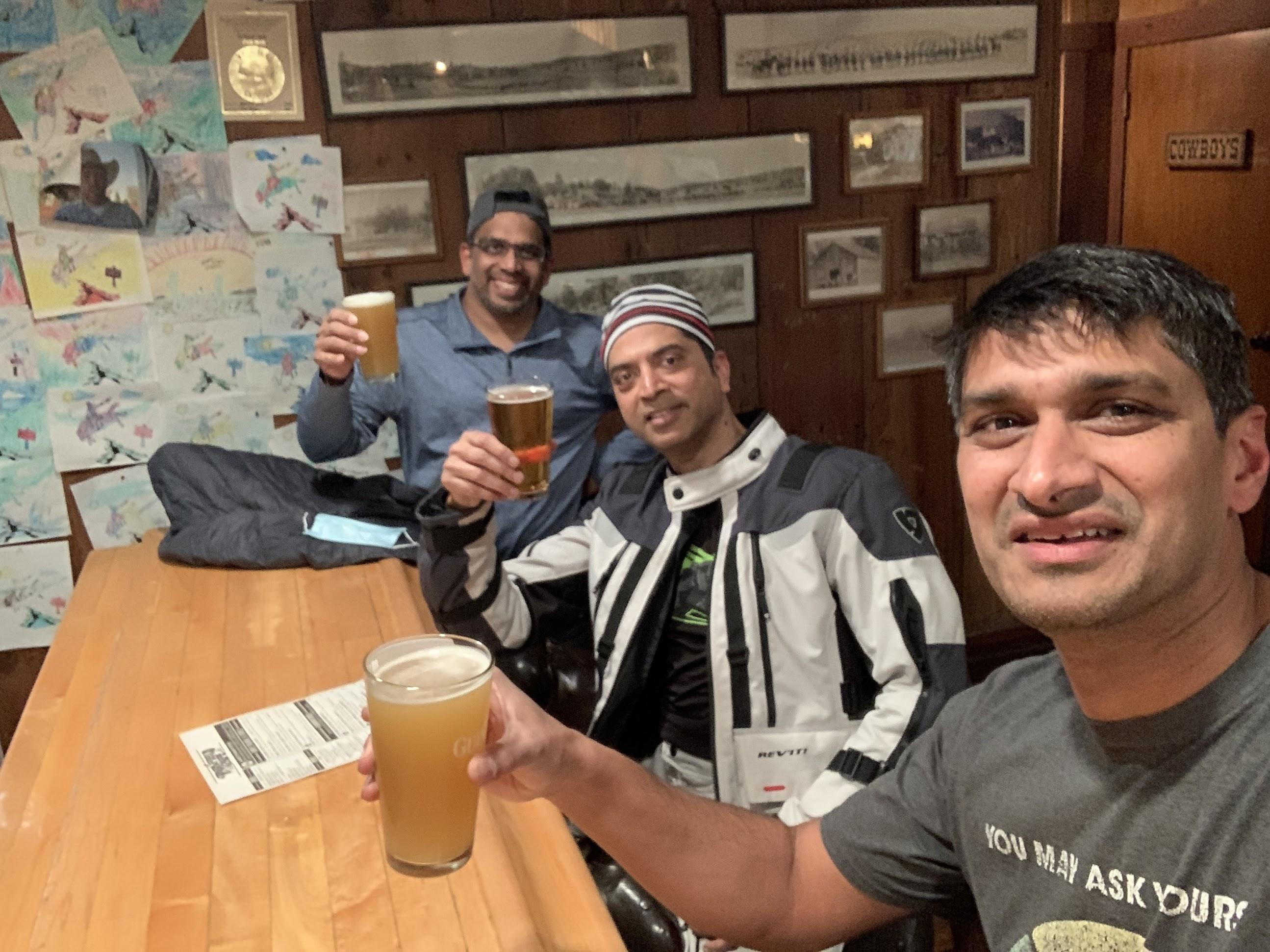 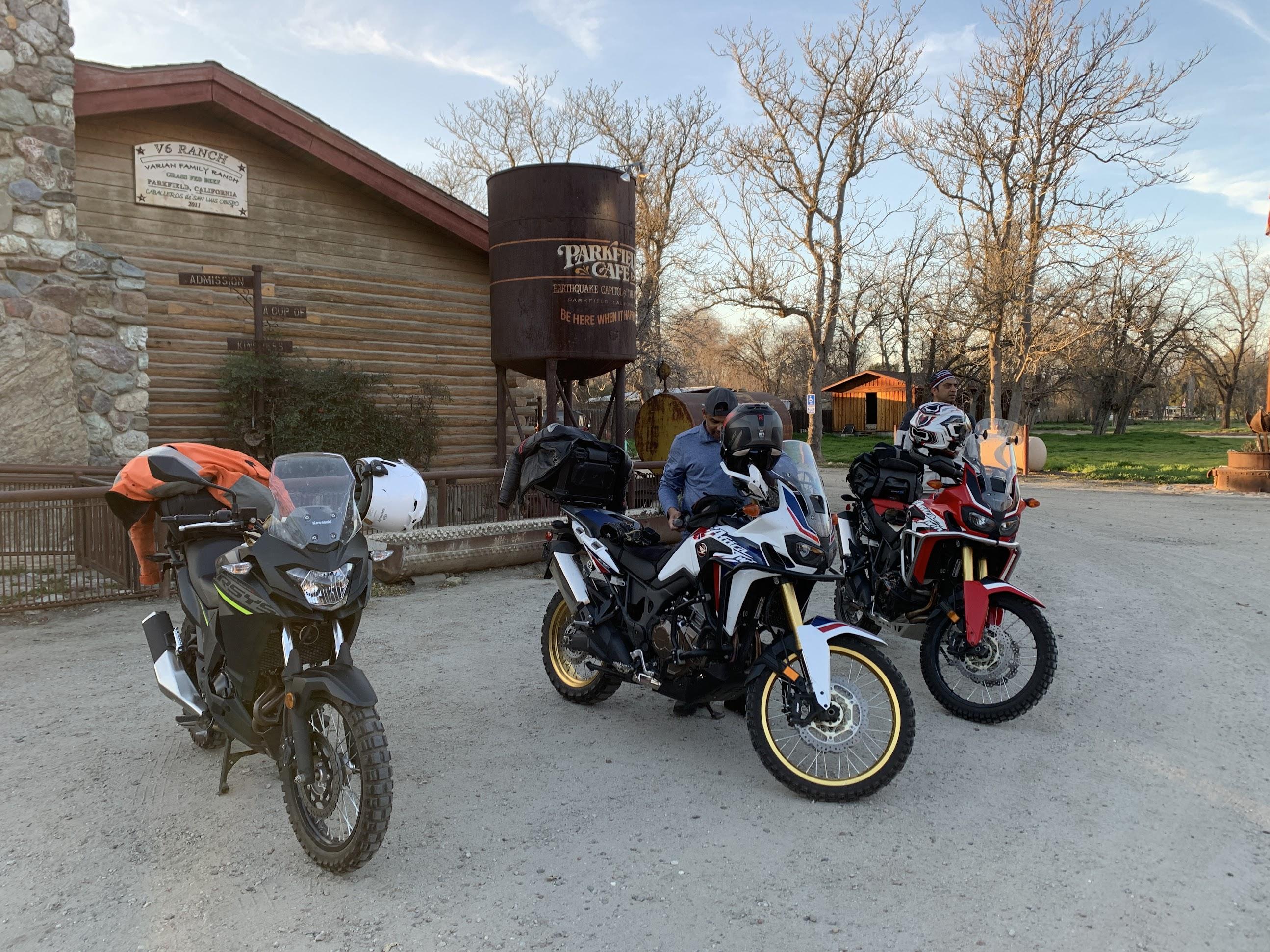 This was in the month of February and it got dark pretty soon as we left the cafe. We gassed up at the James Dean themed gas station “Blackwells Corner” at the intersection of Hwy 33 and Hwy 46. 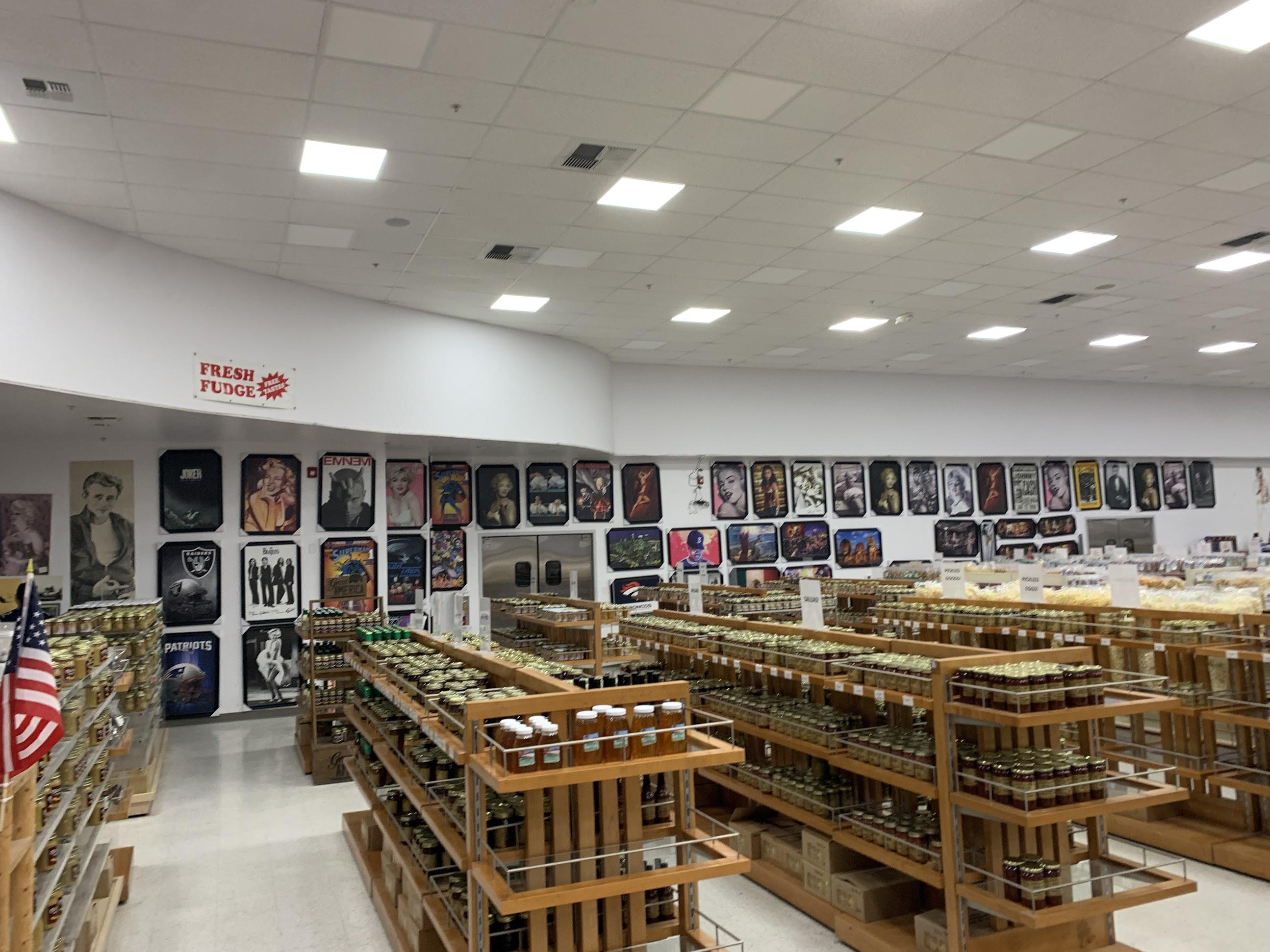 From there it was a straight shot to our hotel in Taft. We reached around 7PM, which gave us ample time to shower and get dinner at the Mexican restaurant, Mi Casita, right next to the hotel. 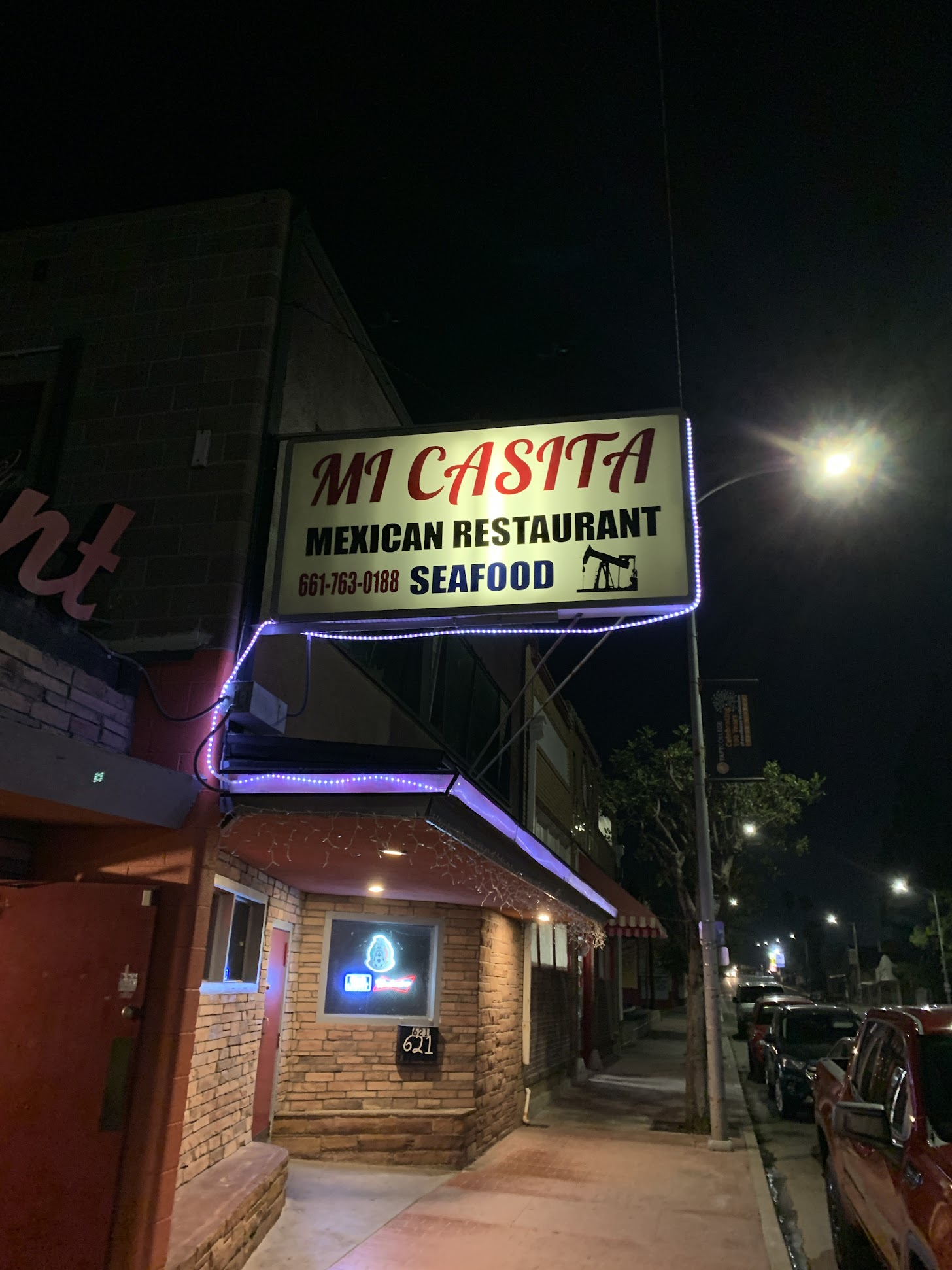 The ride to Carrizo Plain began the next day, Saturday Feb 12th. We unloaded bikes from Gokuls and Ayons trucks, gassed up and were on our way at about 9AM. The highlight for Gokul was his new Rivian R1T truck that hauled Mahesh’s and his bikes down. 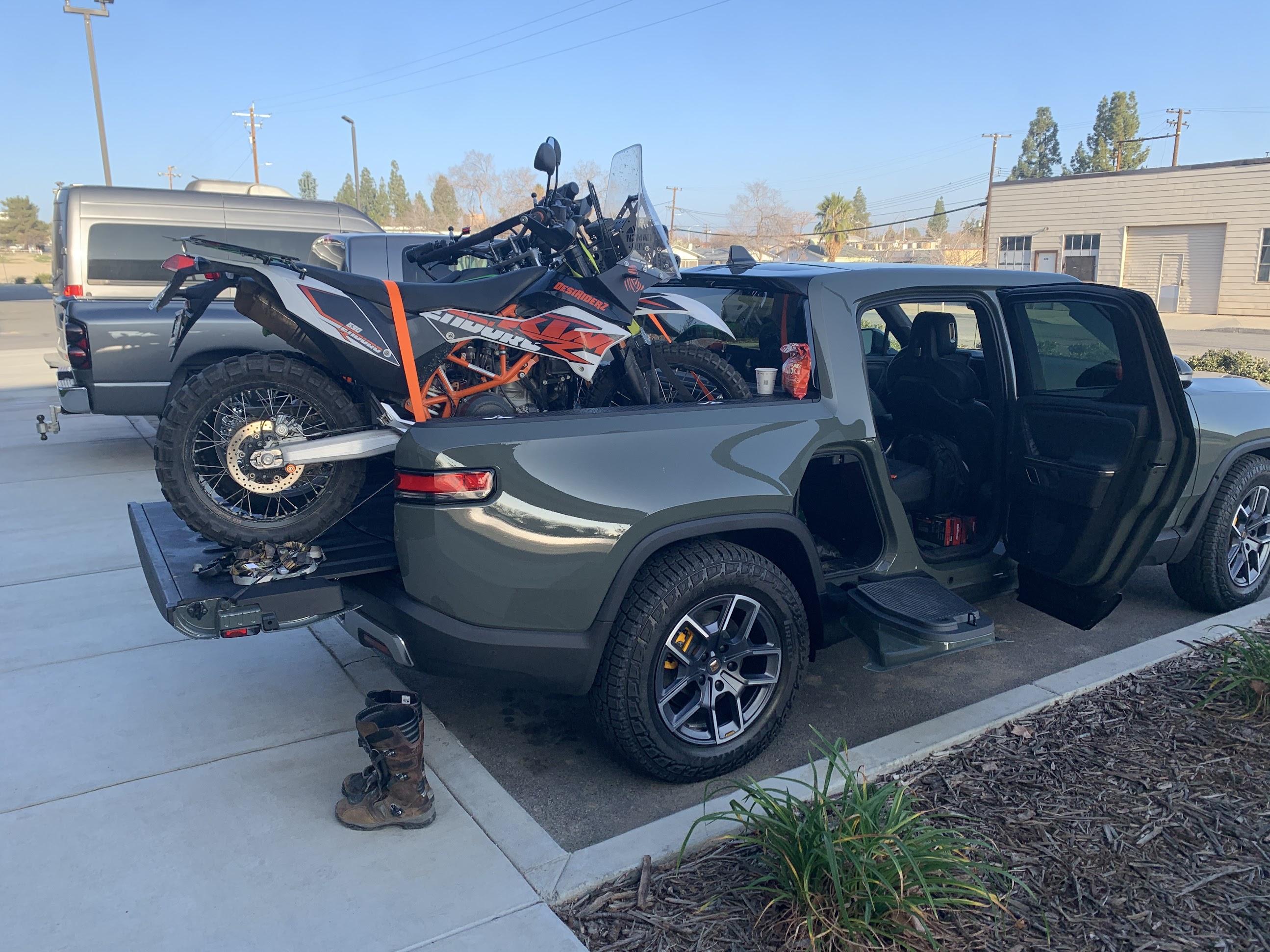 We entered Carrizo through Crocker Springs Road and Hurricane Road. The dirt was hard packed, the temperatures were mild and the ride was perfect. 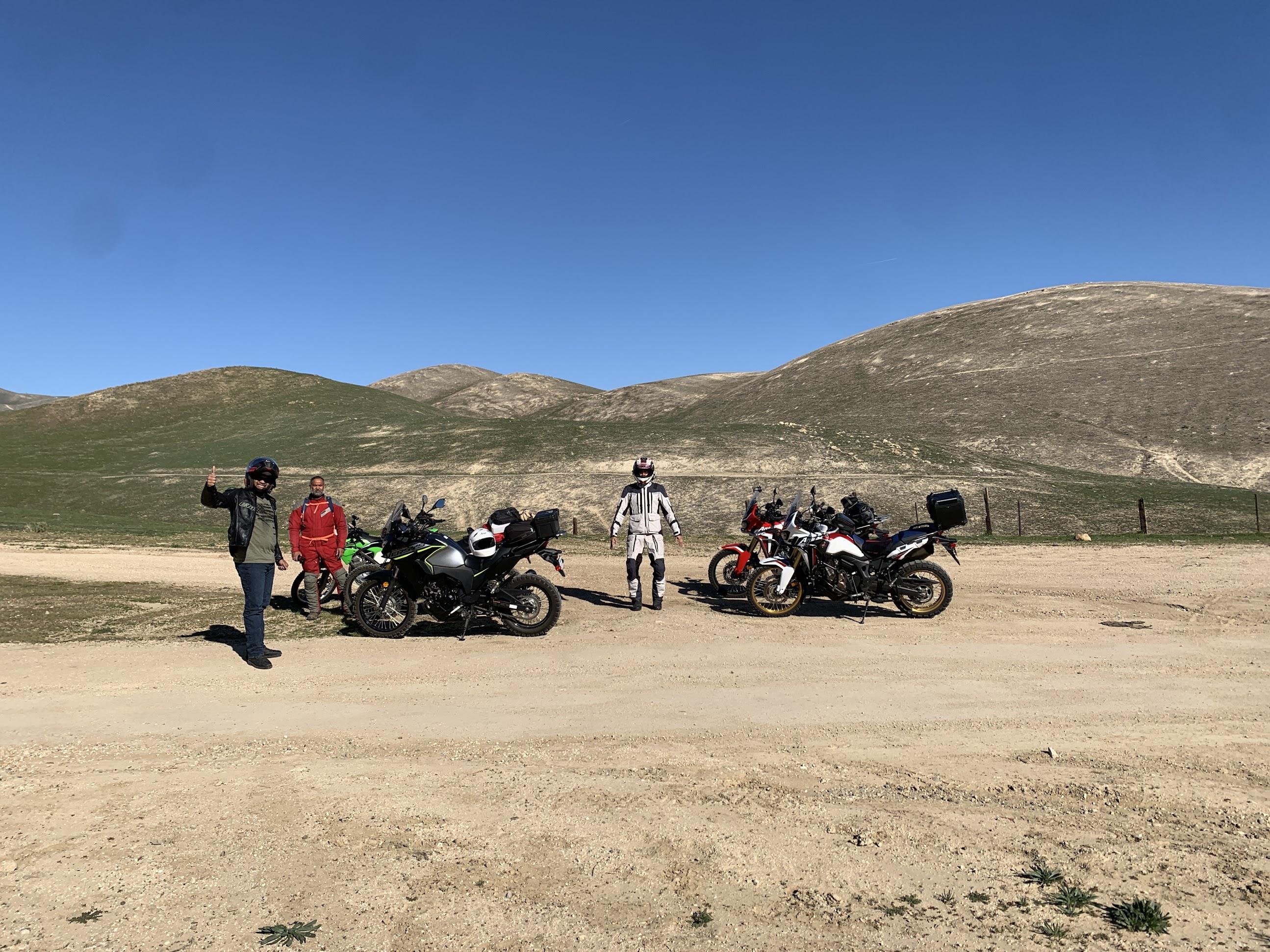 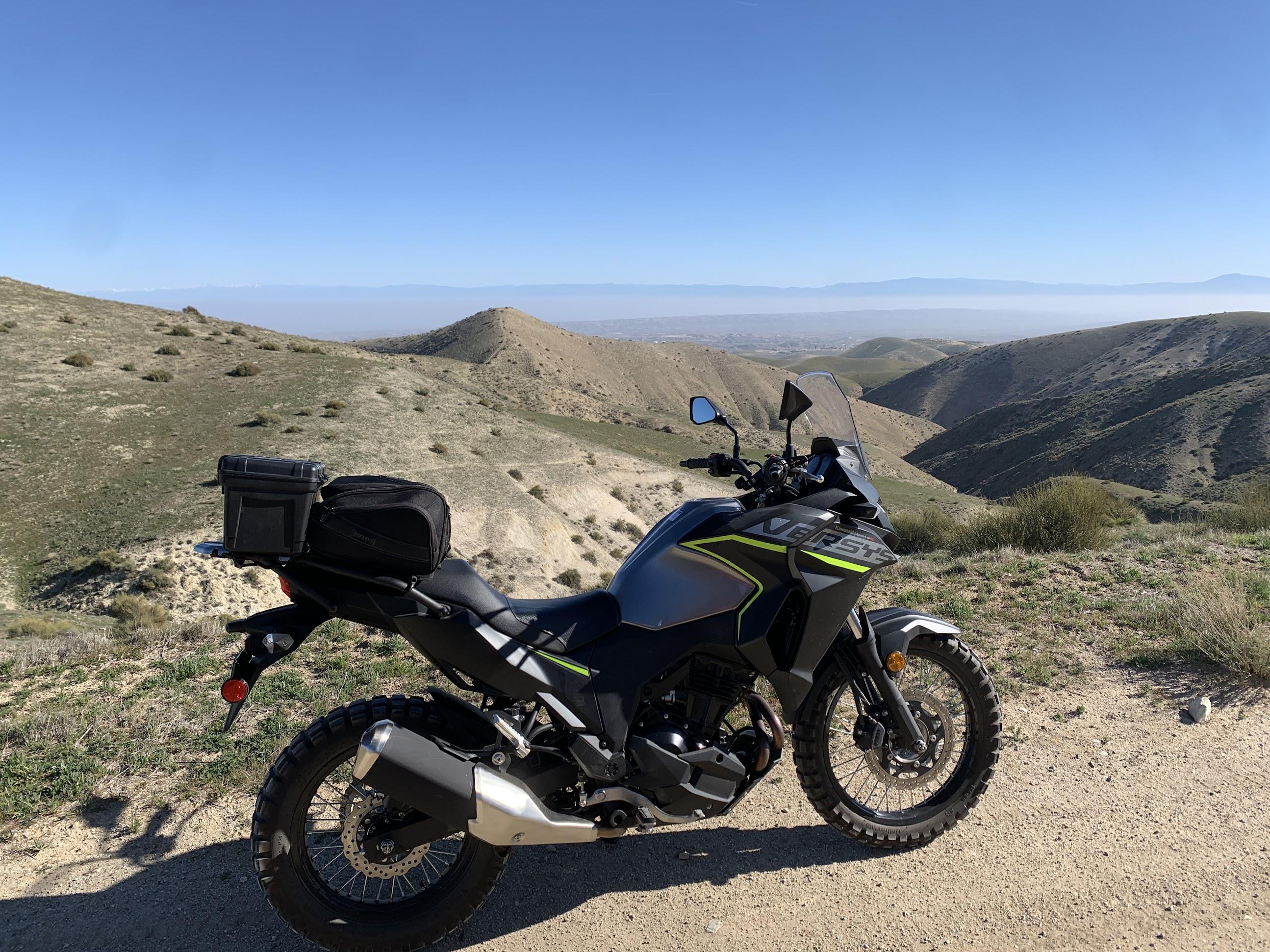 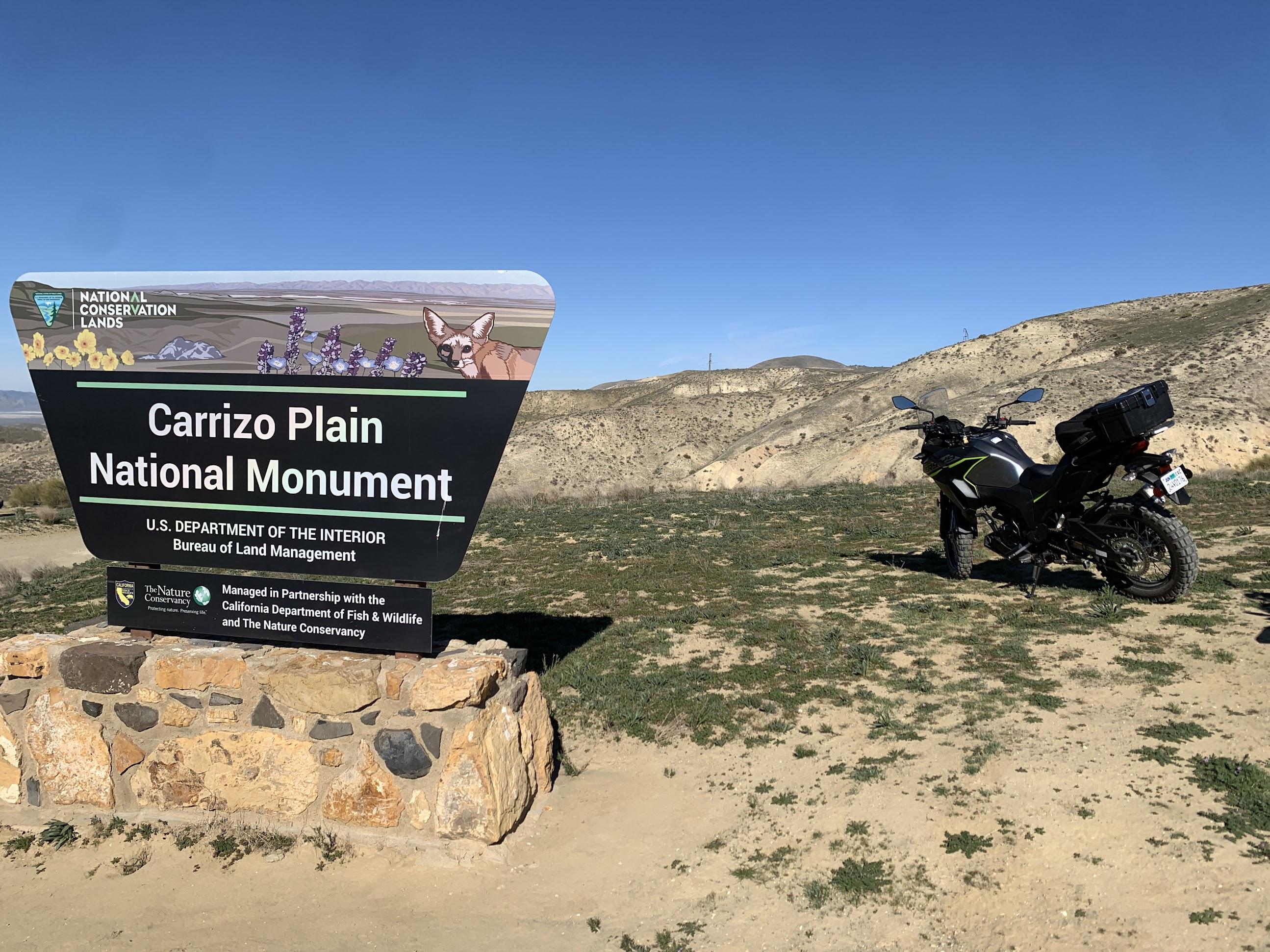 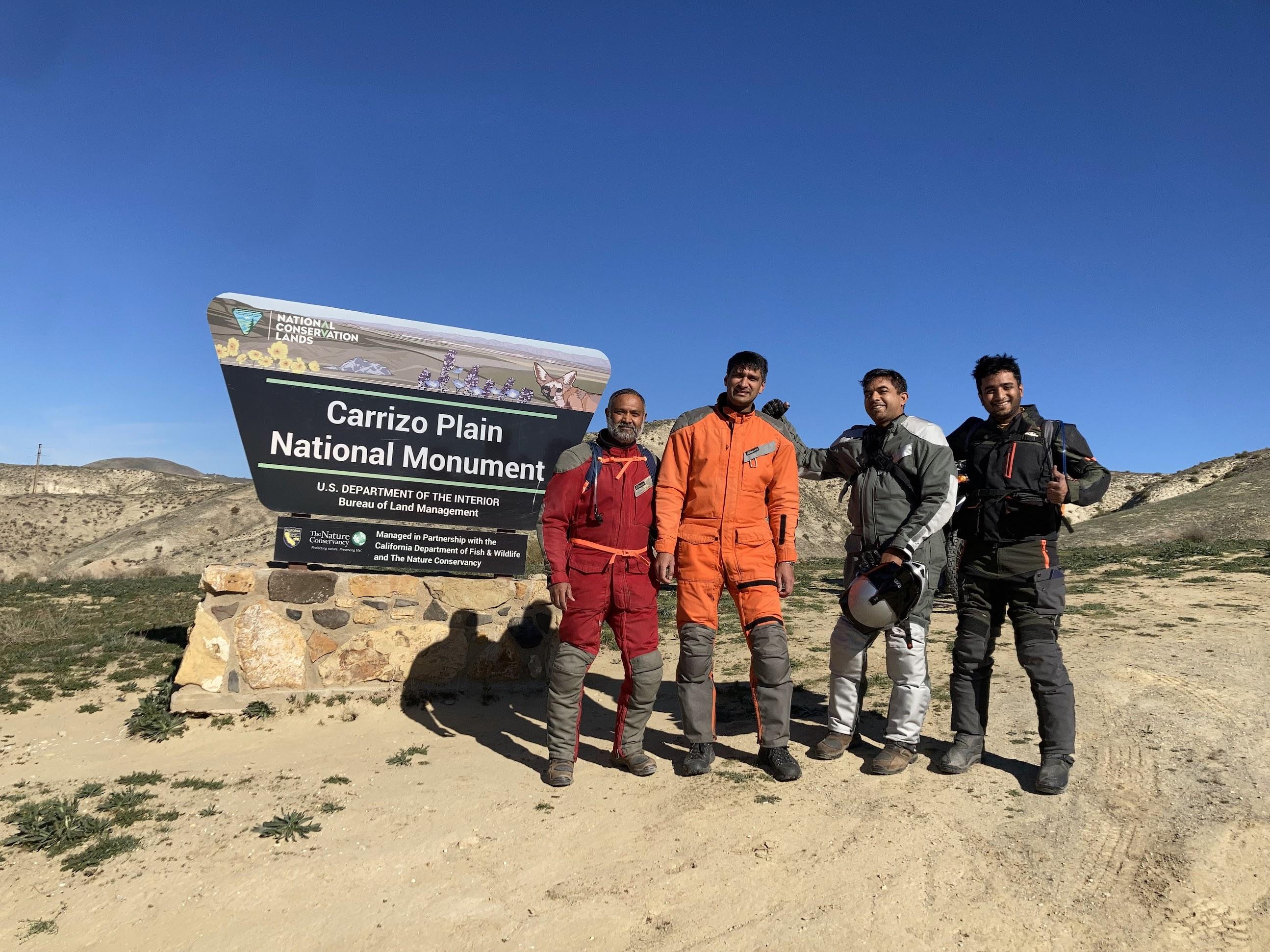 The descent down Hurricane road was probably the only tough part of the ride, and that was pretty mild too. 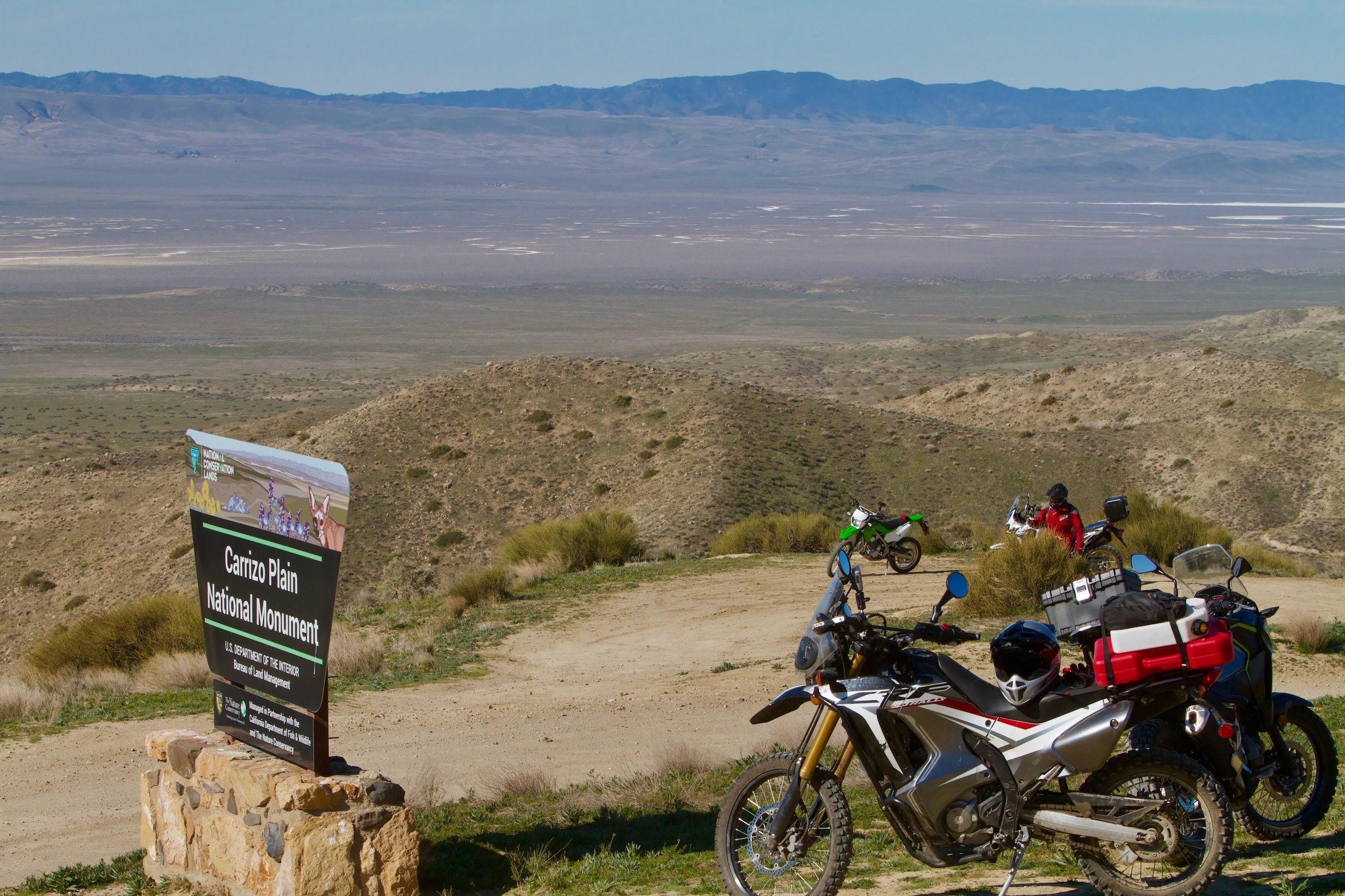 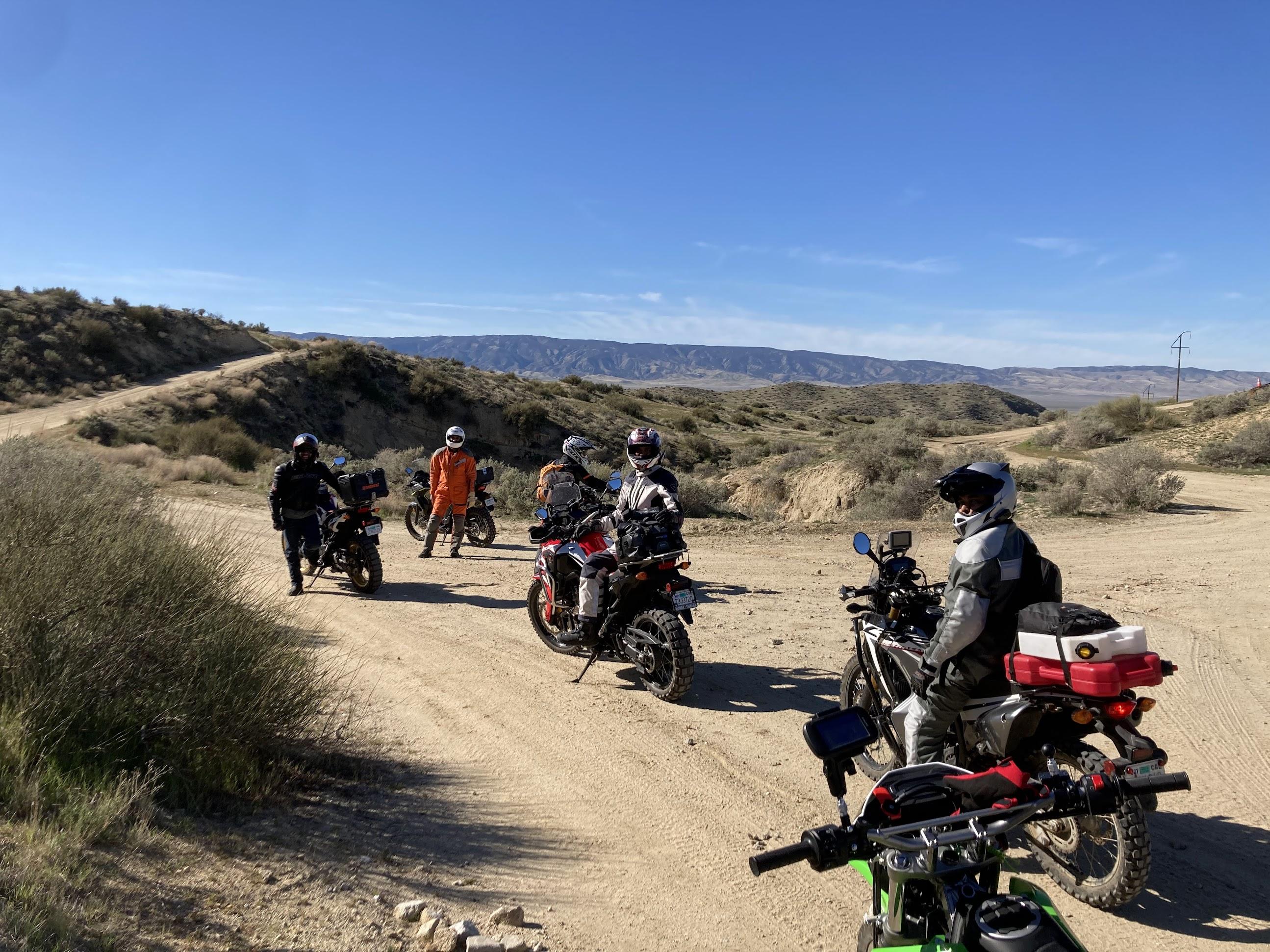 We then road Elkhorn Road towards the north which was a very peaceful and meditative ride. The dirt was relatively easy with no challenging obstacles. We were able to maintain a smooth speed through the turns and whoops and we then took a break at the Wallace Creek Trailhead. Here we walked over to the San Andreas fault and took some pictures. 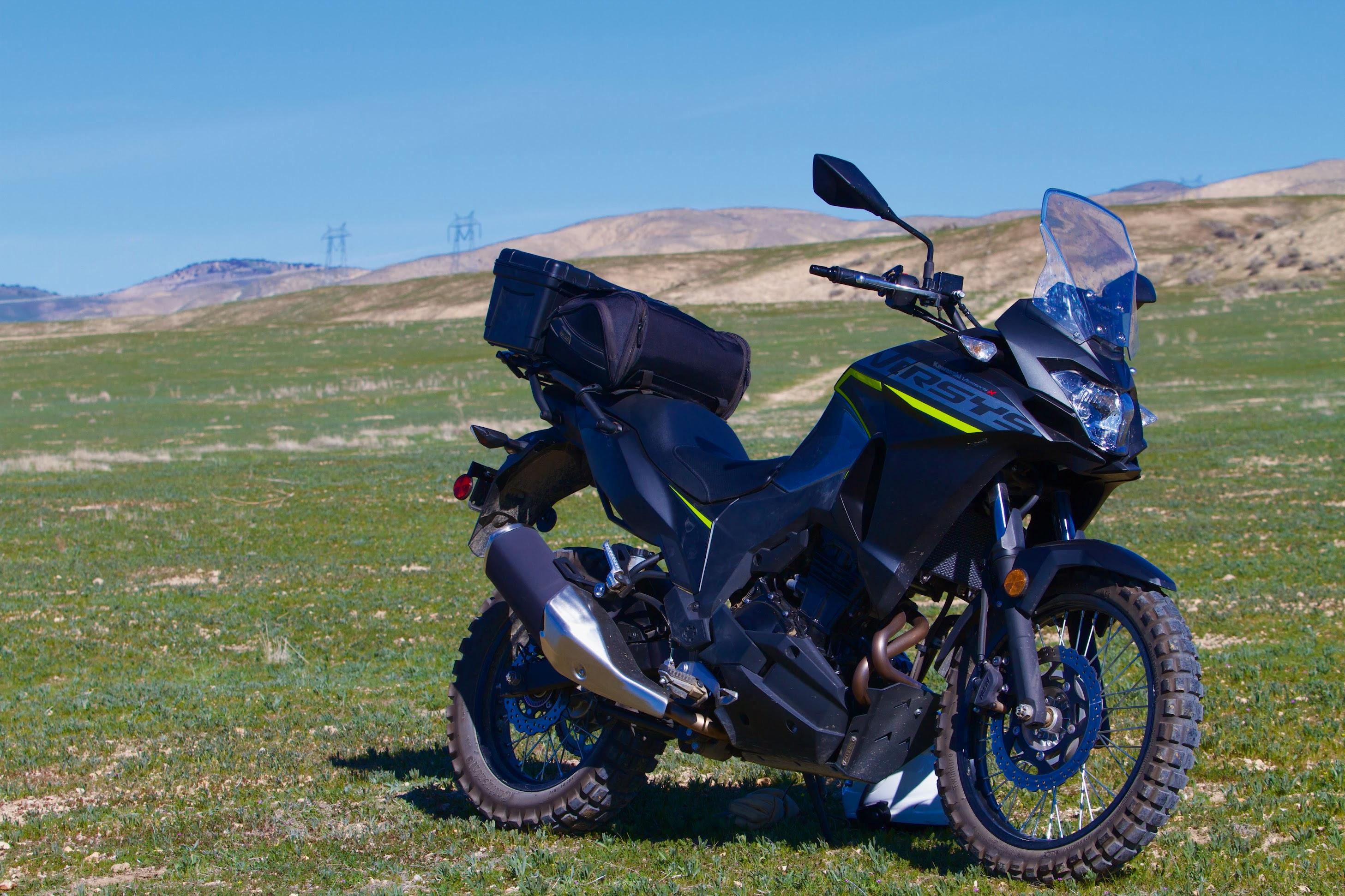 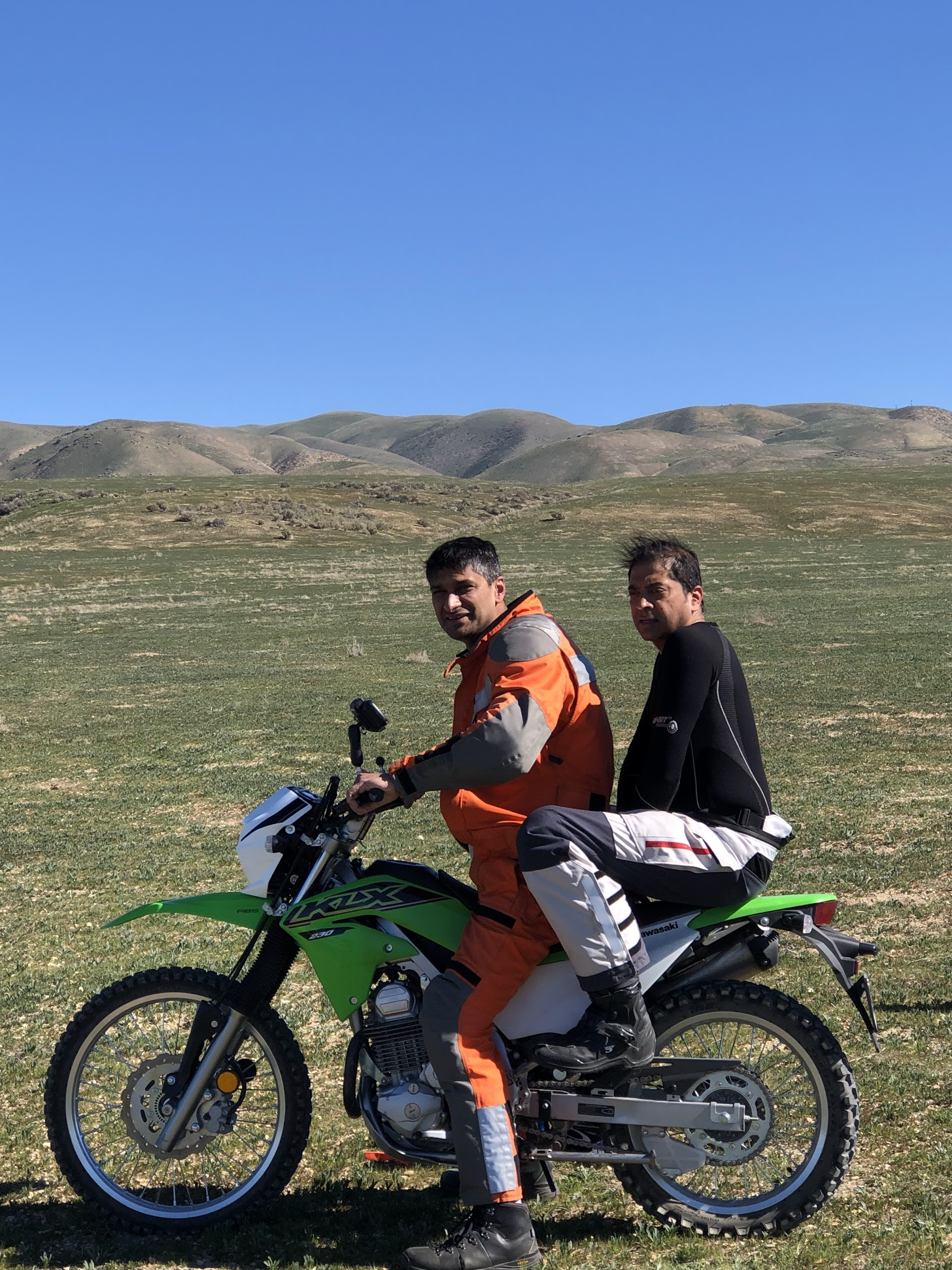 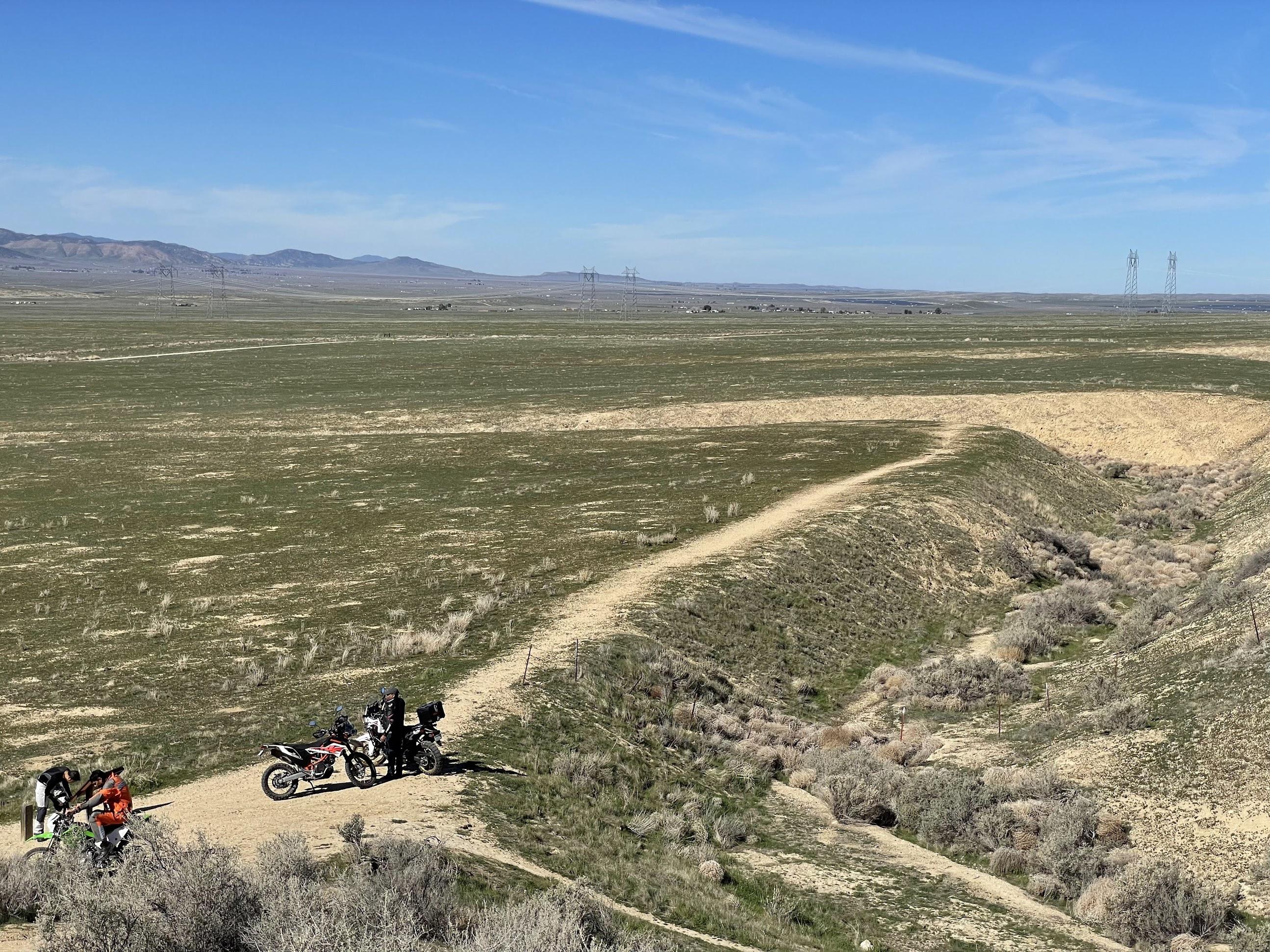 From there we continued on to San Diego Creek Road and eventually came to Soda Lake. 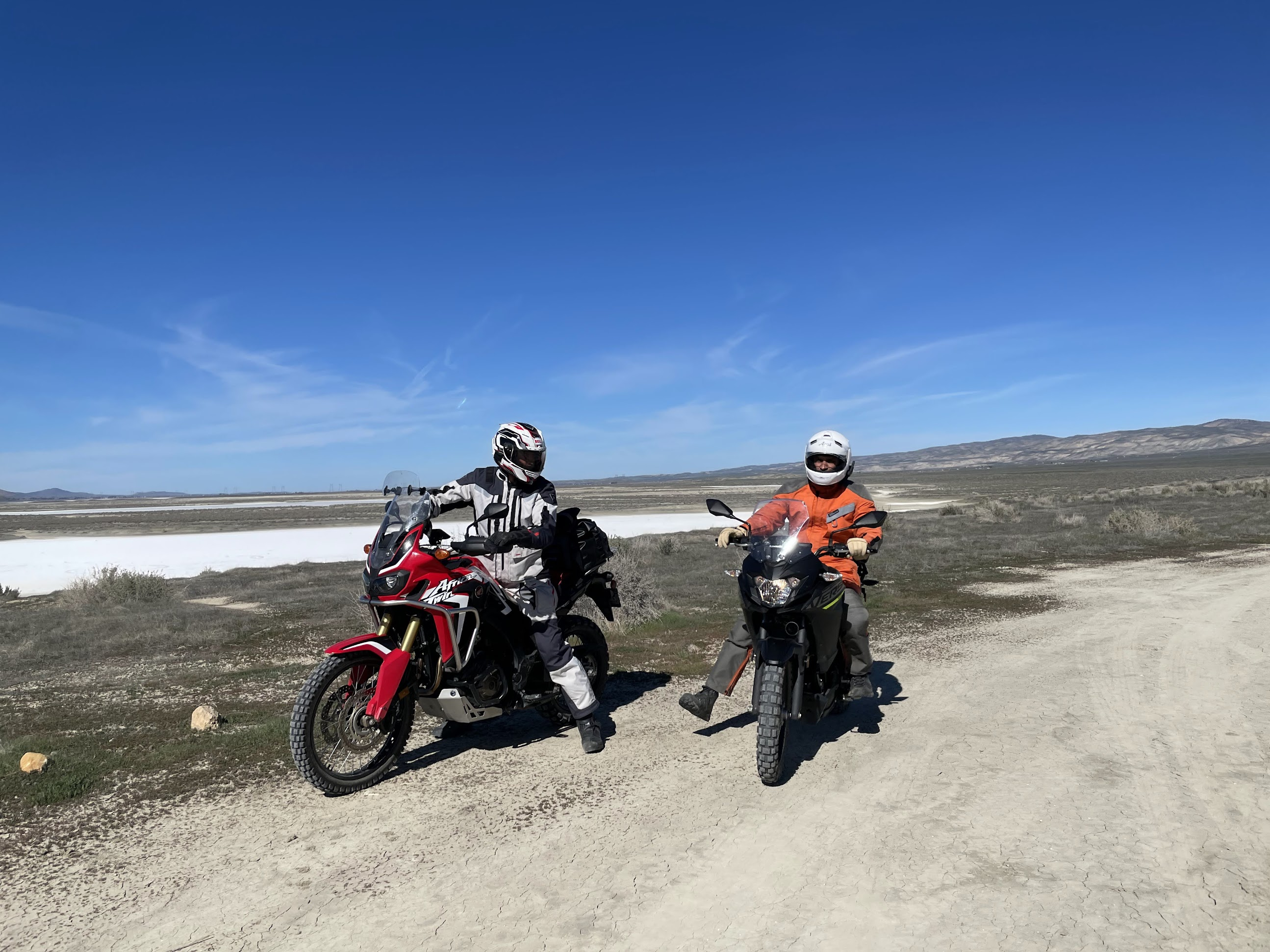 It was getting hot by now, so we decide to visit the Carrizo Plain National Monument visitor center. We took a break there and had a beer. The visitor center was under construction but it still had some impressive stuff. 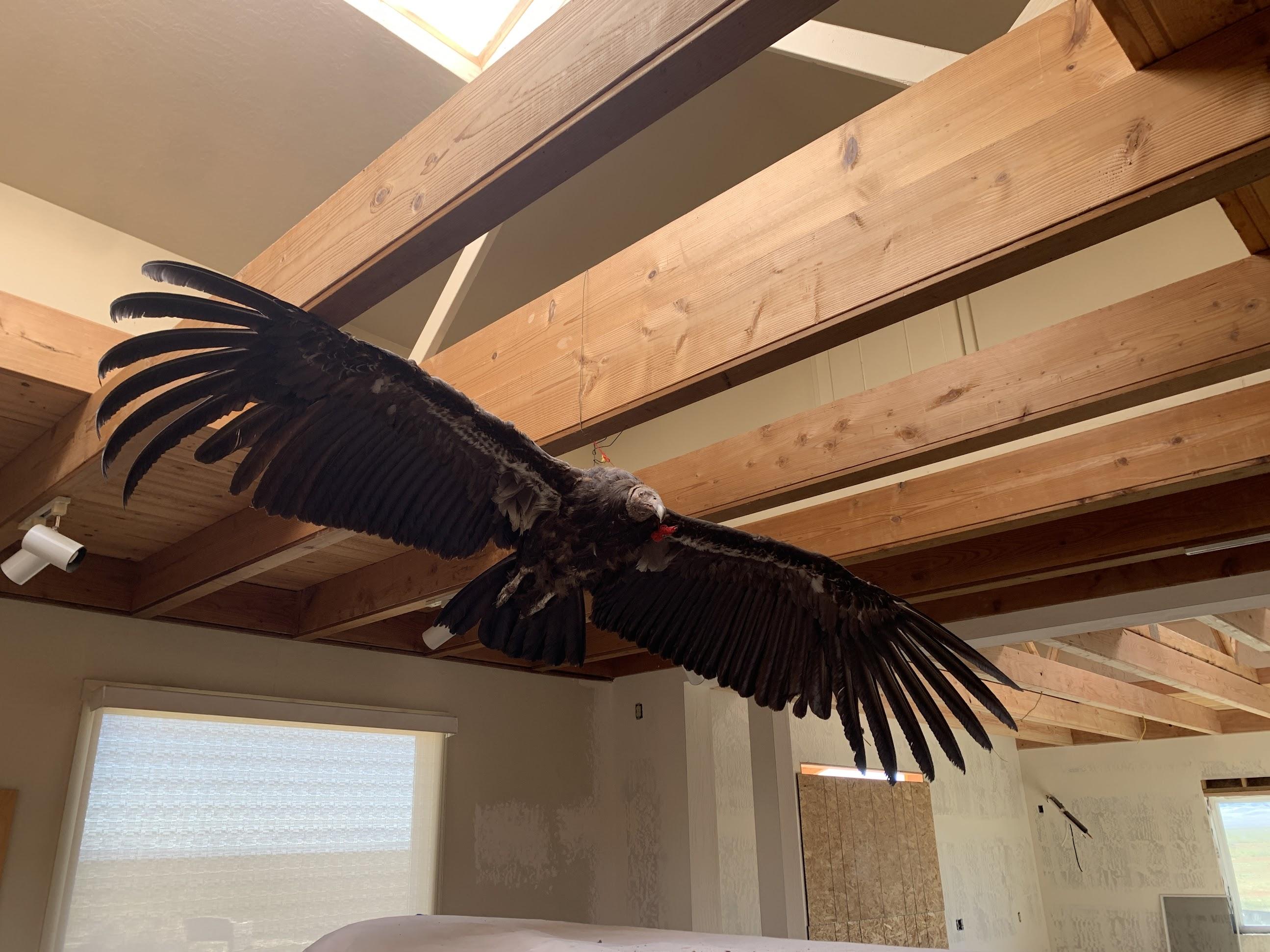 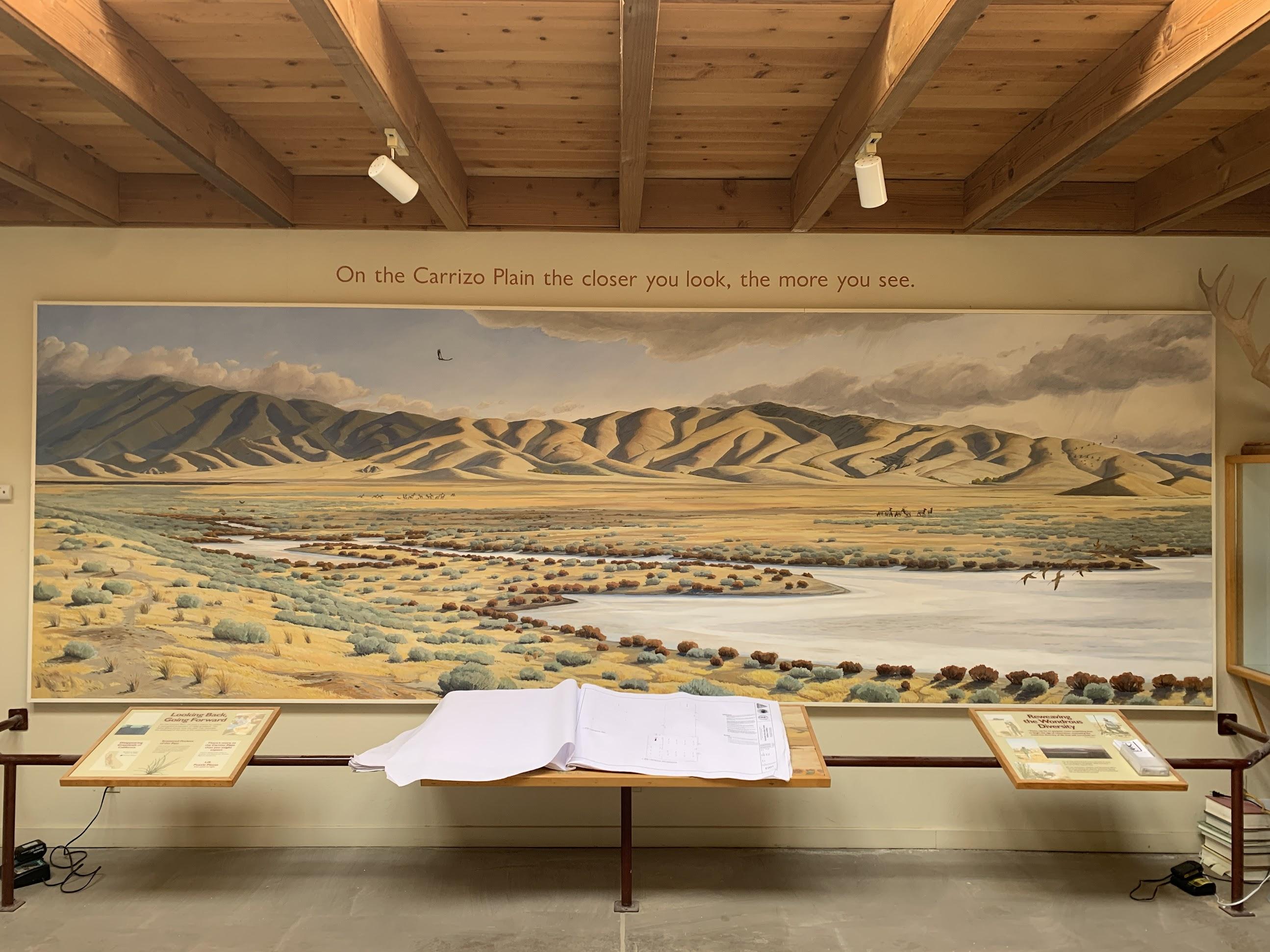 We decided to continue on with the ride from here. Andy had to go home early, so he left the group and started his ride home. Just a mile from the visitor center, Anil picked up a huge screw in his rear tire. The screw tore through his tire and tube and left him with a huge flat. 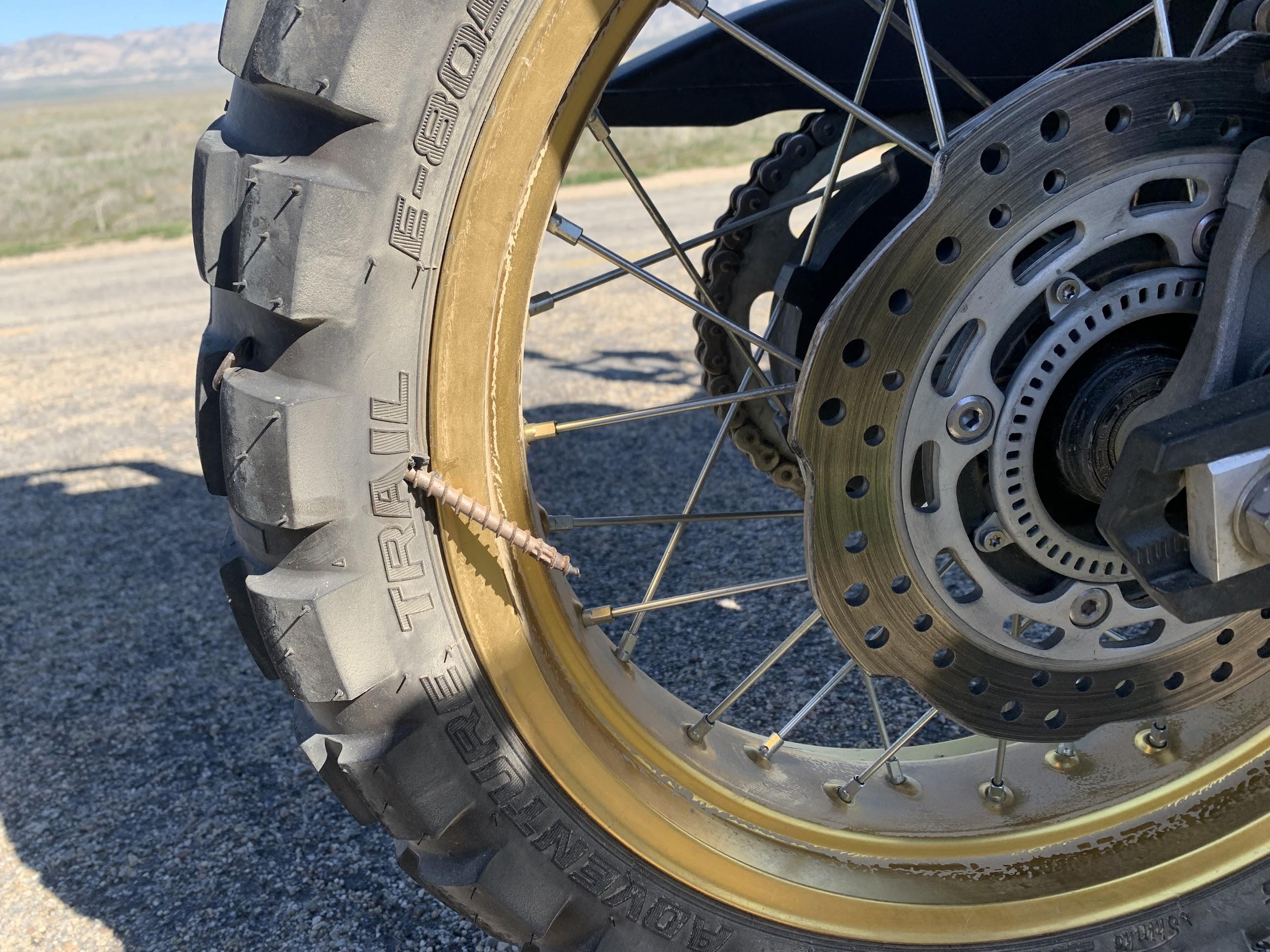 We removed the wheel. I had tire irons and with much effort, we removed the tire and the tube. The tube had a huge hole in it and we tried to patch it with a kit that Gokul had. Impressively none of us has a spare tube! 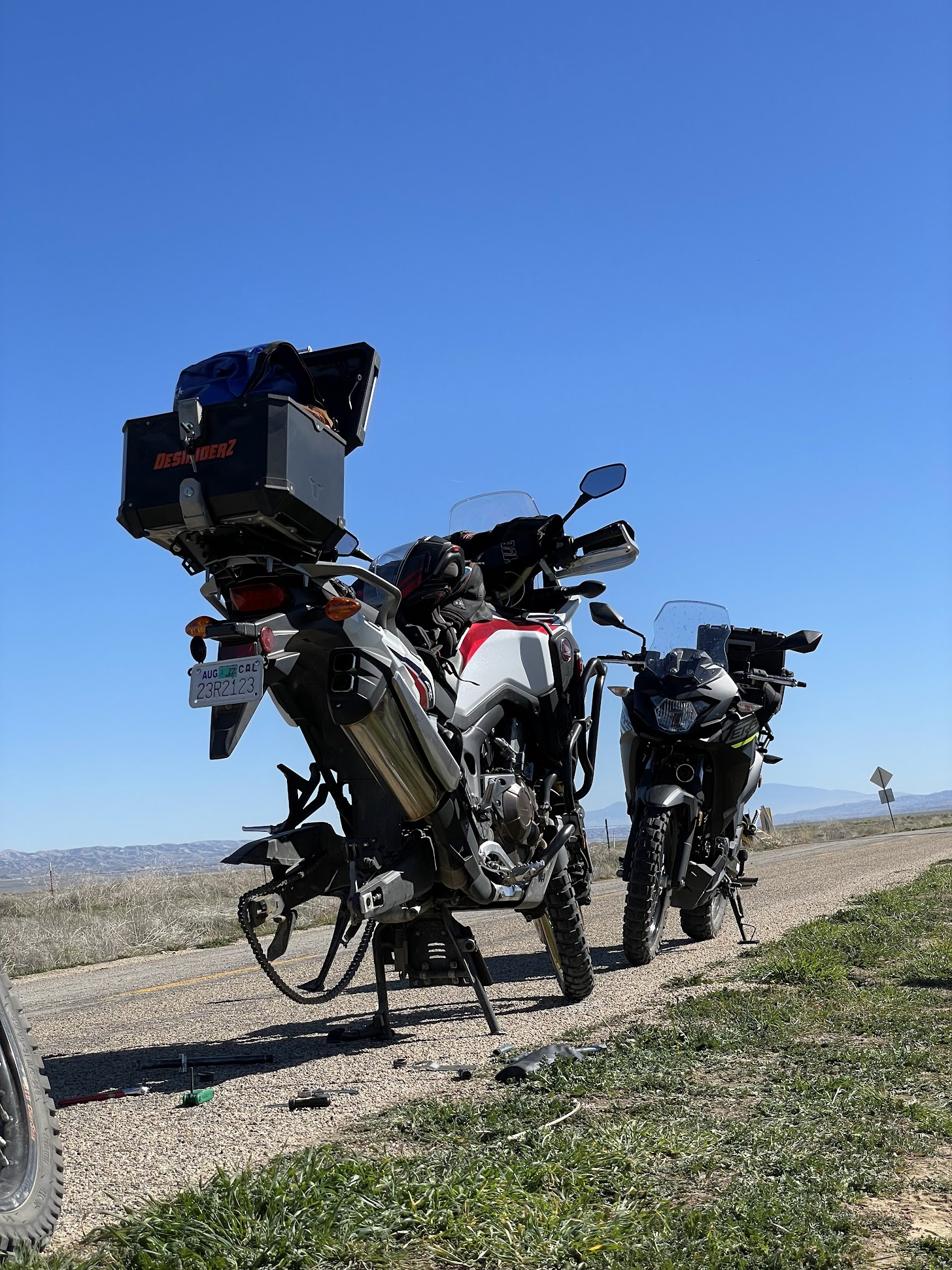 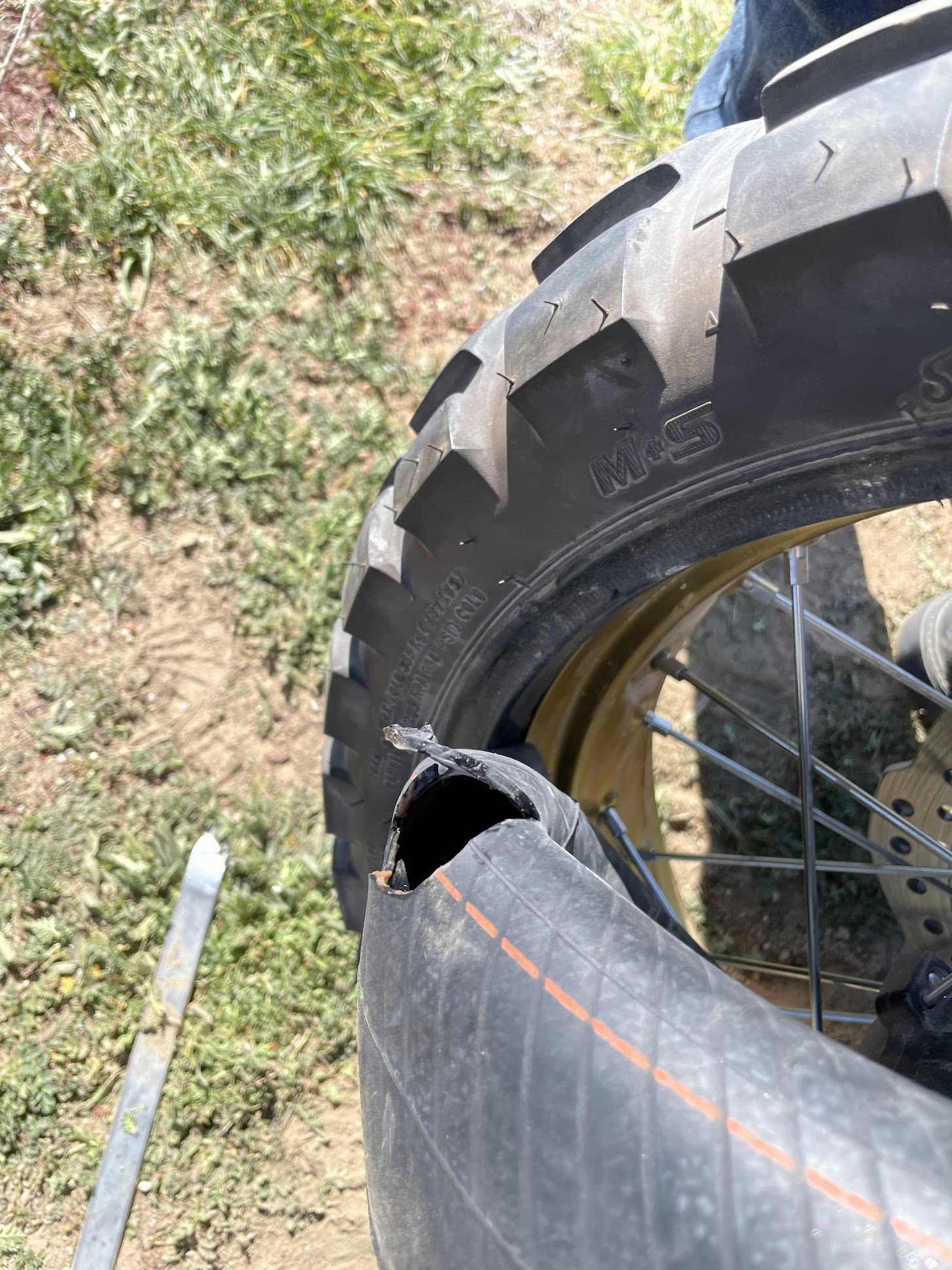 The patch would not hold air, which was sort of obvious to us all from the beginning. Anyway, at this point we gave up, disappointed, and Ayon called AAA to come rescue the bike. We had spent over 2.5 hours trying to fix the bike and everyone was exhausted. I decided at this point to make it back home instead of continuing with the ride. I was the only “rider” in the group left, the rest were going to haul their bikes back. Mahesh, Gokul and Ayon rode Soda Lake road down south and back to the hotel, I started riding north and took the freeway back home.

The ride back home was easy, but extremely boring. I had lunch at a McDonald’s on the way and made it back home around 7PM, exhausted. Anil was able to get the AAA truck to rescue his bike and drop it off at the hotel. He got a ride with Gokul and Mahesh in the Rivian as they came back to the Bay Area. Anil went down back to Taft the next day with a trailer to retrieve the bike.

Interestingly Mahesh, Ayon and Gokul went back over the same route that evening in the Rivian and got some excellent pictures. 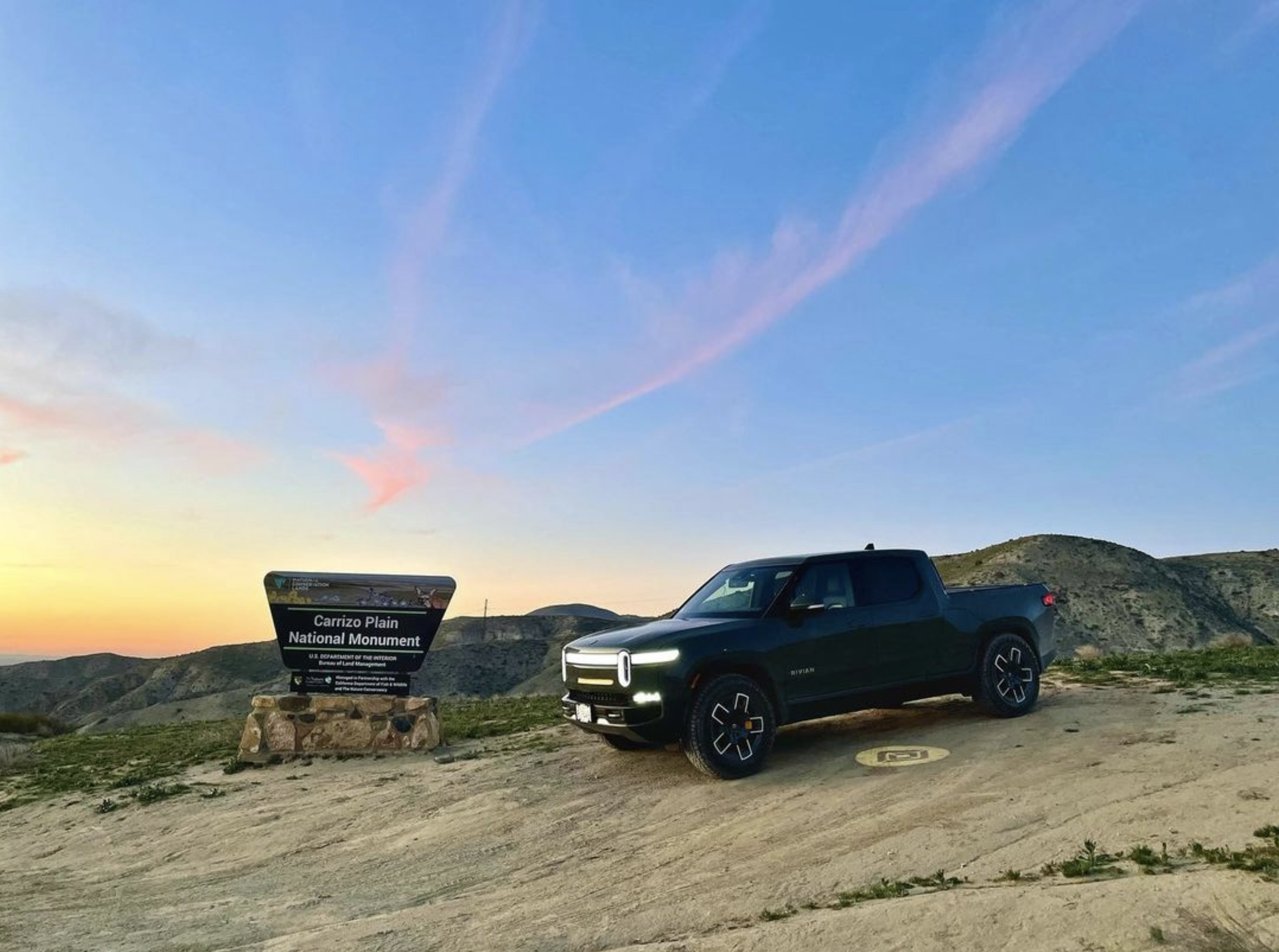 This trip did not go as planned, mainly because none of us had spare tubes with us. Andy did have some spare tubes, but he left before the incident. Lesson learnt, I guess, for next time – always carry spare tubes. This trip also demonstrated how people react under pressure and why riding longer trips is a two sided coin – it’s all fun and games when the going is good, but it sucks when there is a snag.