The lure of “dual sporting”… Riding off into the unknown, where the paved road ends and the wilderness begins. Like Springsteen’s song from Philadelphia, “It’s just you and I my friend”. I turn 40 years young in 2019 and it seems like a big moment to celebrate. While lots of trips have been planned for the birthday, a celebratory motorcycle trip is sure called for.

I have always wanted to ride the SheetIron 300 – a dual sport ride organized by the Oakland Motorcycle Club through the Mendocino National Forest. Unfortunately due to the 2018 Ranch Fire the 2019 Sheetiron was canceled. And that’s how, as sort of “the next best thing”, I signed up for the North Bay Motorcycle Club Lost Coast Dual Sport Ride. The ride starts and ends in Ukiah and we spend the night in Fortuna, riding through the Lost Coast on Day 1.

Here is the map of the complete route. Mostly public roads, but it does go through some private lands, so explore at your own risk.

Ayon joined me on this ride on his R1200GS. We left Fremont late Friday night (September 27th) and reached Ukiah around midnight. Traffic was very light because it was so late at night. I was impressed by the KTM auxiliary lights; they cast a bright beam of light down the road. We checked into our hotel (Motel 6) which was a basic, run-down motel in a not-so-nice neighborhood of town. Notice the trash bag with the Coors cans… 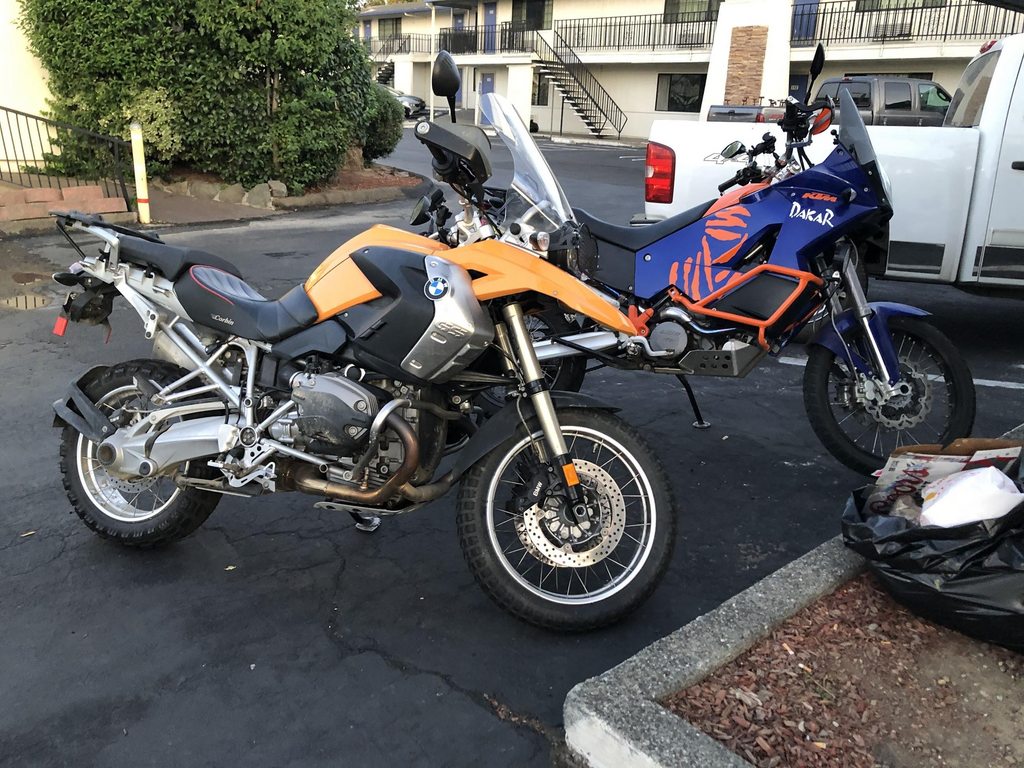 The next morning, Saturday, we were up early and the staging point for the ride was close by. We gassed up and went down to registration. I checked in my bag with the MC and they trailer all luggage to the end point. 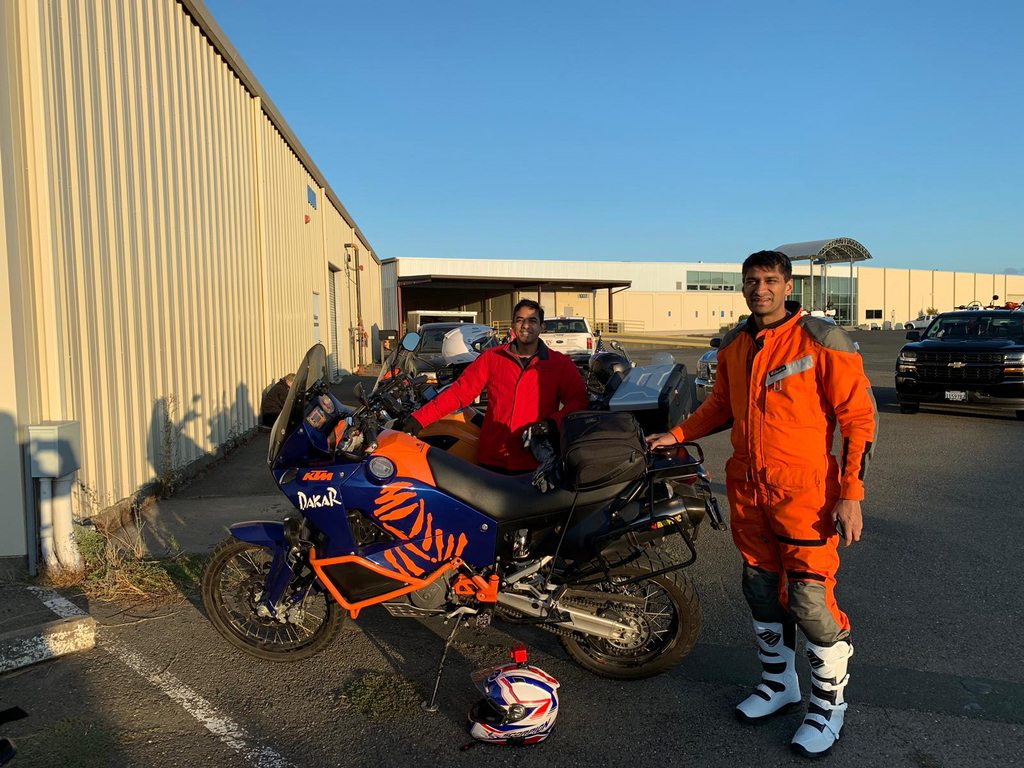 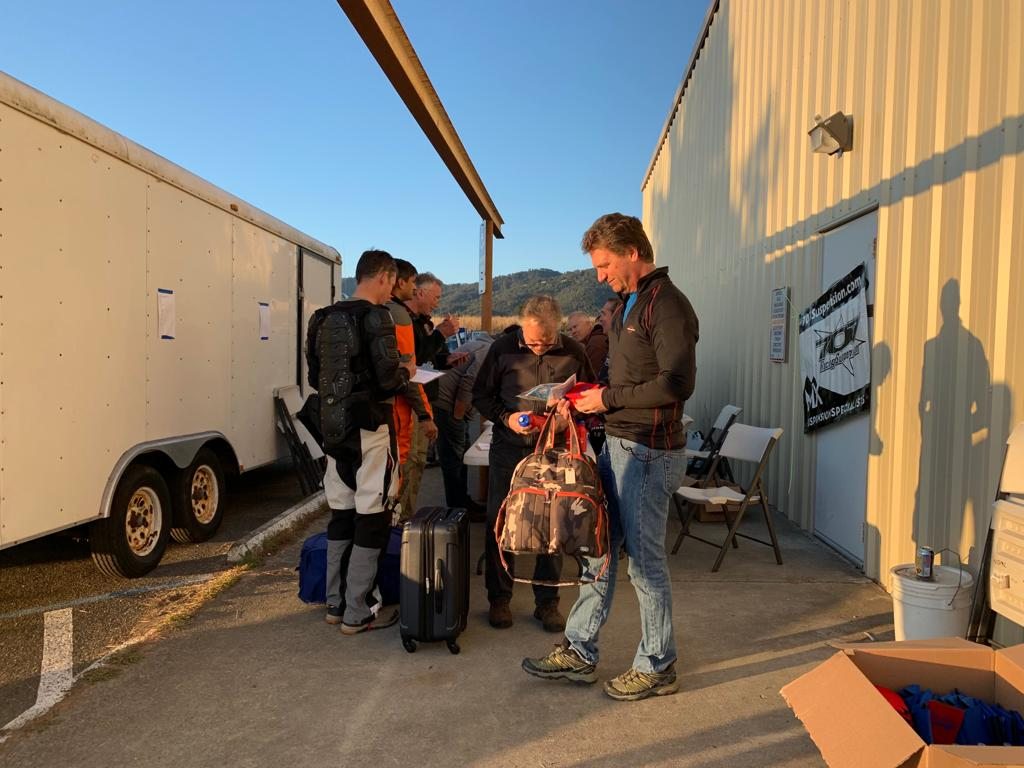 Some guy was checking in a regular India style suitcase. Ayon did not miss the photo opportunity.

Our first road for the day was Low Gap Road. Reasonably easy 30 miles of dirt, but the temperatures were still cold in the morning. My bike read 44F at the top of the summit. 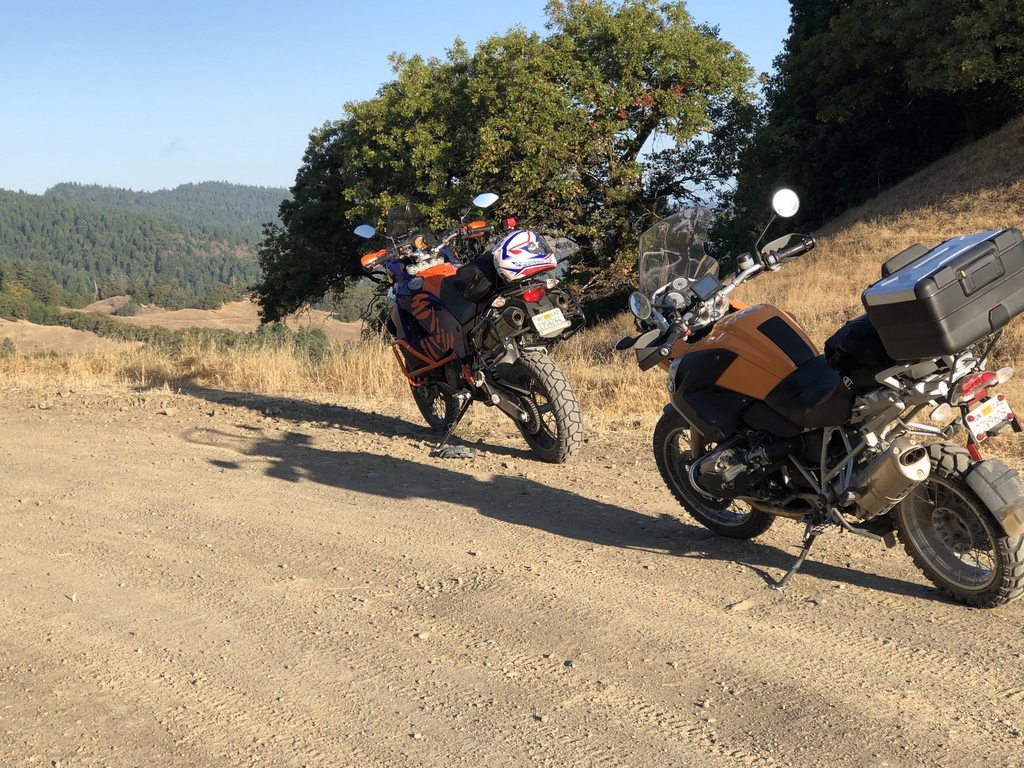 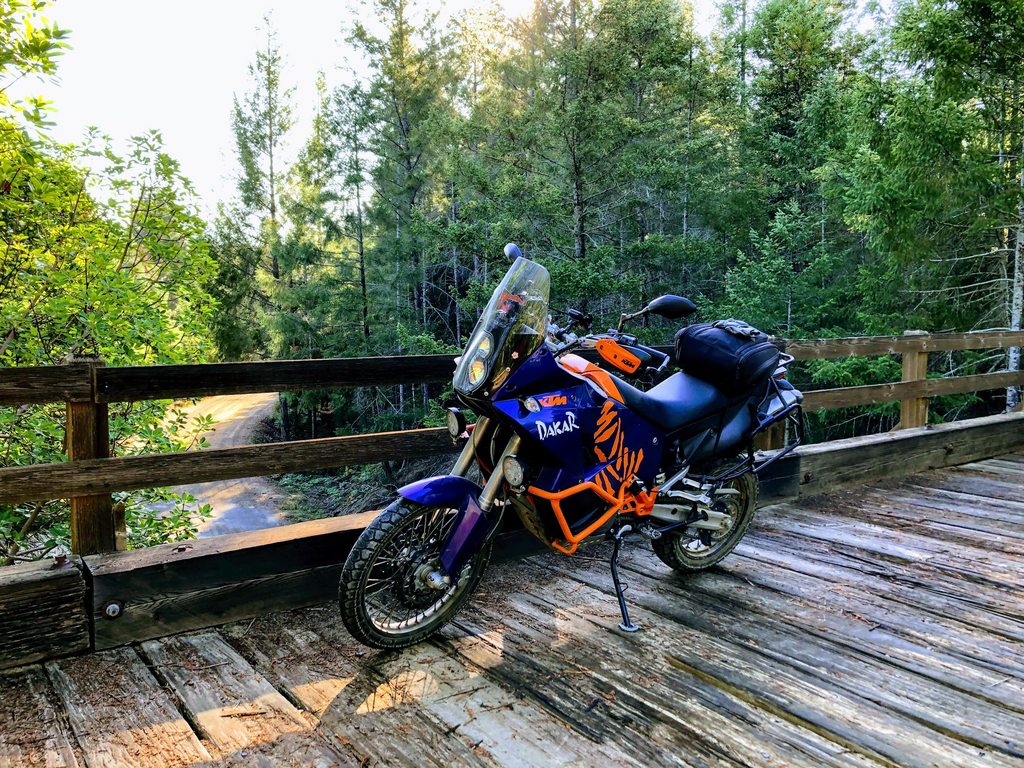 Interestingly there was a guy who did the whole ride on a Harley Softail. He did just fine. But the lady with him on the BMW GS broke her ankle in a get-off and had to be rescued by fellow riders. 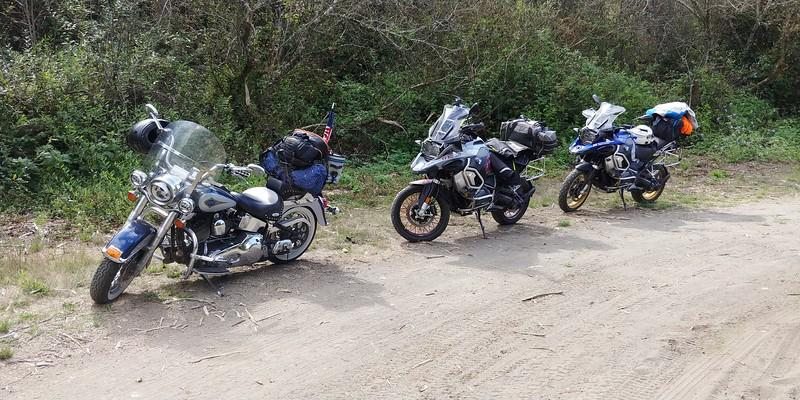 Dada lost it on somewhere Low Gap Road, but no harm done, the GS is a tough bike. 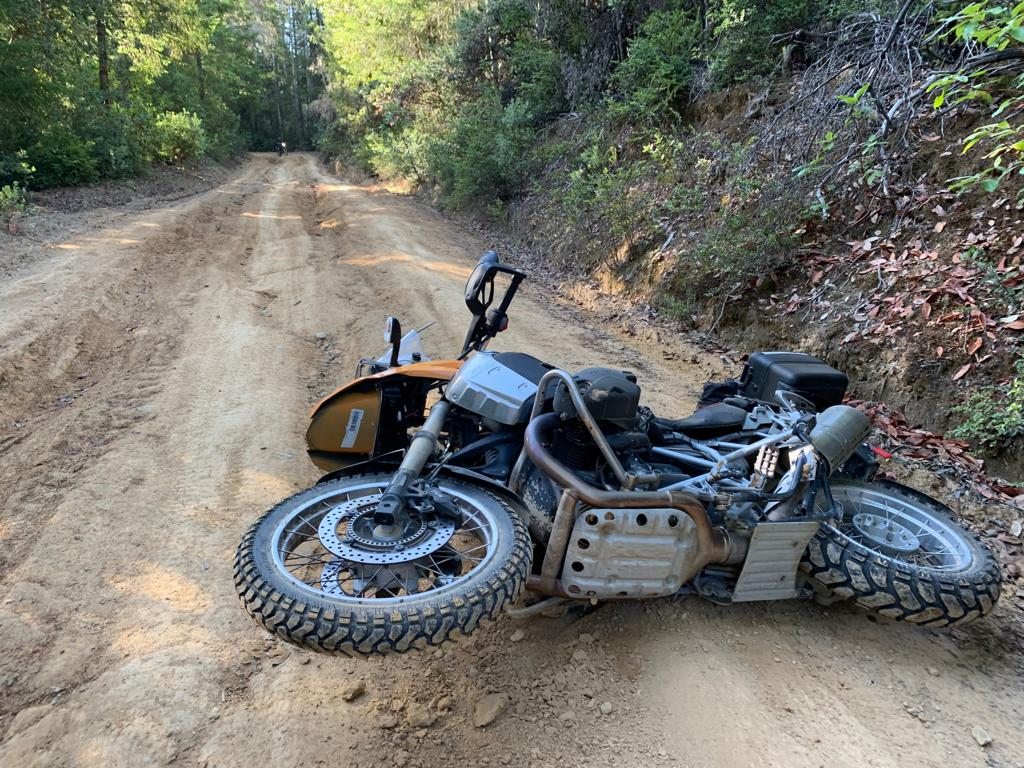 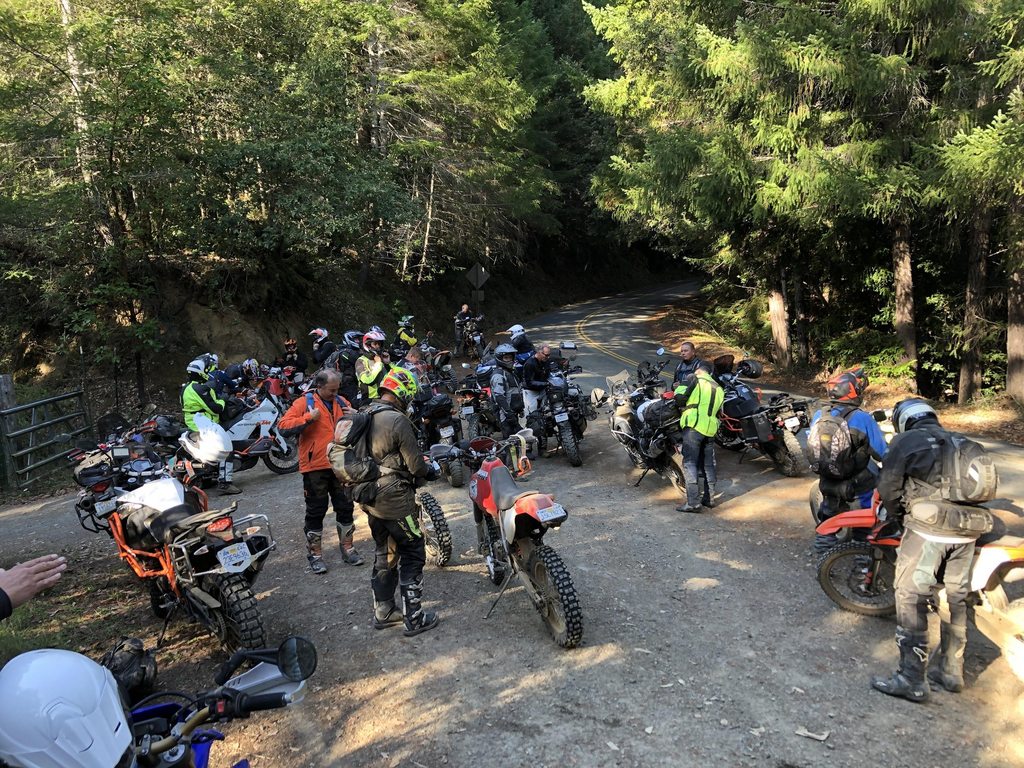 From Low Gap Rd we rode to the Coast and took Hwy 1 till Fort Bragg. We stopped in Fort Bragg for gas and Ayon decided to get a quick bite at Cravingrill which is small quick-serve Middle Eastern place along Hwy 1. The food was awesome there – the babaganoush was superb. We spoke to the server there and he was from Pakistan. It turns out that a lot of people from Pakistan come to Fort Bragg to live and work!

Our lunch stop for the day was this private beach a few miles north of Fort Bragg. Lunch was simple, some hot dogs, chilli and snacks, but it was fun hanging out with the rest of the crowd there. We rode up to the ocean front and took some pictures. 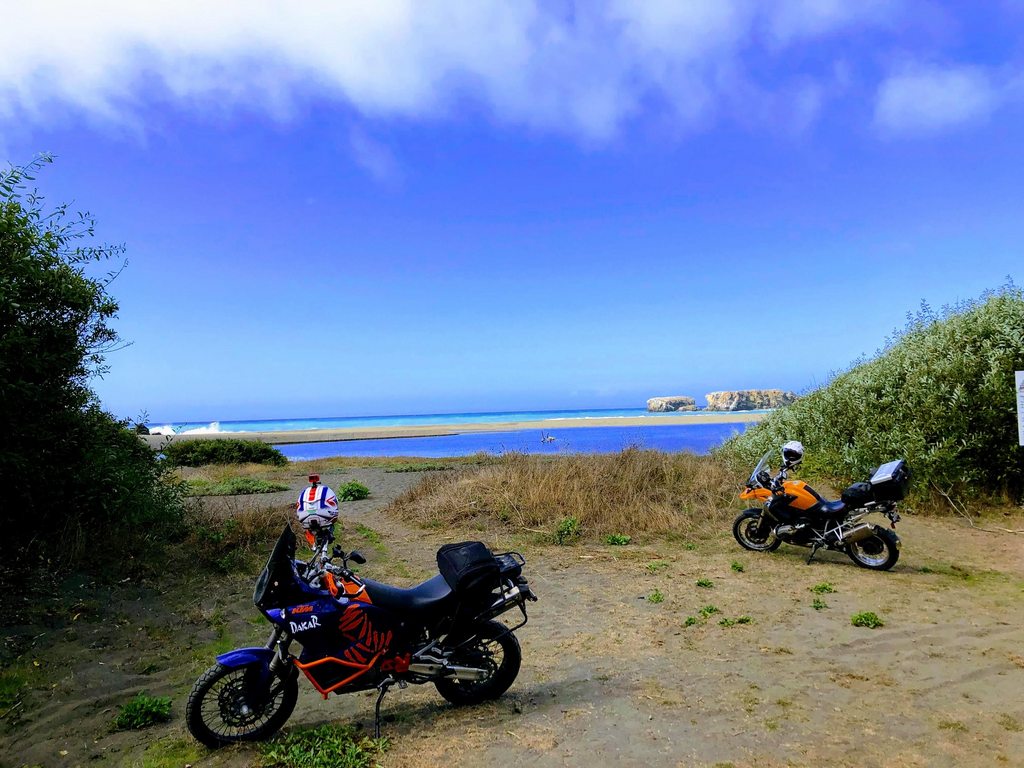 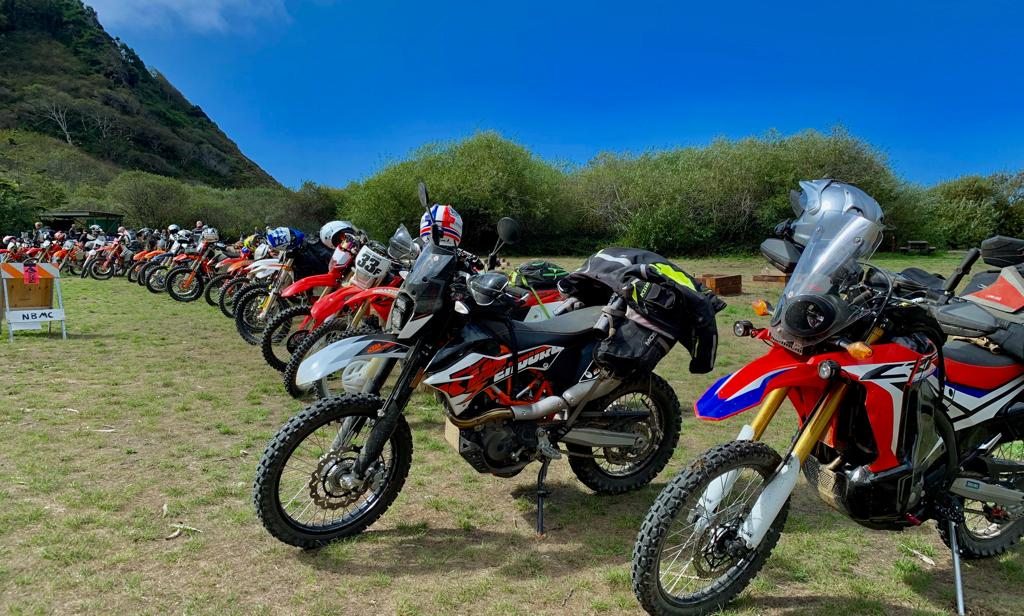 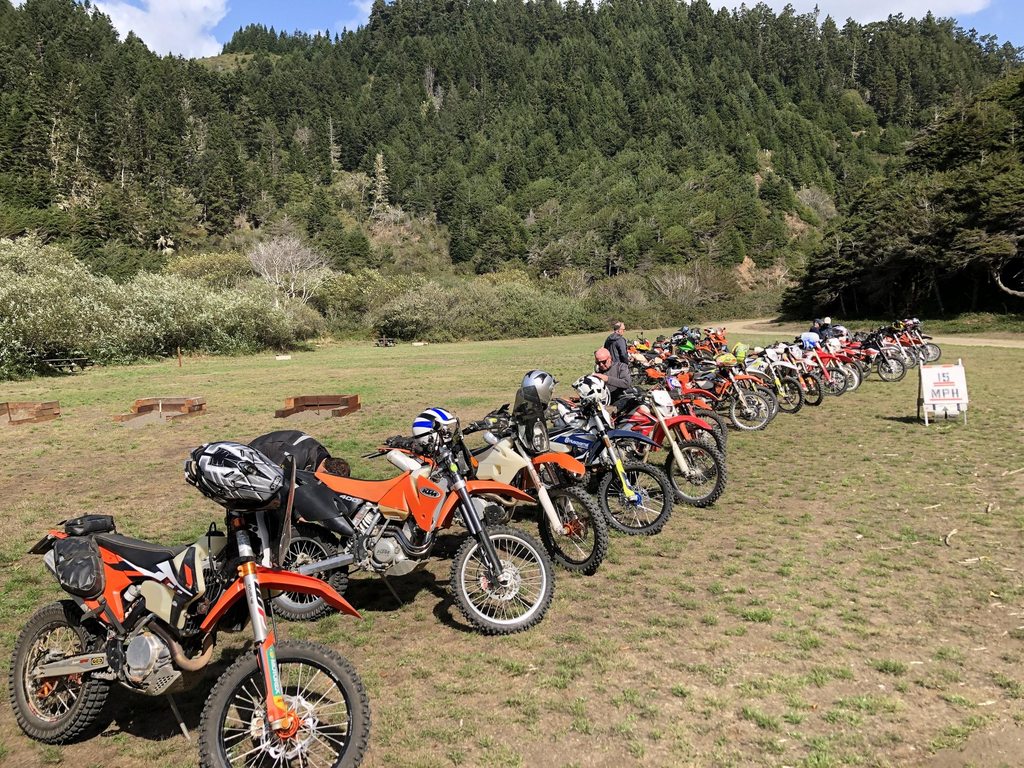 After lunch we tackled the famous Usal Road and it did not disappoint. Beautiful views of the coast and a long way through the coastal redwoods. It was tiring, but fun. 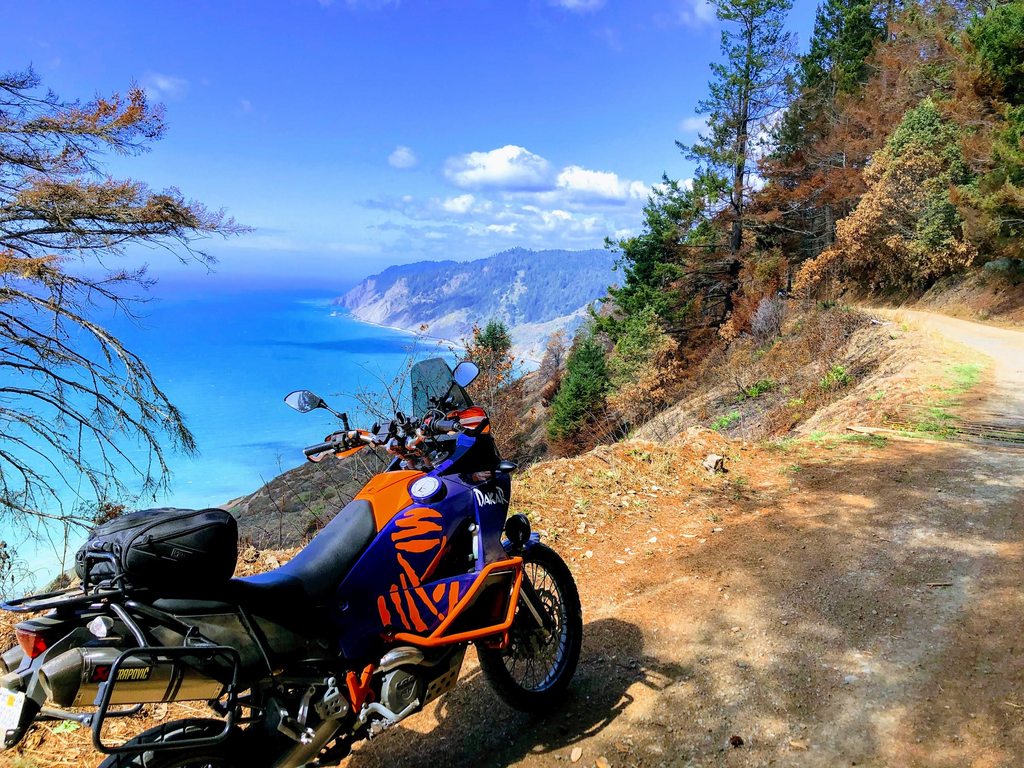 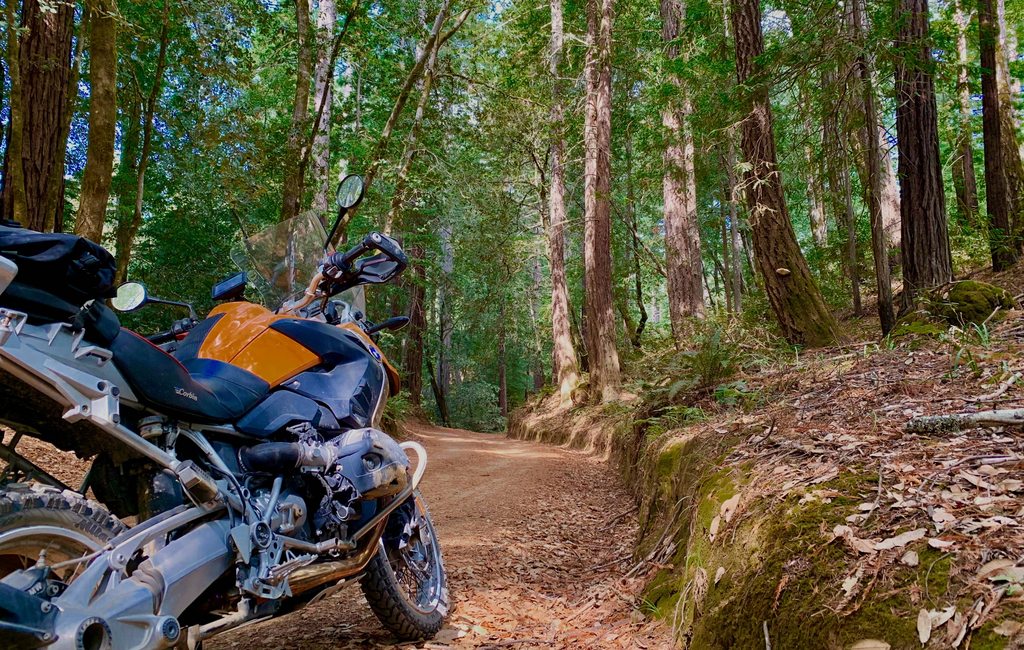 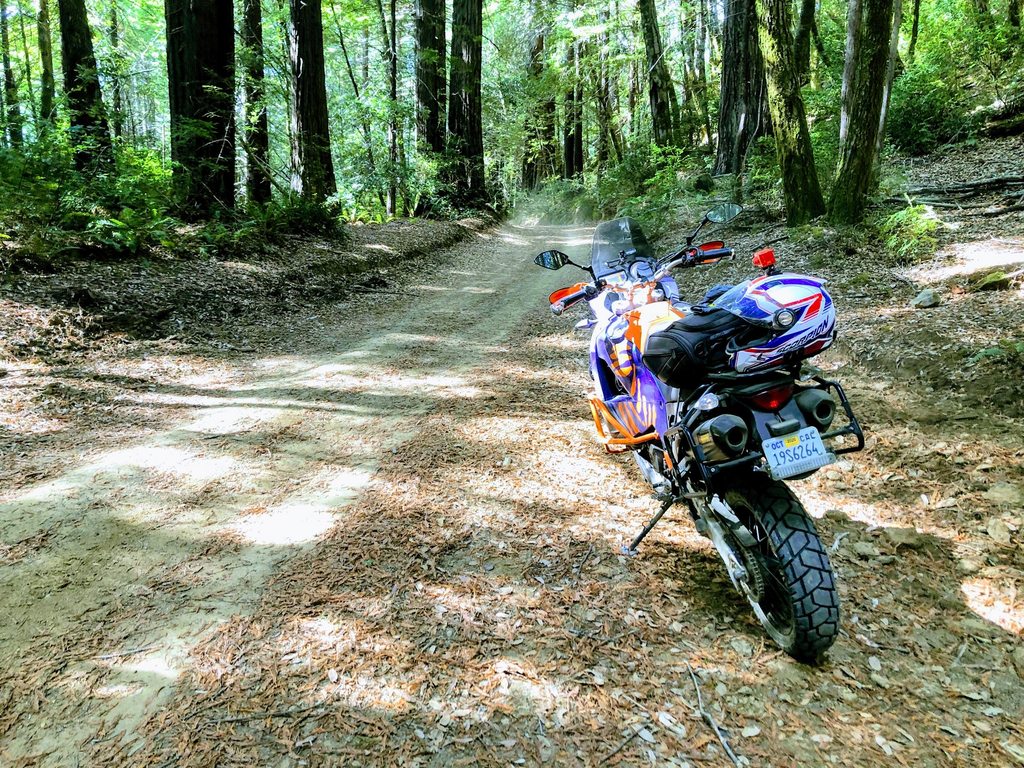 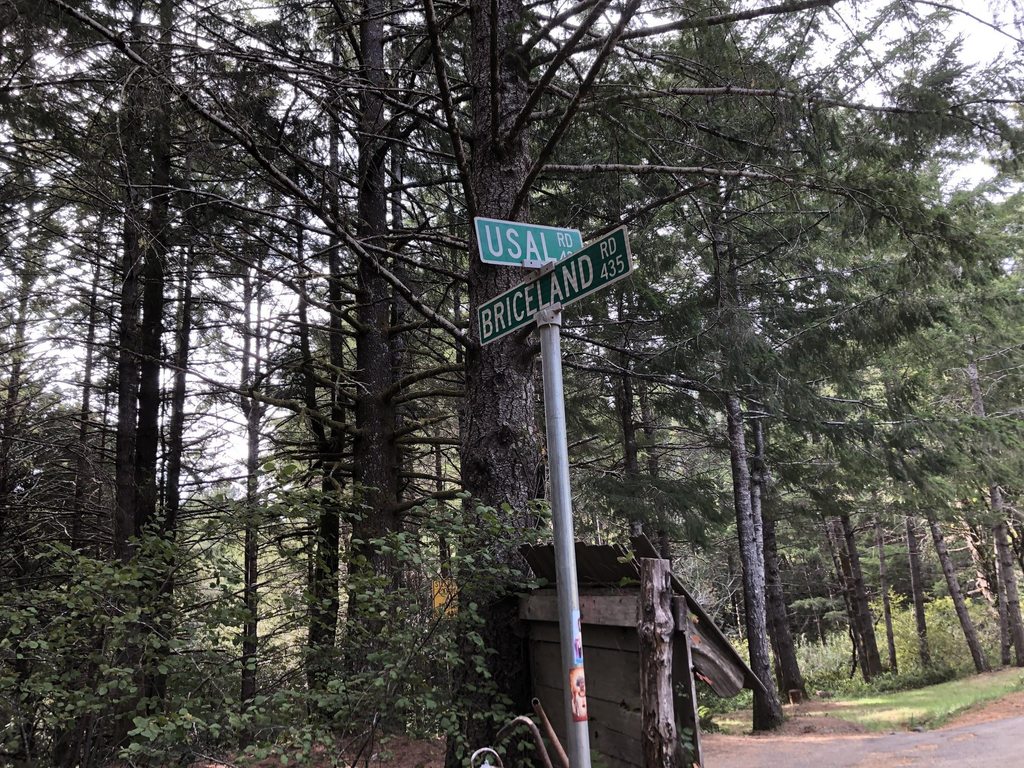 We then rode up to Shelter Cove for a few pictures and made our way back to the hotel for the night. The official route for the day followed Kings Peak Road to the Lost Coast (see RR34), but we were tired by that time and decided to head back to the hotel on Hwy 101. 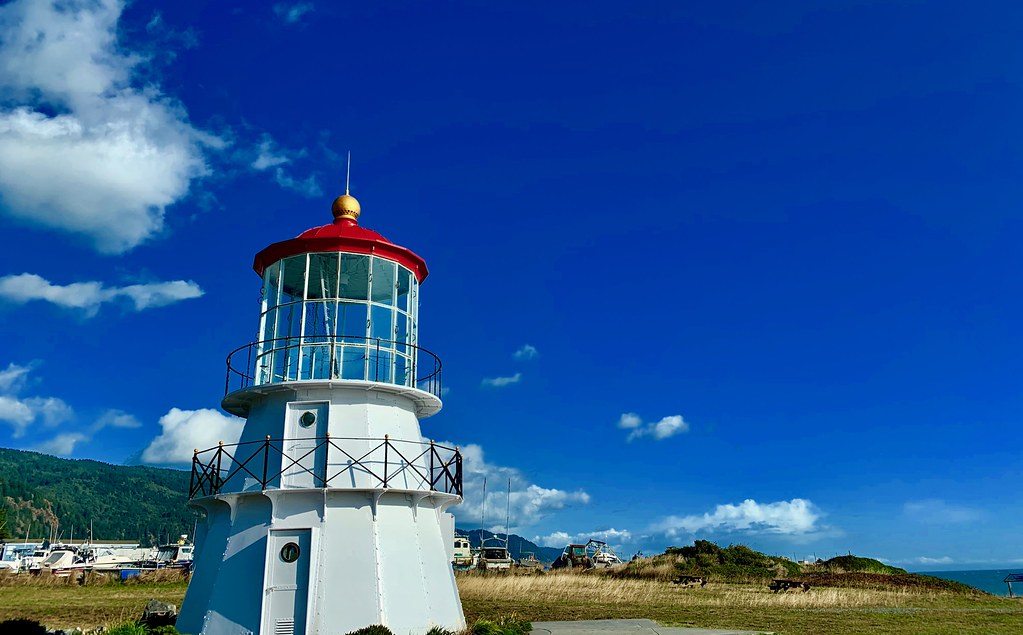 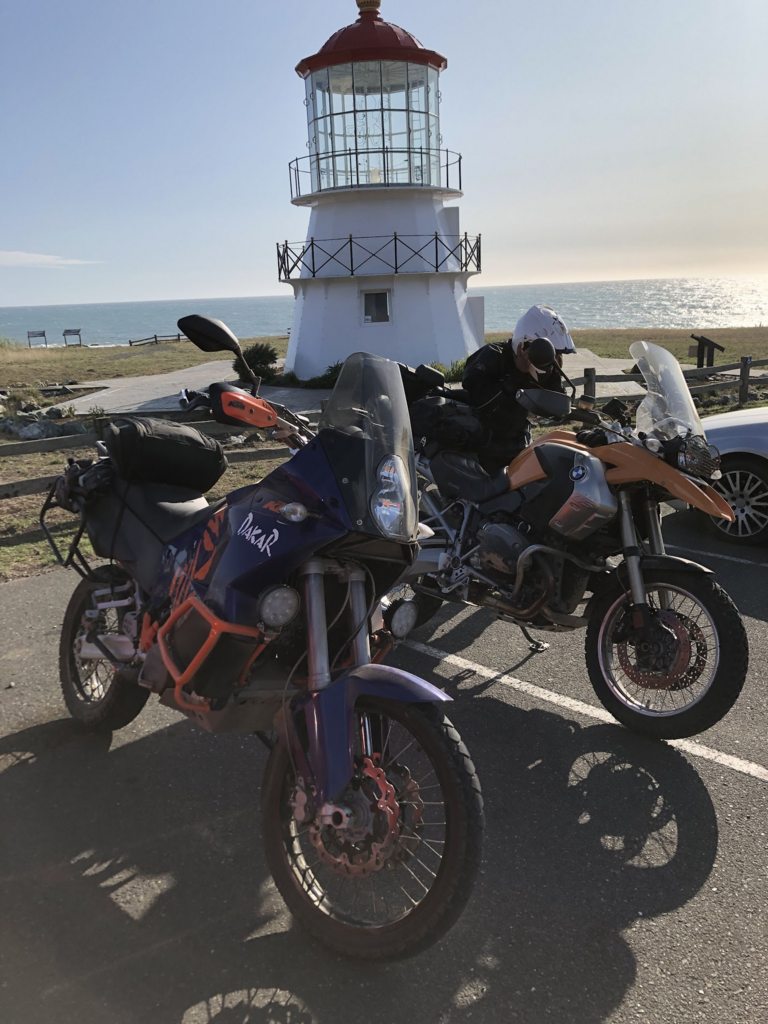 We stayed the night at the Super 8 in Fortuna, a much better room than the Motel 6 of the previous night. We drank a few beers at the Eel River Brewing Co in Fortuna where we met Eddie Benson, the owner of Fremont Honda Kawasaki. We were really tired that day and slept well at night.

Day-2 was easier in terms of dirt. We first rode through the Avenue of the Giants (see RR42) and then made our way inwards away from the coast. Day-2 was full of hard packed fire roads with little technical stuff. It made for easy riding and was a welcome break from the previous day. 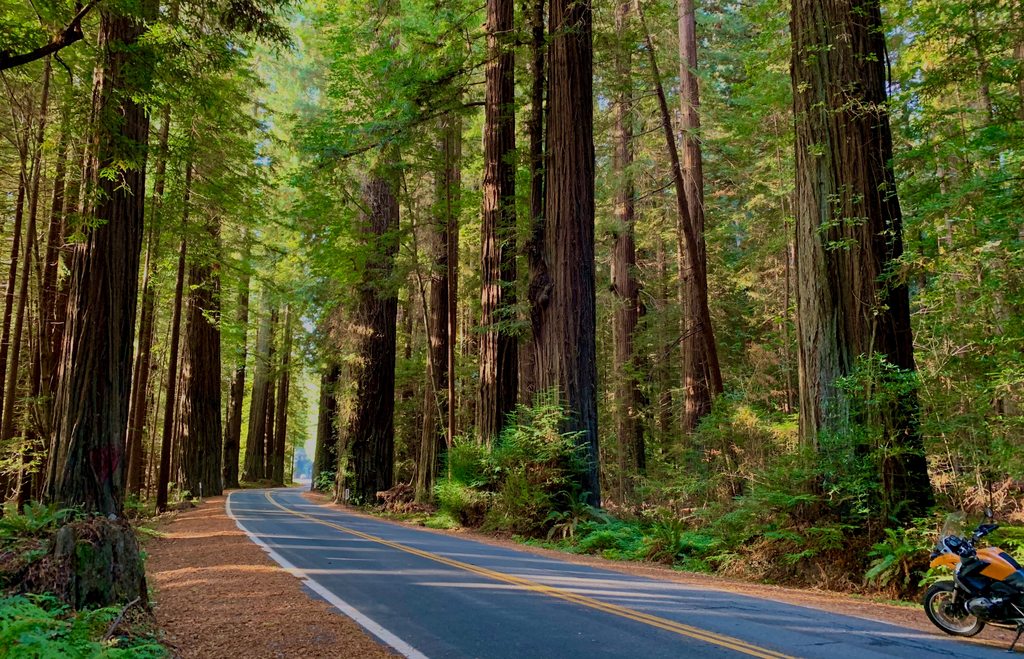 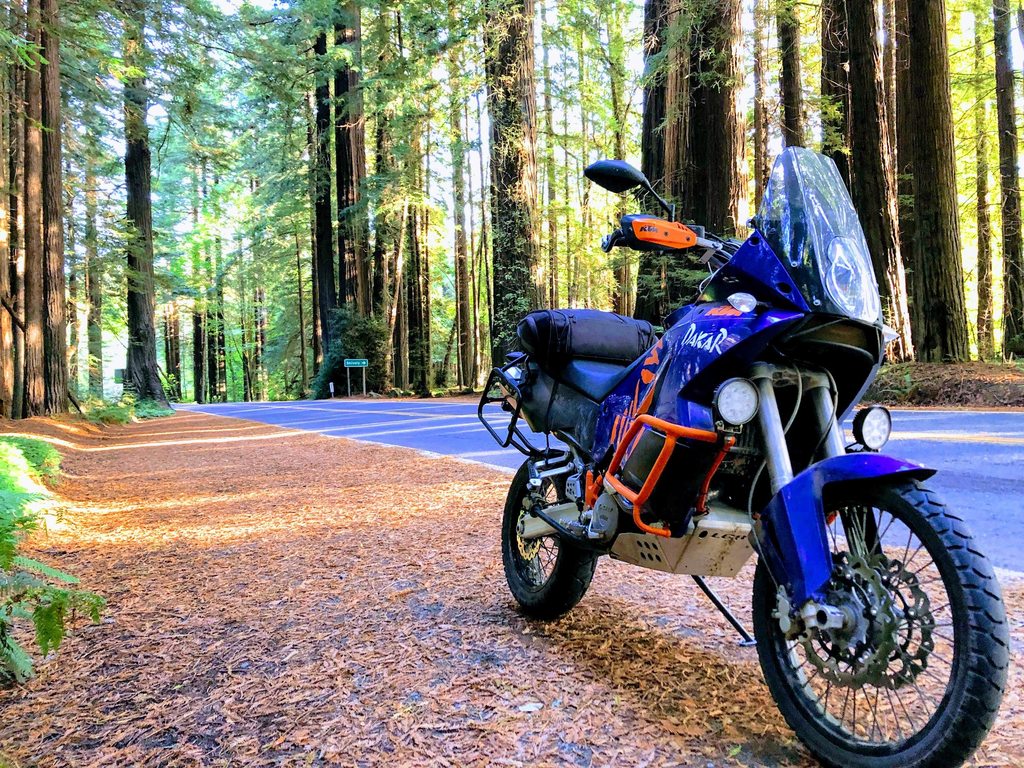 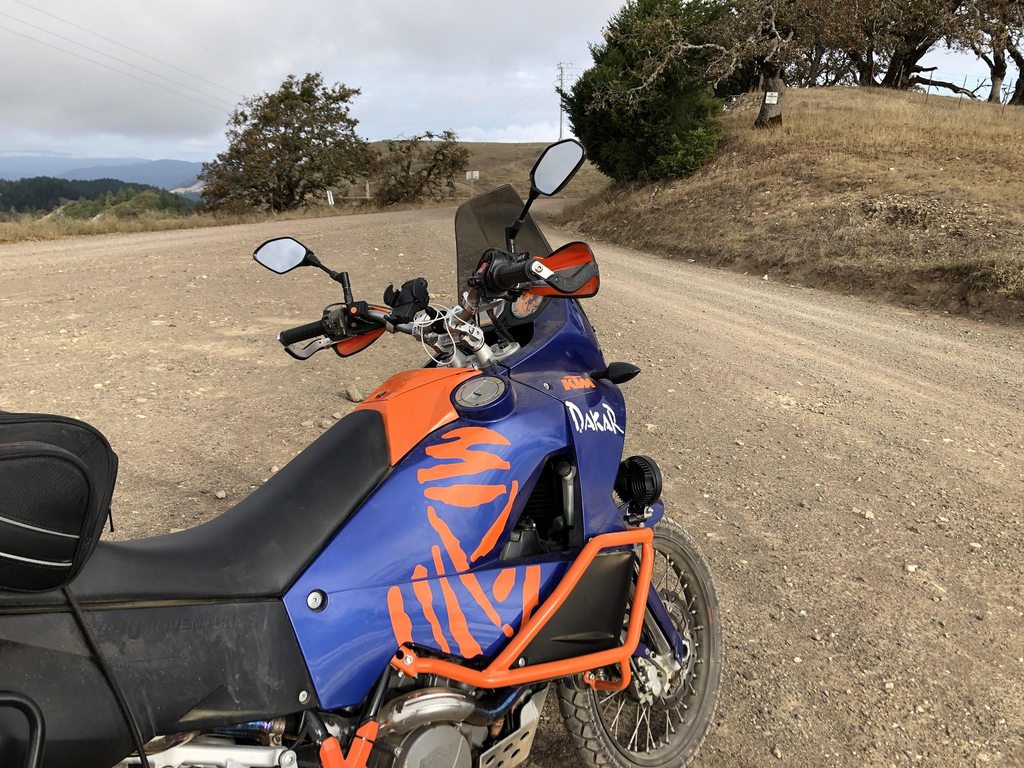 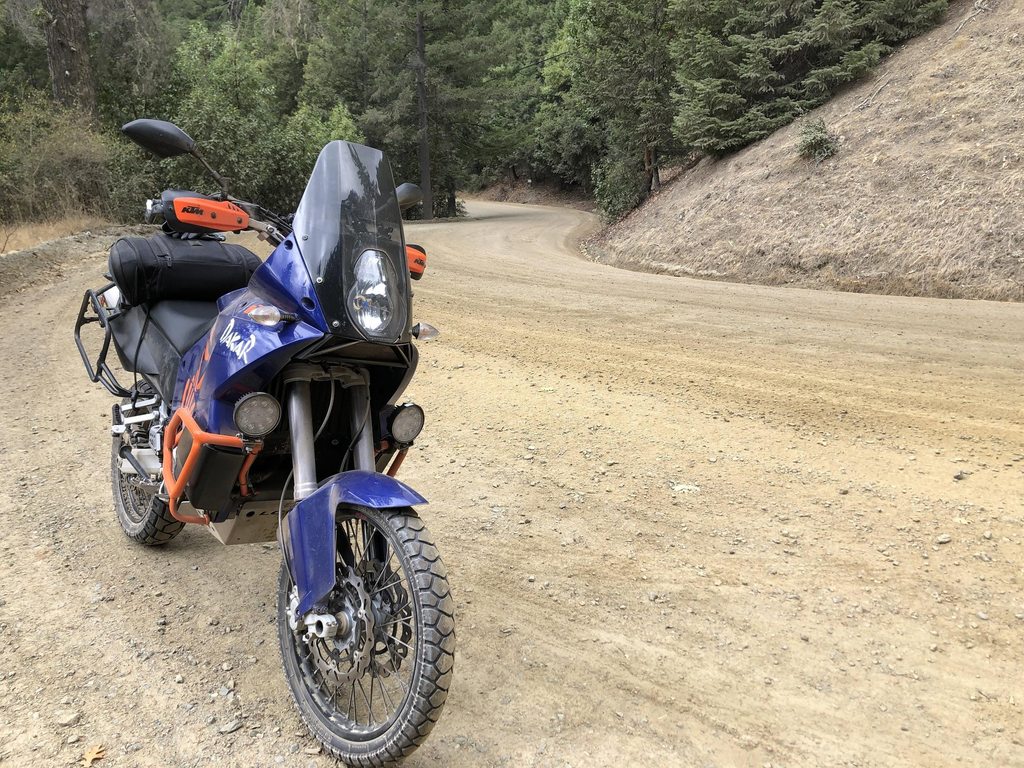 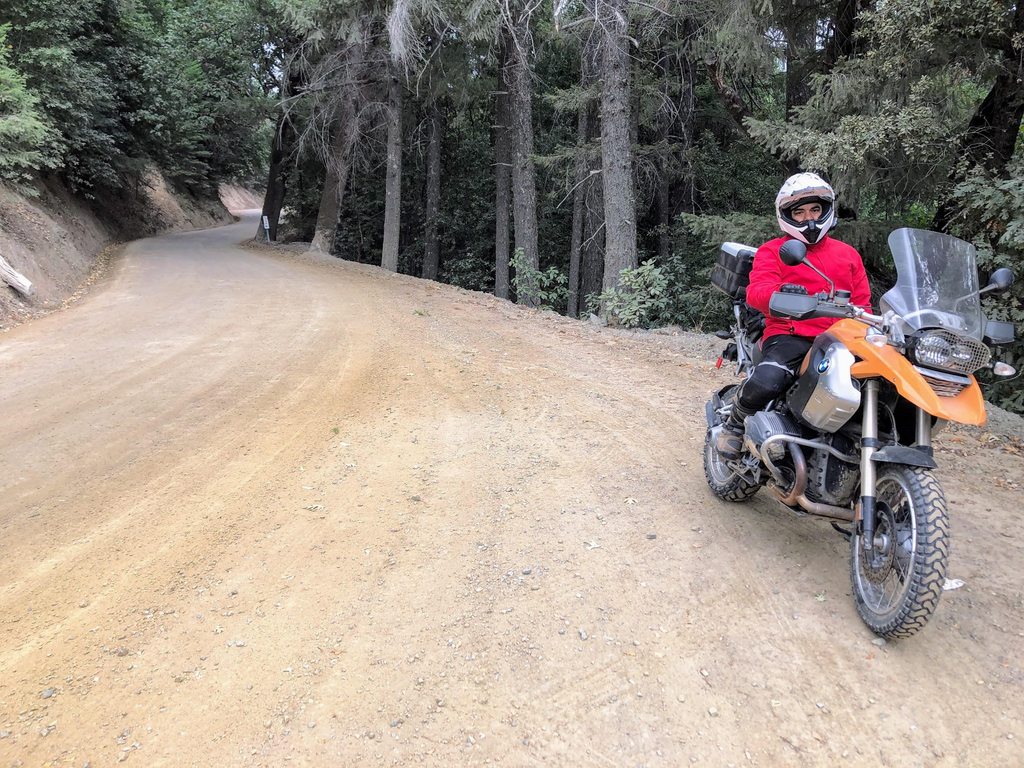 We had a quick lunch at Wheels Cafe and Pub in Laytonville, and made our way back home. We didn’t do the full route for Day 2 either – gotta keep something for next year! It was a long ride from Ukiah back home to Fremont, but the dirt sections of the day were easier and we weren’t super tired.

Here is a video I edited, turn up the volume.

Overall this was an excellent 2 day ride. A little exhausting, but “the adventure” total made up for that. Among the “big bikes” the most popular bikes there were by far KTMs, followed by Honda’s Africa Twin and the BMW GS.