Skip to content
If you’ve seen the Coen brothers 2011 epic movie True Grit, you probably remember the finale: Jeff Bridges riding through the night on a horse with Mattie, who has been bitten by a venomous snake. As the night turns to day, the horse eventually collapses from exhaustion but Bridges continues on foot, even as it starts to snow. Bridges gets Mattie to the doctor in time, and Mattie survives, although she never sees Bridges again. That was an amazing movie and somehow reminded me of this years motorcycle trip.

We started the day, early as usual, meeting in the Niles area of Fremont. Shobhit flew in from Seattle the night before and he rode Akshay’s BMW S1000R, while Akshay rode his new Aprilia Tuono. I was riding my Suzuki Hayabusa with a simple tail bag at the back, enough to carry stuff for 3 days. After a very wet 2018-2019 winter, it had not rained for the entire months of April and May, but right around the time of this trip, the weather changed and a lot of rain was forecasted.
[Pic by Ayon] 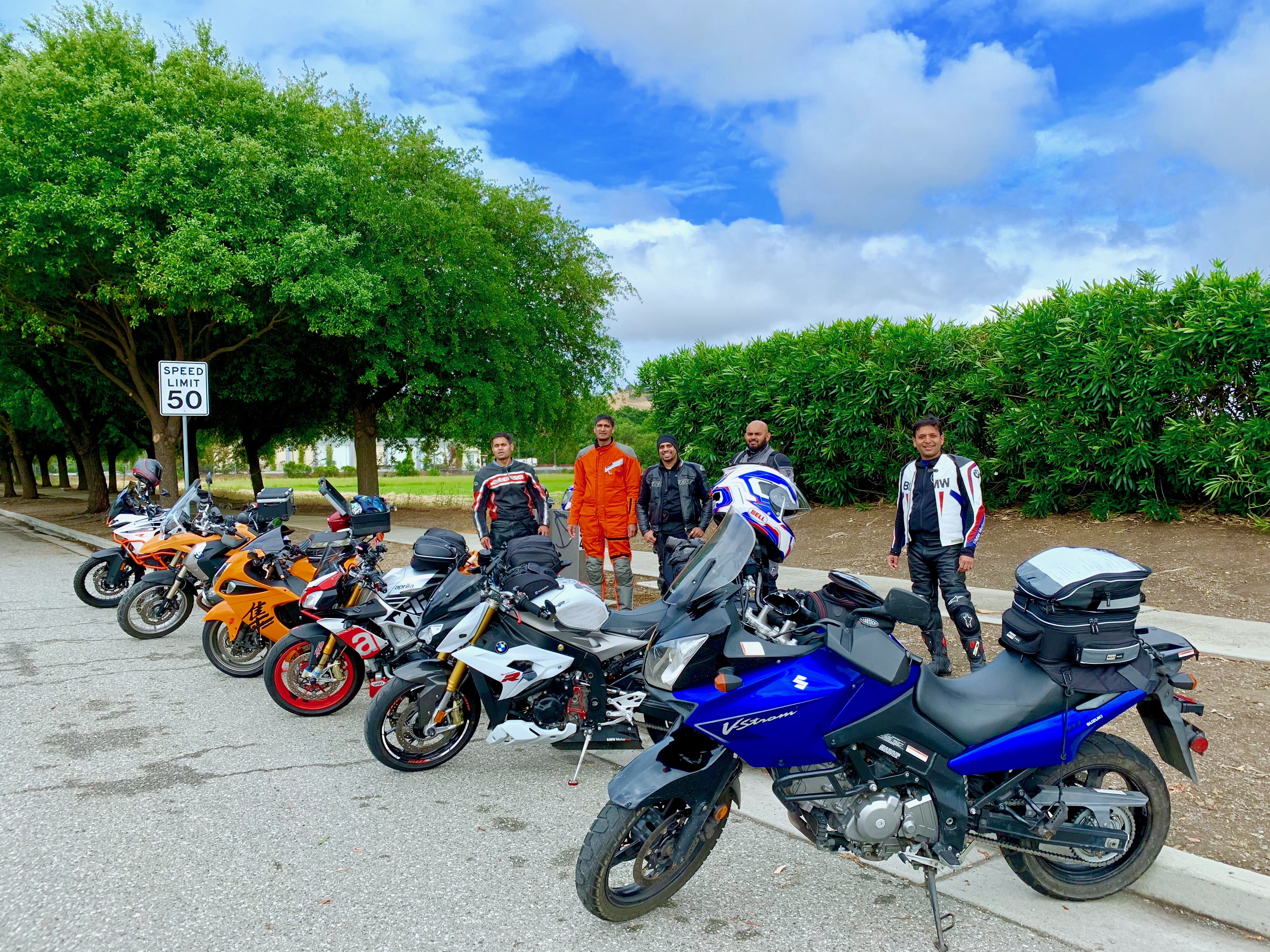 As we started off from Niles, it was raining lightly and we took the freeway down to San Jose where we met the rest of the group. Anil (Suzuki VStrom 650), Ayon (BMW R1200GS) and Sravan (KTM 1090 Adventure) were the new riders for this year. Ayon is a pro photographer and many of the beautiful pics below were shot by him. After a few pictures we started down Uvas Road, road over Hecker Pass and then to the coastal Hwy 1. After a short burst of fun on Laureles Grade, we made it to our first gas stop in Carmel Valley. Sravan and Ayon ate some breakfast, while the rest of us chatted. We then rode Carmel Valley Road (without getting lost this time) and it had stopped raining by then so I enjoyed the Busa on the twisty parts of CVR.
[Pic by Ayon] 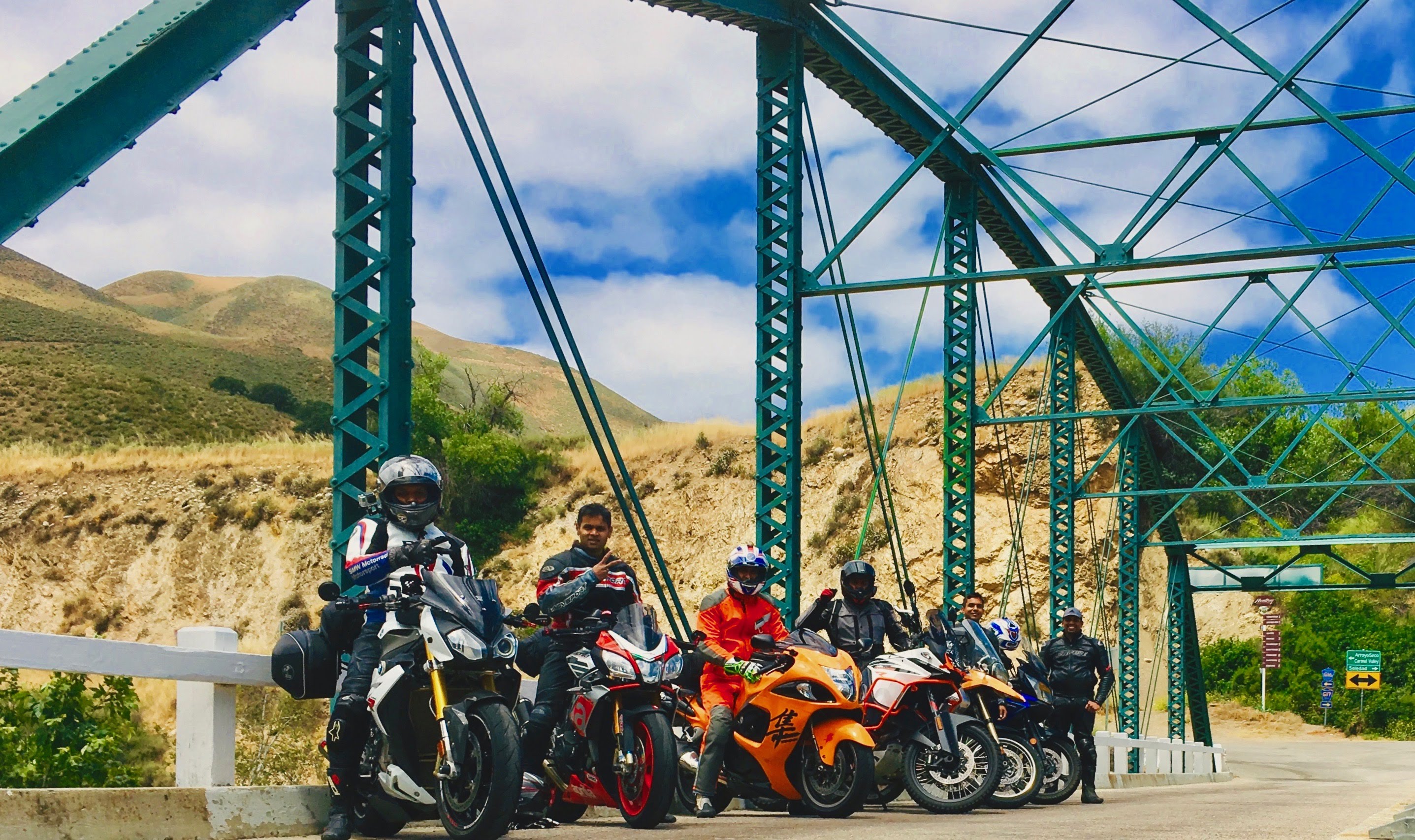 We stopped for pictures on the green bridge over the Arroyo Seco river. We parked all 6 bikes on the bridge mid-span, so we probably irked the dozen or so cars that went by. We then rode down to King City for lunch, where we ate at El Lugarcito Restaurant. The burrito was decent, but the beer was good! 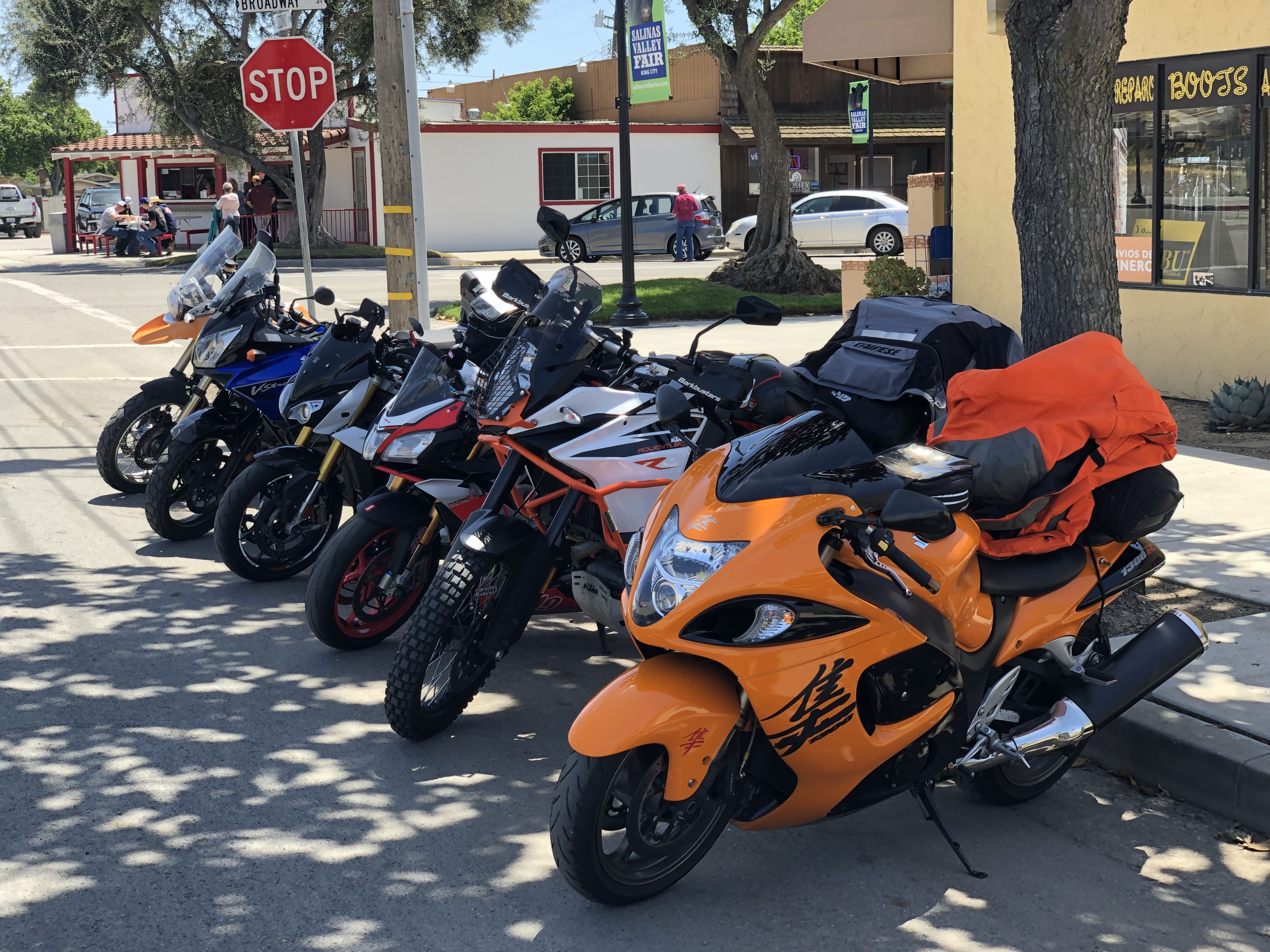 I got onto Sravan’s KTM as we started down Jolon Road. The KTM surprised me with how easy it was to ride, and how comfortable it felt. The engine was great, full of torque at the low end and it was easy to ride into the triple digits. Riding Jolon was excellent, bright skies, mild temps and not much traffic. We switched bikes and then rode down Interlake Rd, Nacimiento Lake Dr and Godfrey Rd till we reached Chimney Rock Rd. 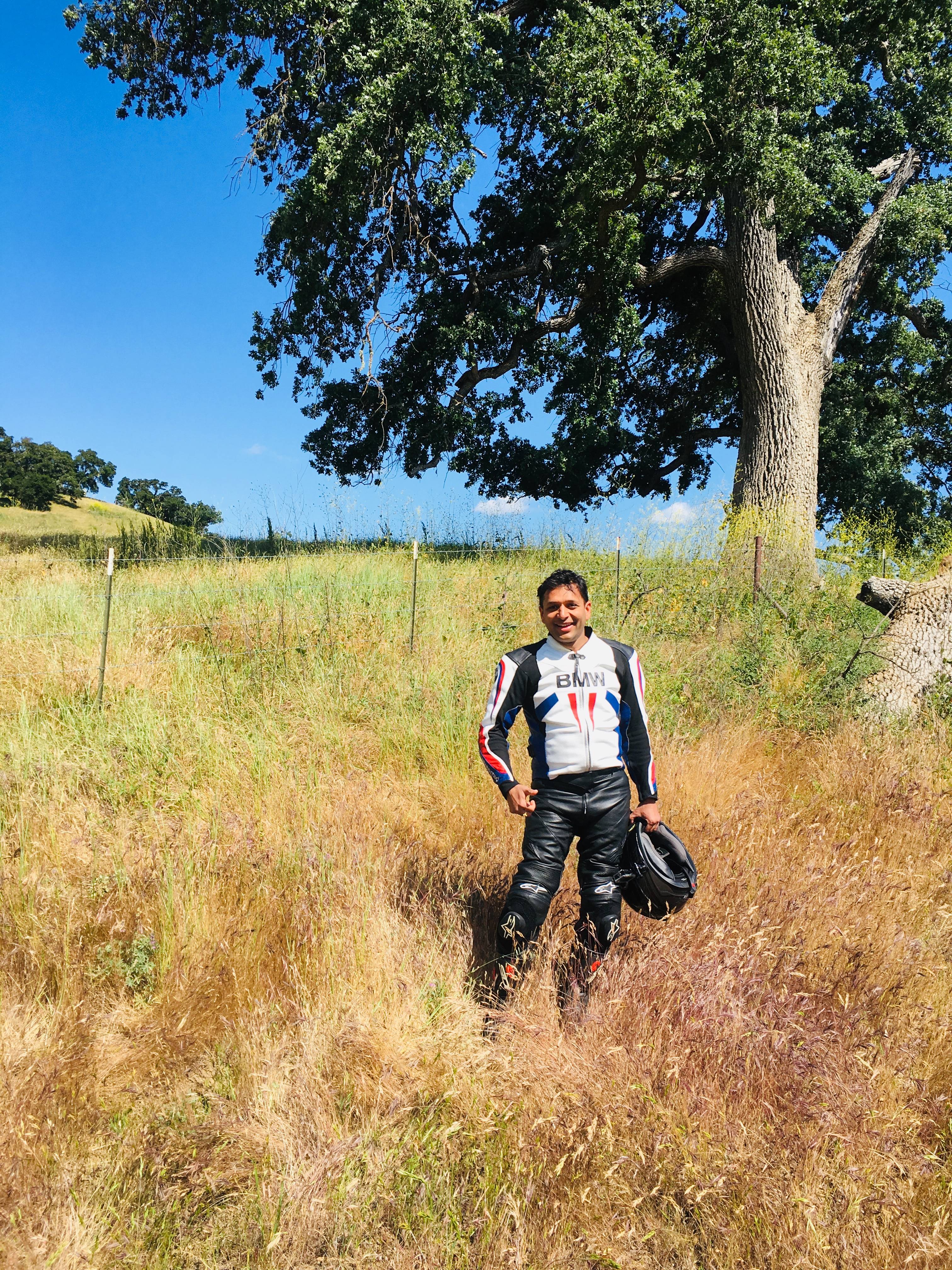 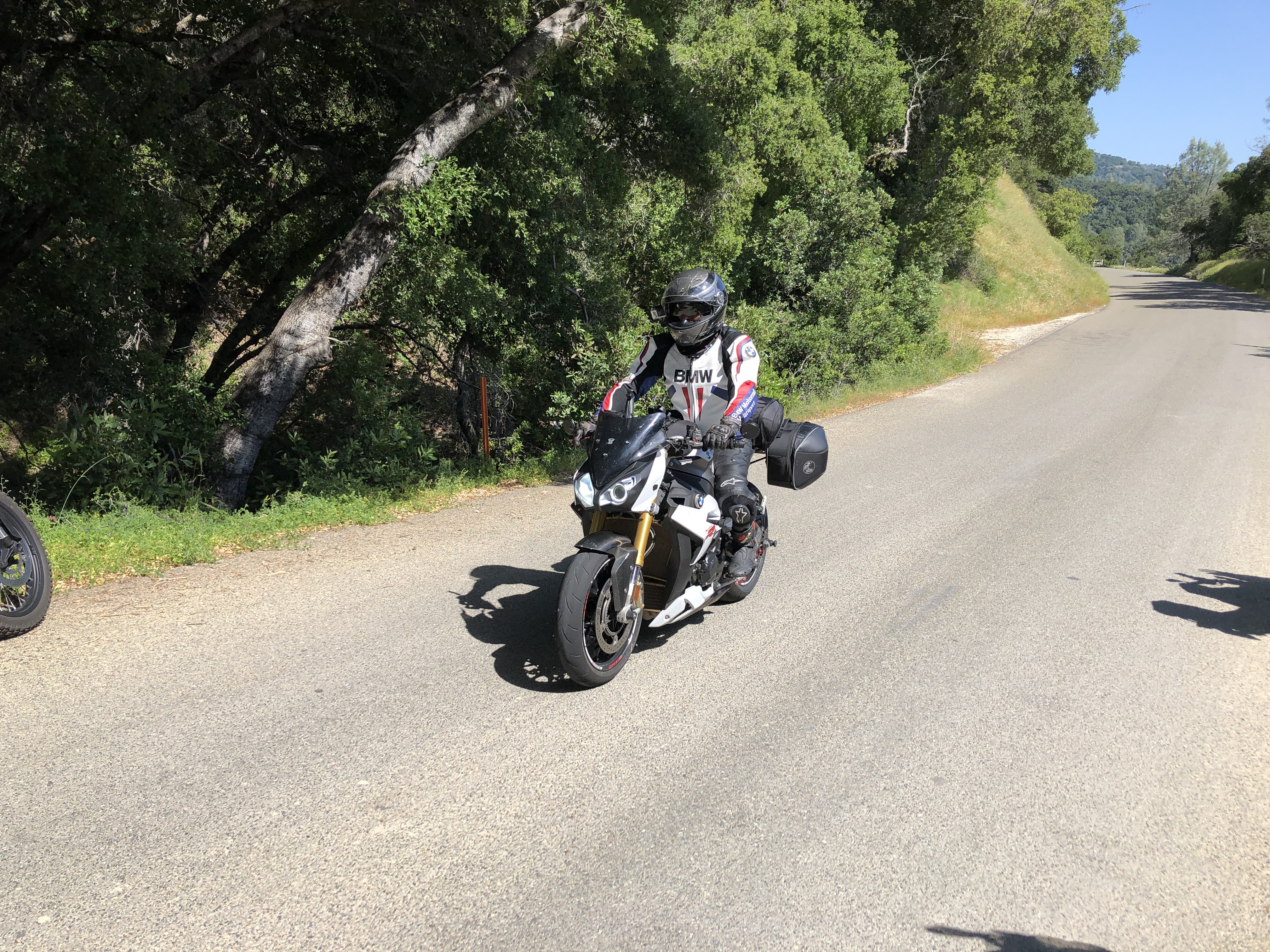 As we rode to the end of Chimney Rock, we stopped by the spot that Shobhit crashed last year and took a few pics. It was a great reminder to slow down and enjoy the road. We stopped for a short break at the end of Chimney Rock and turned right on to Adelaida Rd as we returned. We then road Vineyard Dr and Peachy Canyon Rd back towards Paso Robles. Peachy Canyon was probably my favorite road of the day – nice tight twisties and very little traffic. I was following Anil and a good clip, not too fast, not too slow, just right for the most amount of fun. 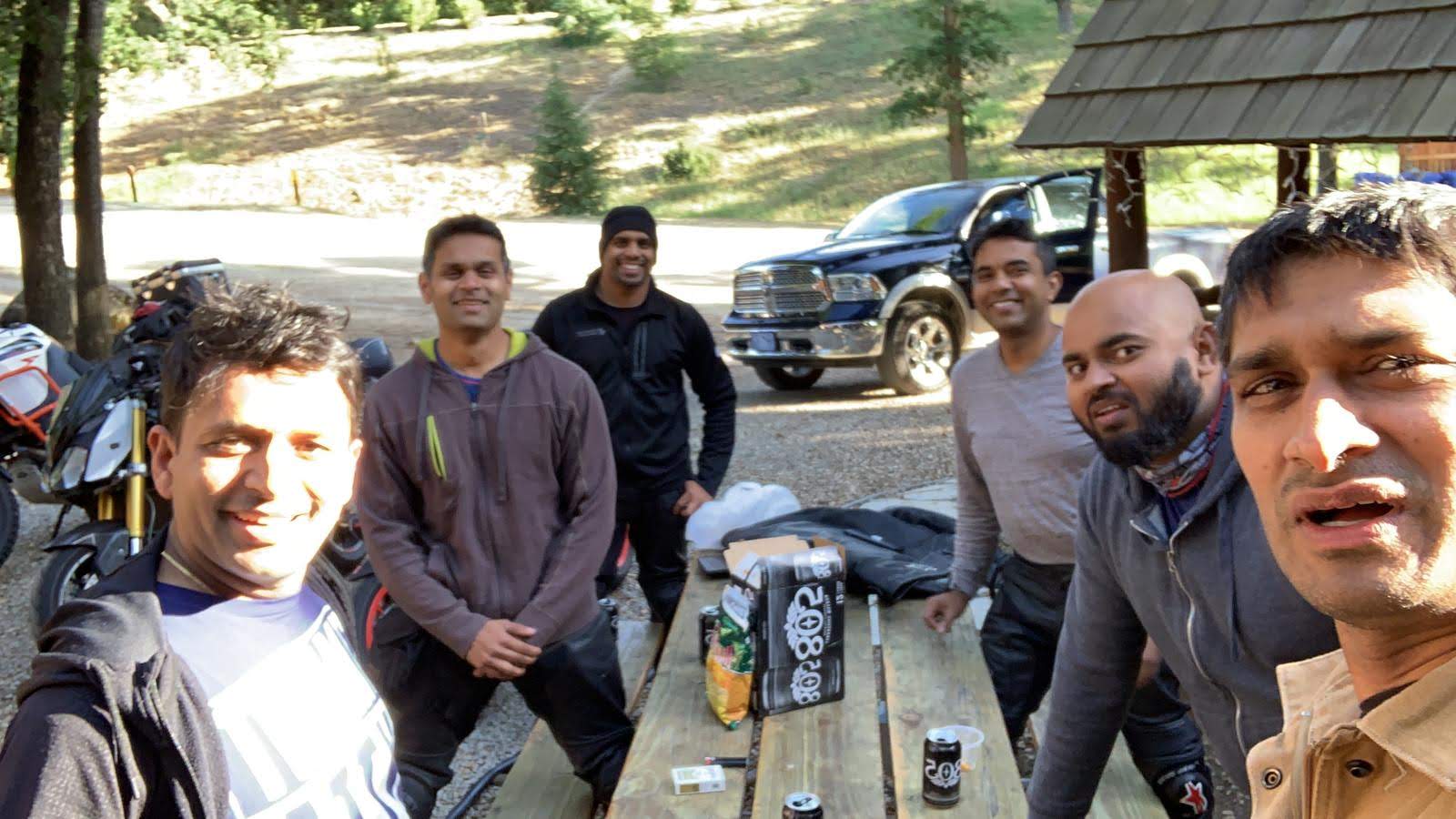 By the time we go to Paso Robles, it was getting to the end of the day by now, and we were all a bit tired. I did want to ride Hwy 229, Rossi’s driveway, but I didn’t feel like making the extra 20 mile detour. That road will have to wait for another time. It always seems like by the time we get down there, we are ready to call it a day and we don’t end up riding that road. Anyway, we then rode down to the KOA at Santa Margarita Lake where we camped for the night. The last few miles to the campground were fun. A completely open road with very wide turns, I opened up the Busa to about 150 and stayed there for more than a couple of seconds. It was fun. Sravan and Anil were kind enough to go back into town and get everyone dinner, again Mexican gurb from a Taco truck in town. We got a small campfire going and there was a lot of beer and whiskey flowing, among other things.
[Pic by Ayon] 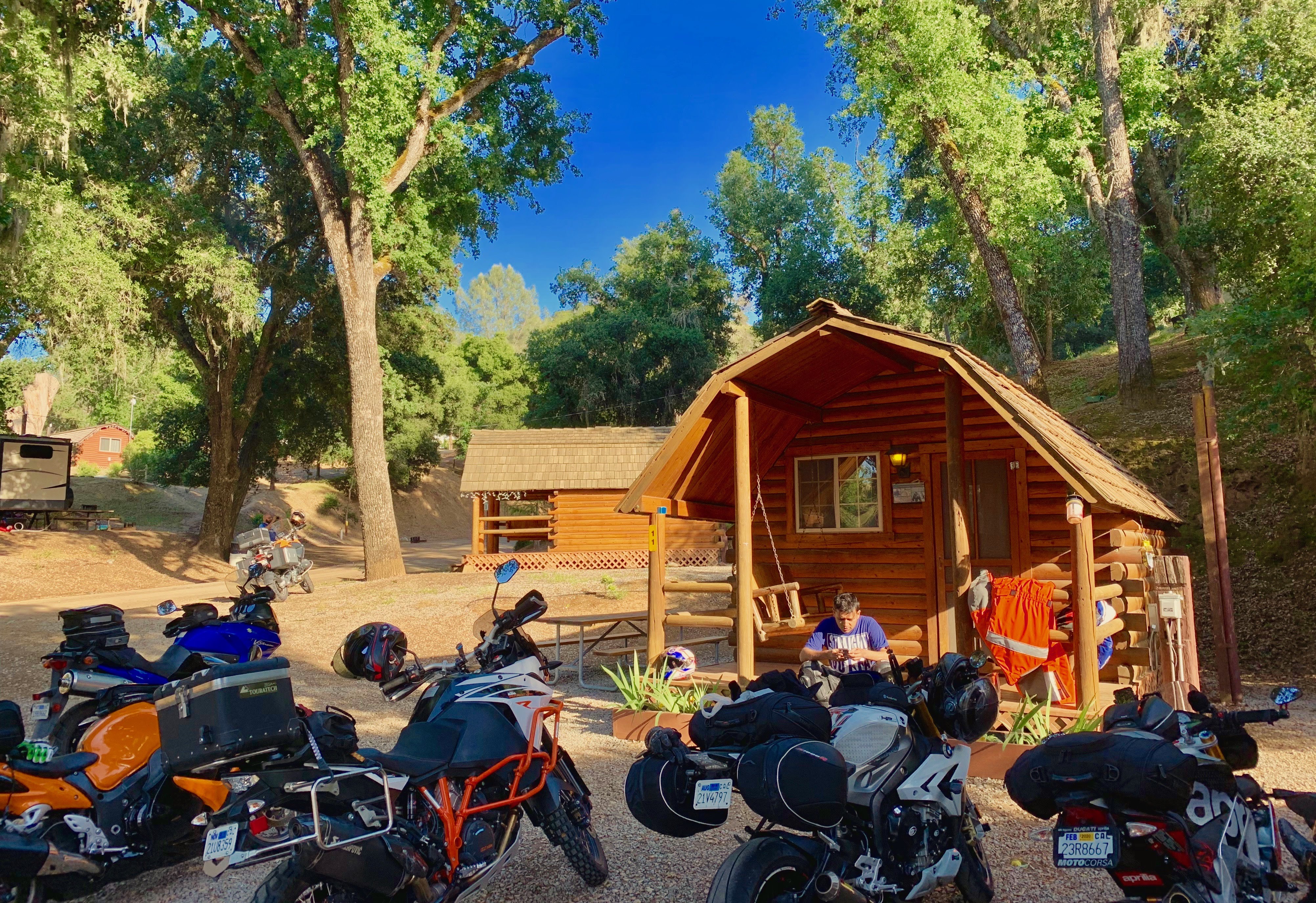 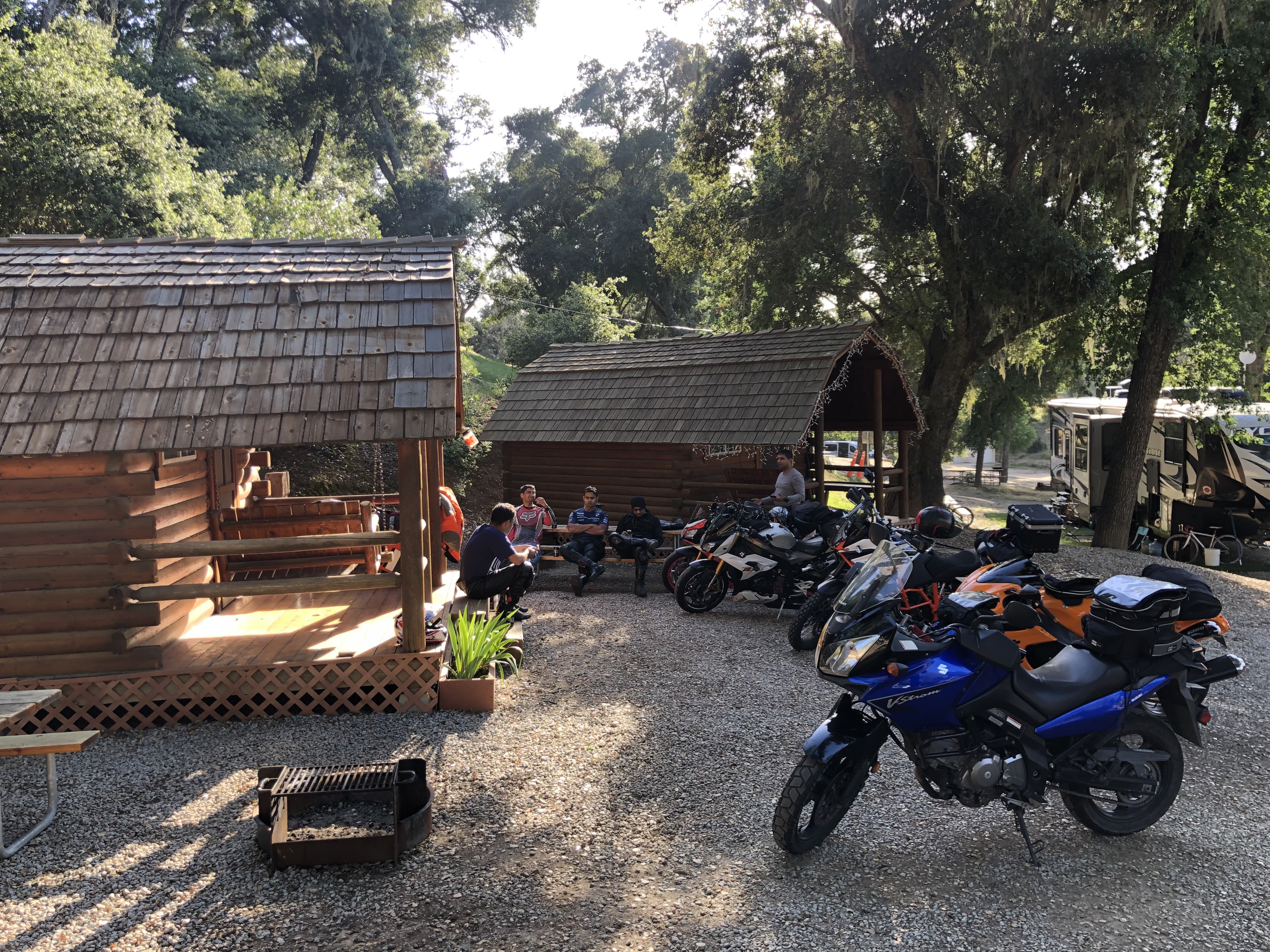 We rose pretty early the next day and packed up our luggage and left. There is a small gas station at Santa Margarita Lake, but it sold 87 gas only, and that was not suitable for the Aprilia or BMW, so we rode back up in Paso to gas up.
Next up was Hwy 58 from Santa Margarita to McKittrick. This 75 mile stretch of road is superbly entertaining. The road offers a lot of variety – wide sweepers and tight downhill twisties initially, flat straight endless roads up ahead and finally a long winding downhill section of mountain road towards the end. The pavement was freshly tarred in many places and there was very little traffic. We enjoyed the road thoroughly and stopped at a vista point for a few pictures. 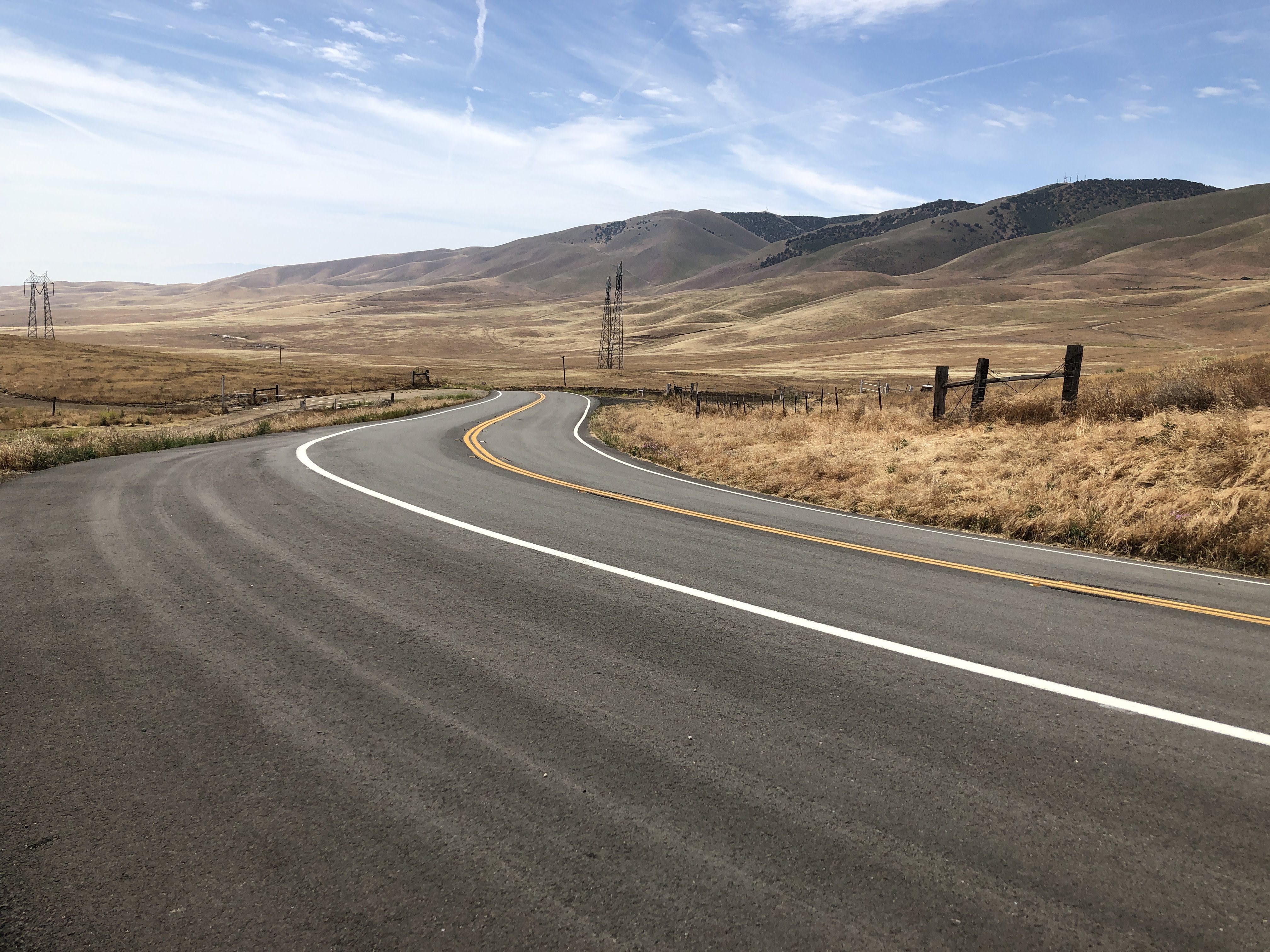 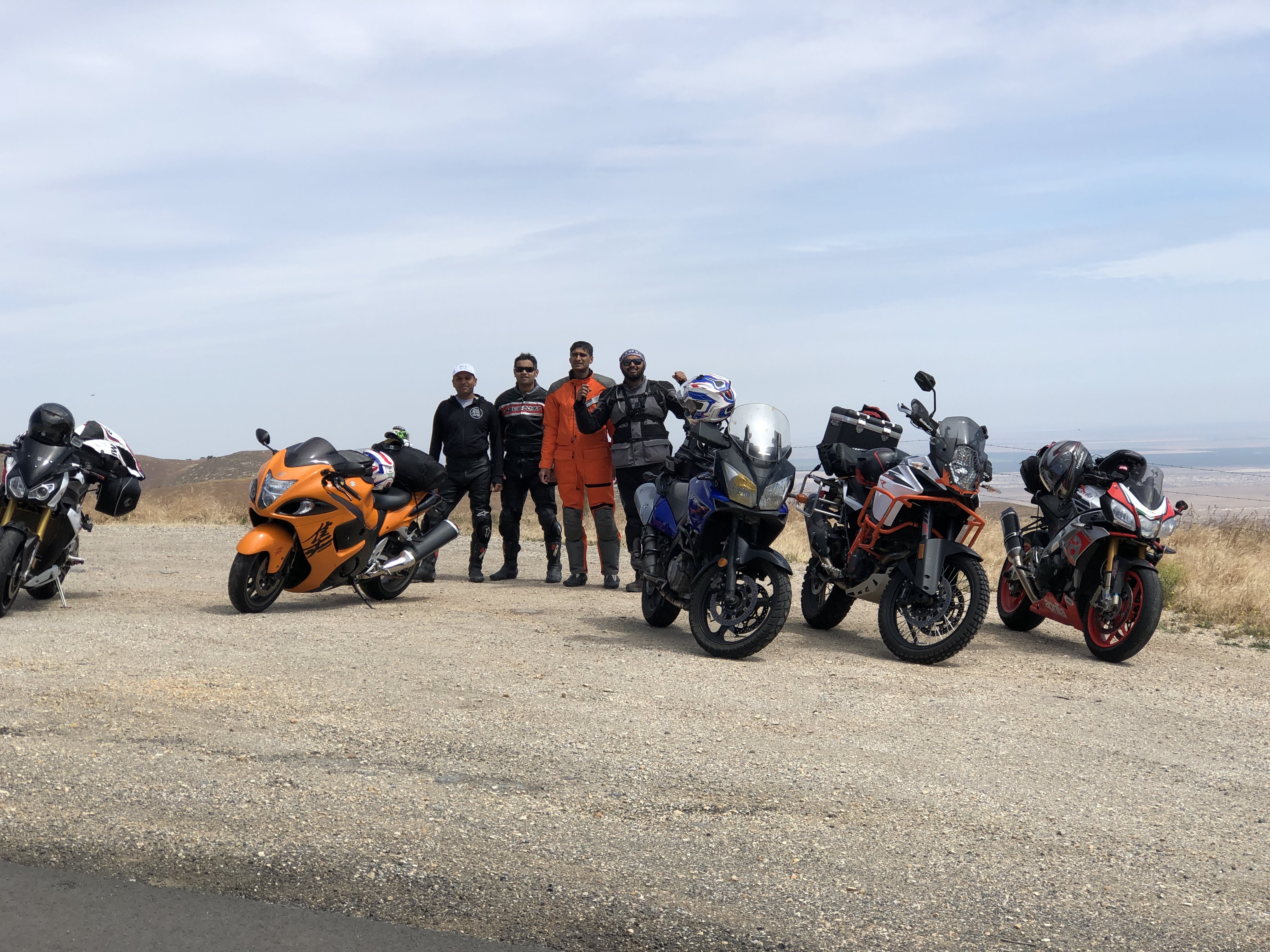 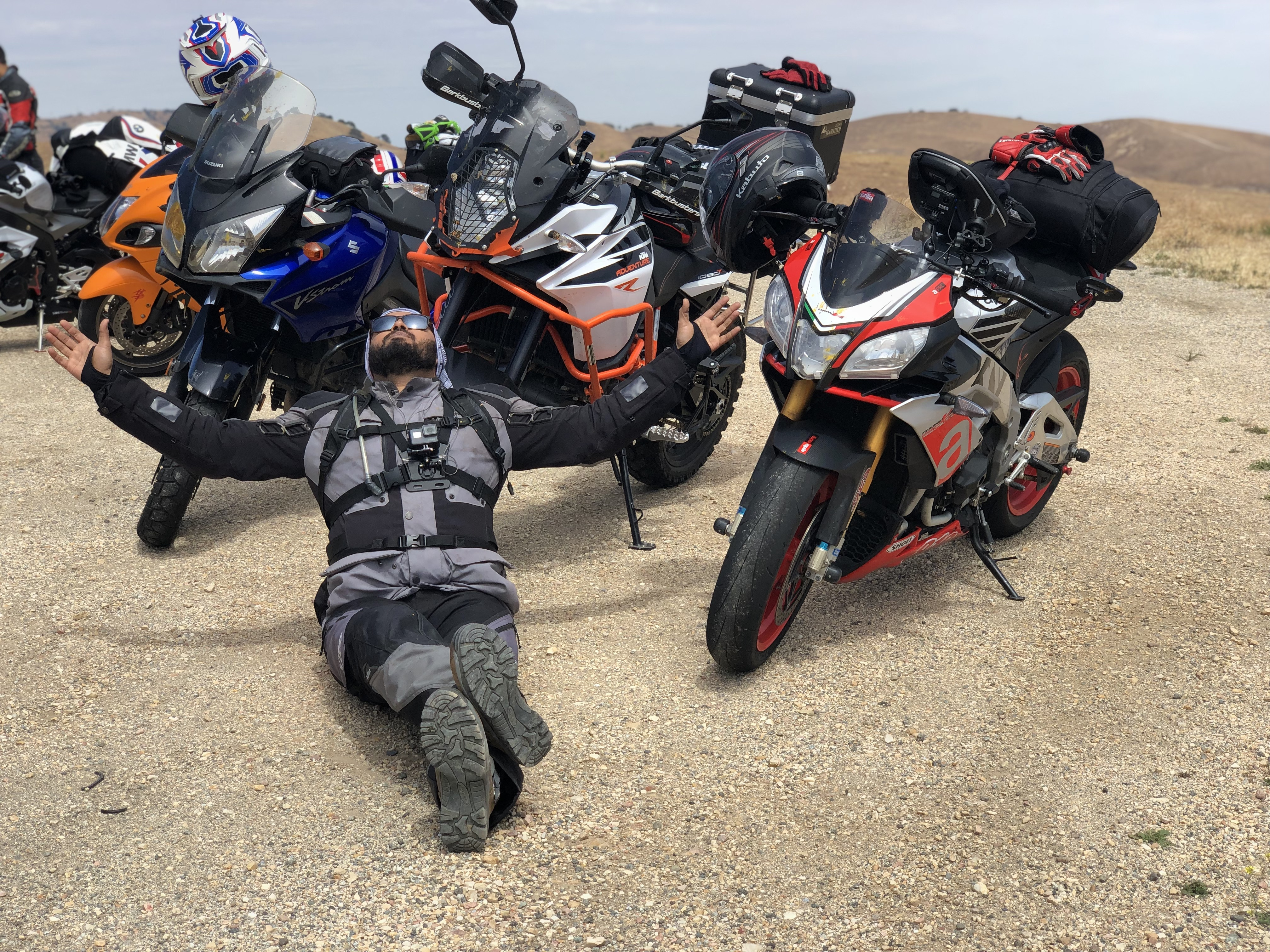 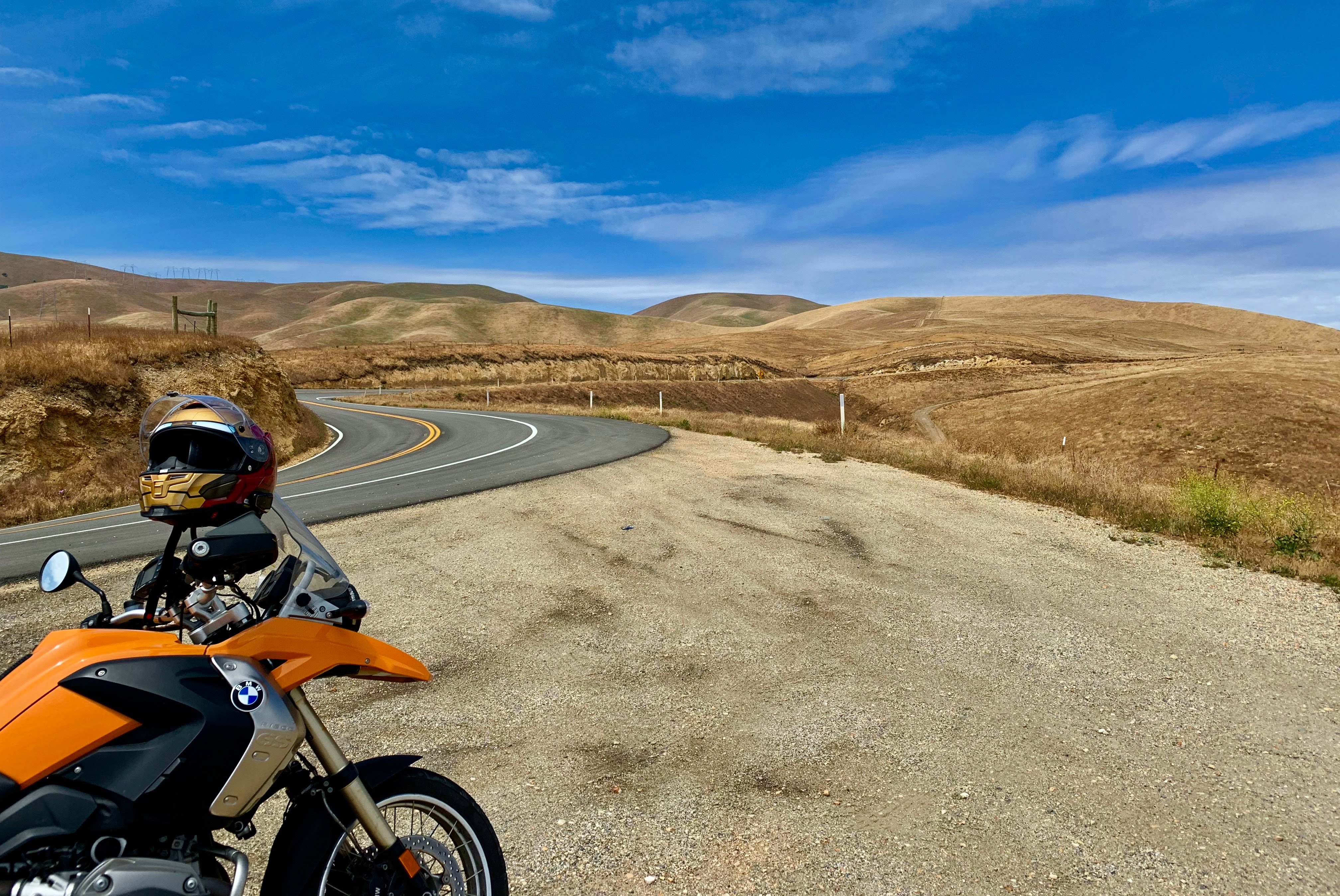 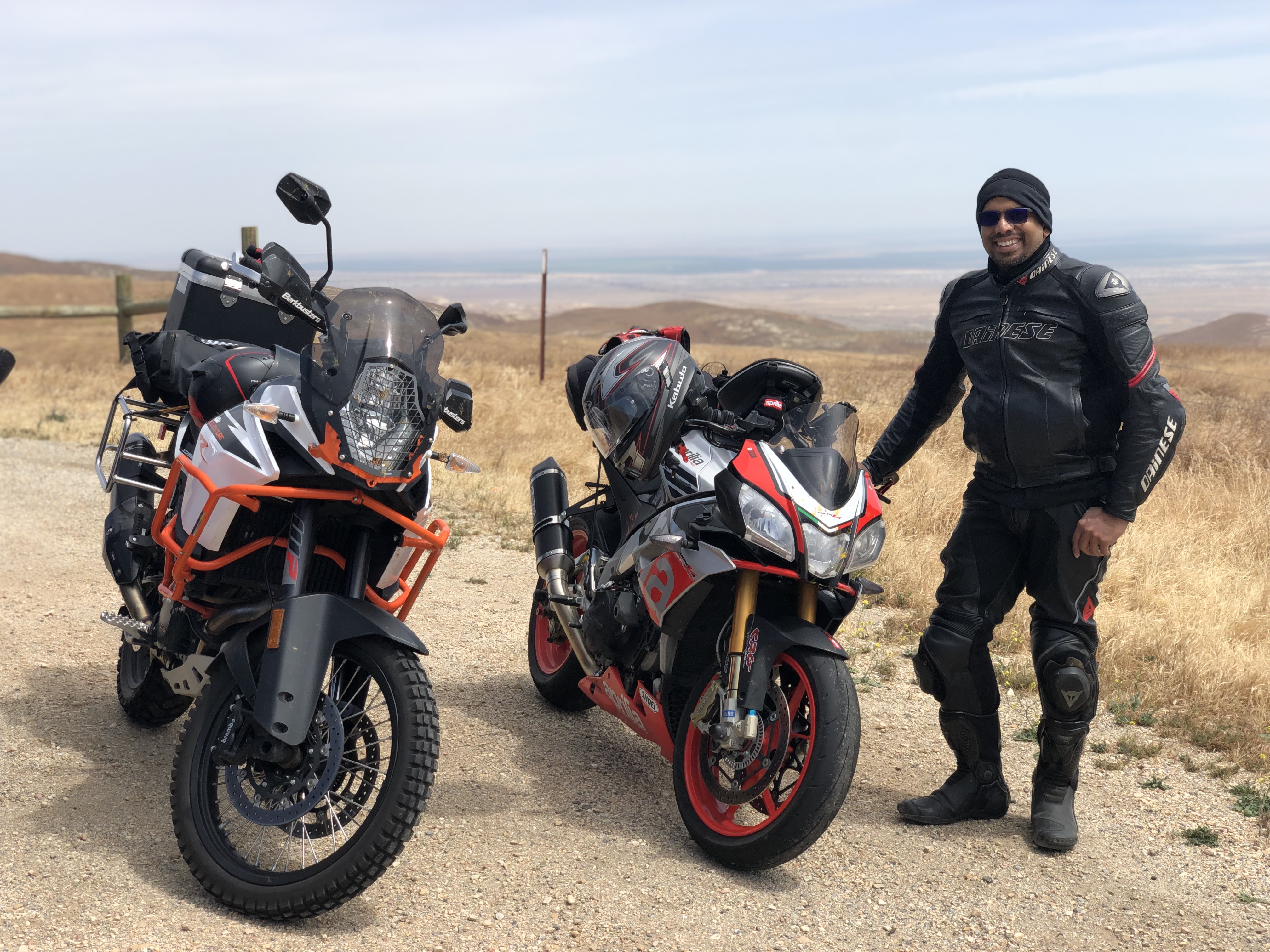 Just a few miles away we stopped for lunch at the McKittrick Hotel Penny Bar and Cafe . I was expecting a quaint, middle of nowhere roadhouse bar, but it was a pretty crummy. We ordered omlettes & beers, but the food was pretty bad. We pressed on – through the boring stretch of the central valley – to Bakersfield, where we stopped for gas and coffee. It was getting late in the afternoon and we had a lot of riding left for the day. I was planning out alternate routes in my mind, but nothing would prepare me for what would come eventually.
[Pic by Ayon] 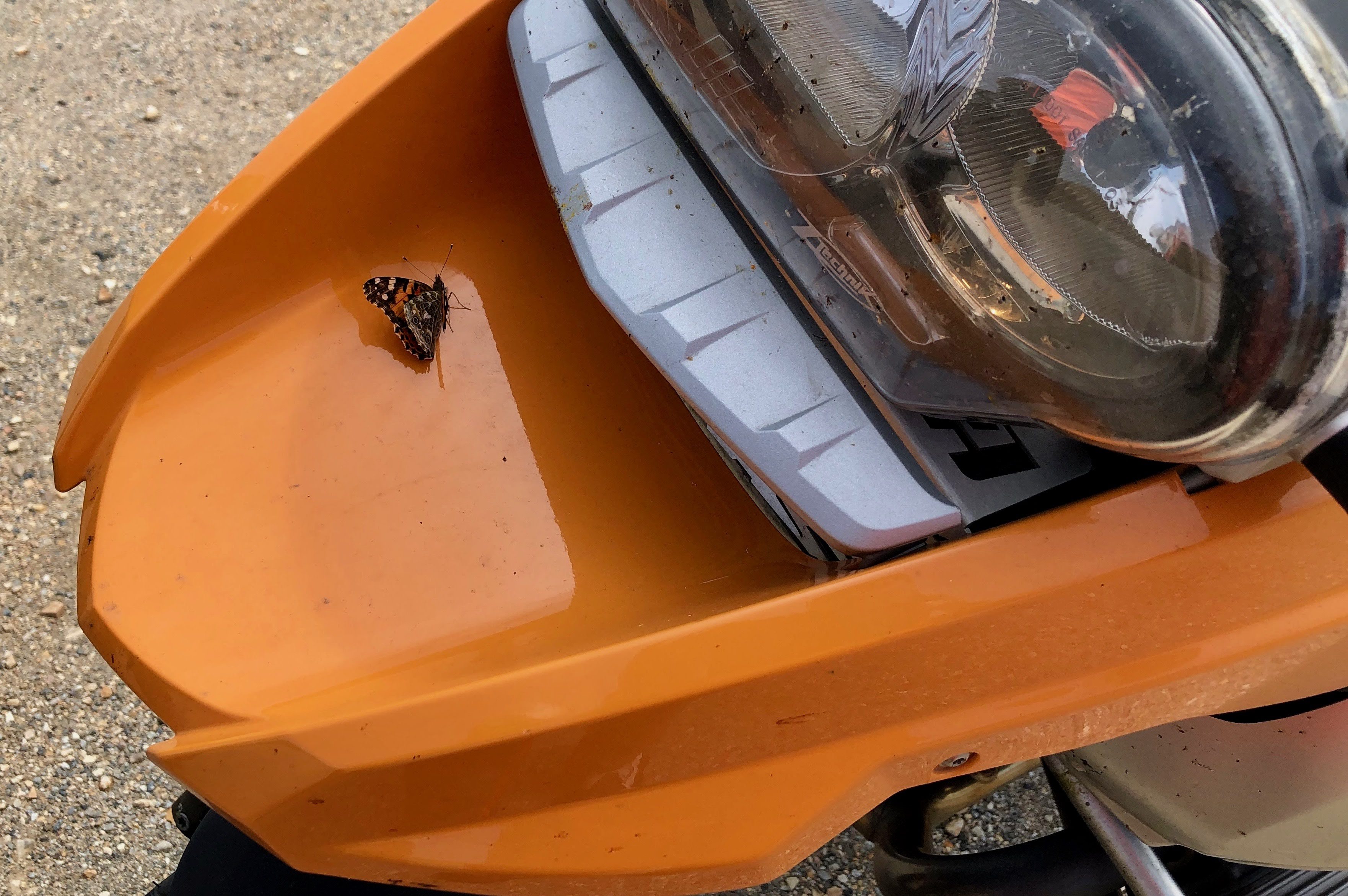 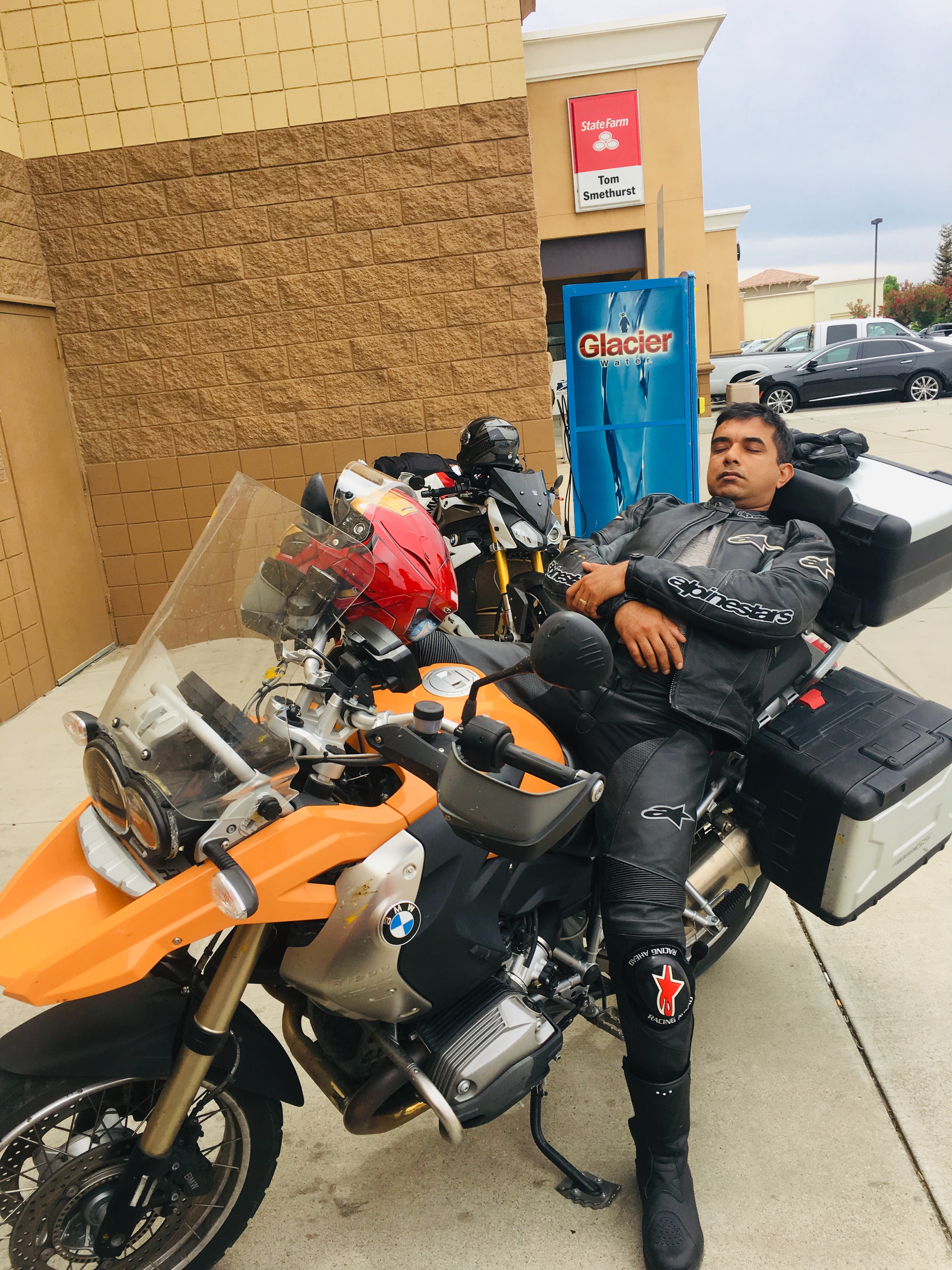 We took Hwy 178 out of Bakersfield towards Lake Isabella. This is a very scenic highway, it runs alongside the Kern river and after the very wet winter of 2018 the river was cascading down in full glory. The rapids were gorgeous and Ayon stopped to take a few pictures. The road was also very entertaining, but traffic was a little on the heavy side. 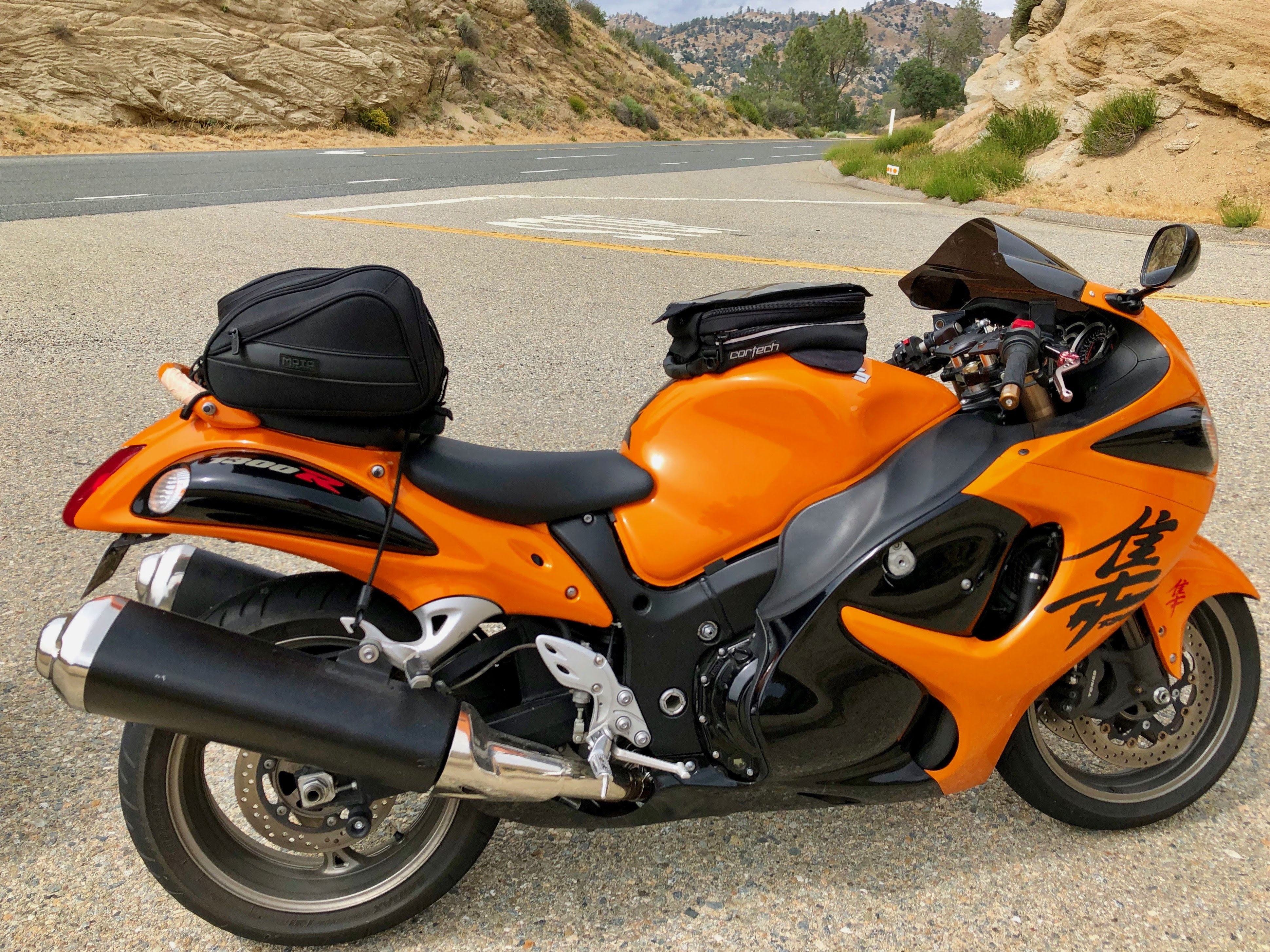 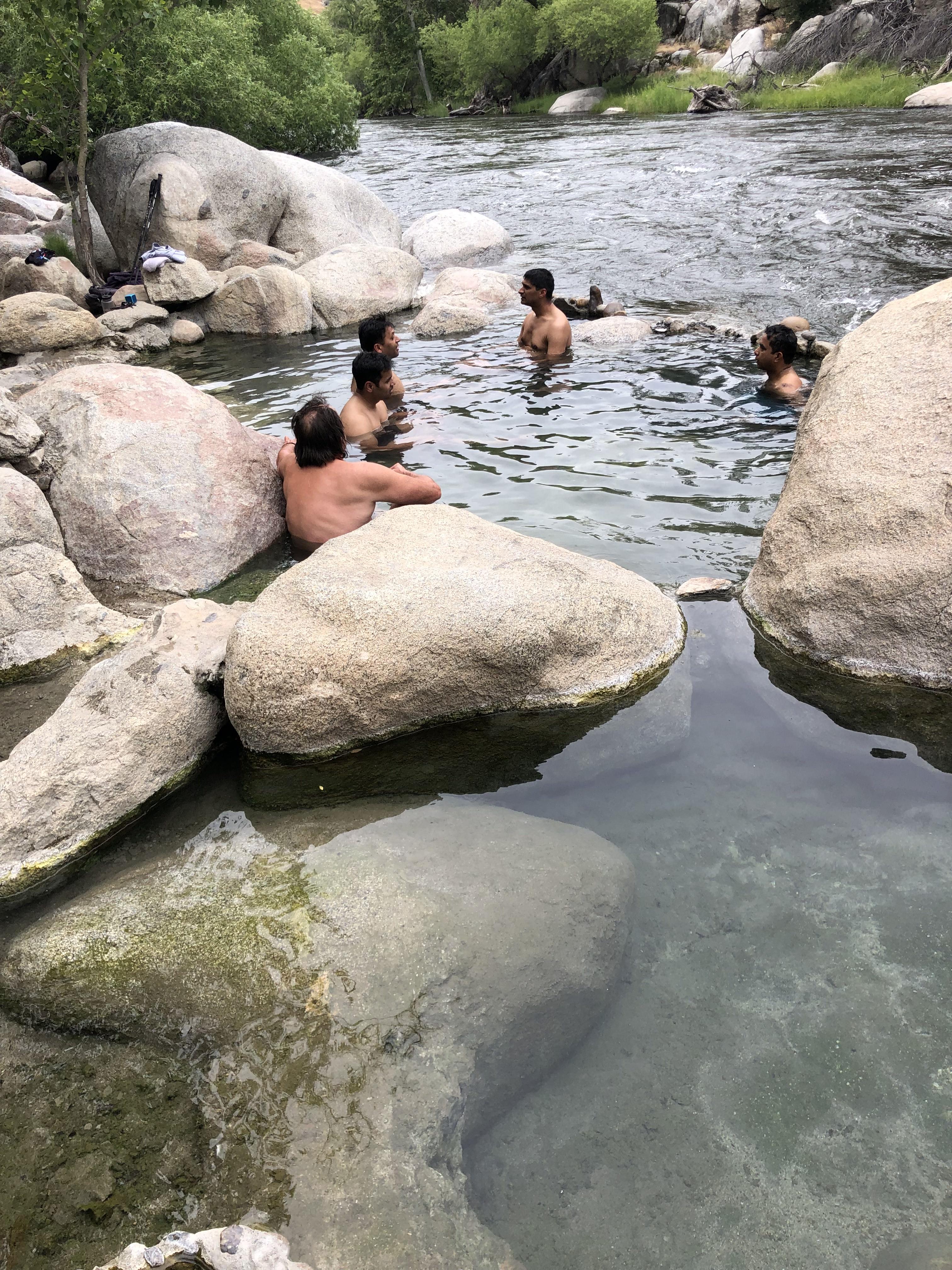 We took a short detour to Miracle Hot Springs off Hwy 178. In keeping with tradition, the dip in the hot, really hot, springs was a welcome break. A short hike from Hobo Campground the area offer three small soaking tubs: mild medium and hot! While the hot tub was really hot, most of us got comfortable in the medium pool. It was also the one right next to the flowing river. So we all took turns alternating between the cold water of the Kern river and the warm water of the hot spring. All in all, it was a great rejuvenating experience. As we started to gear up, we could see storm clouds gathering. 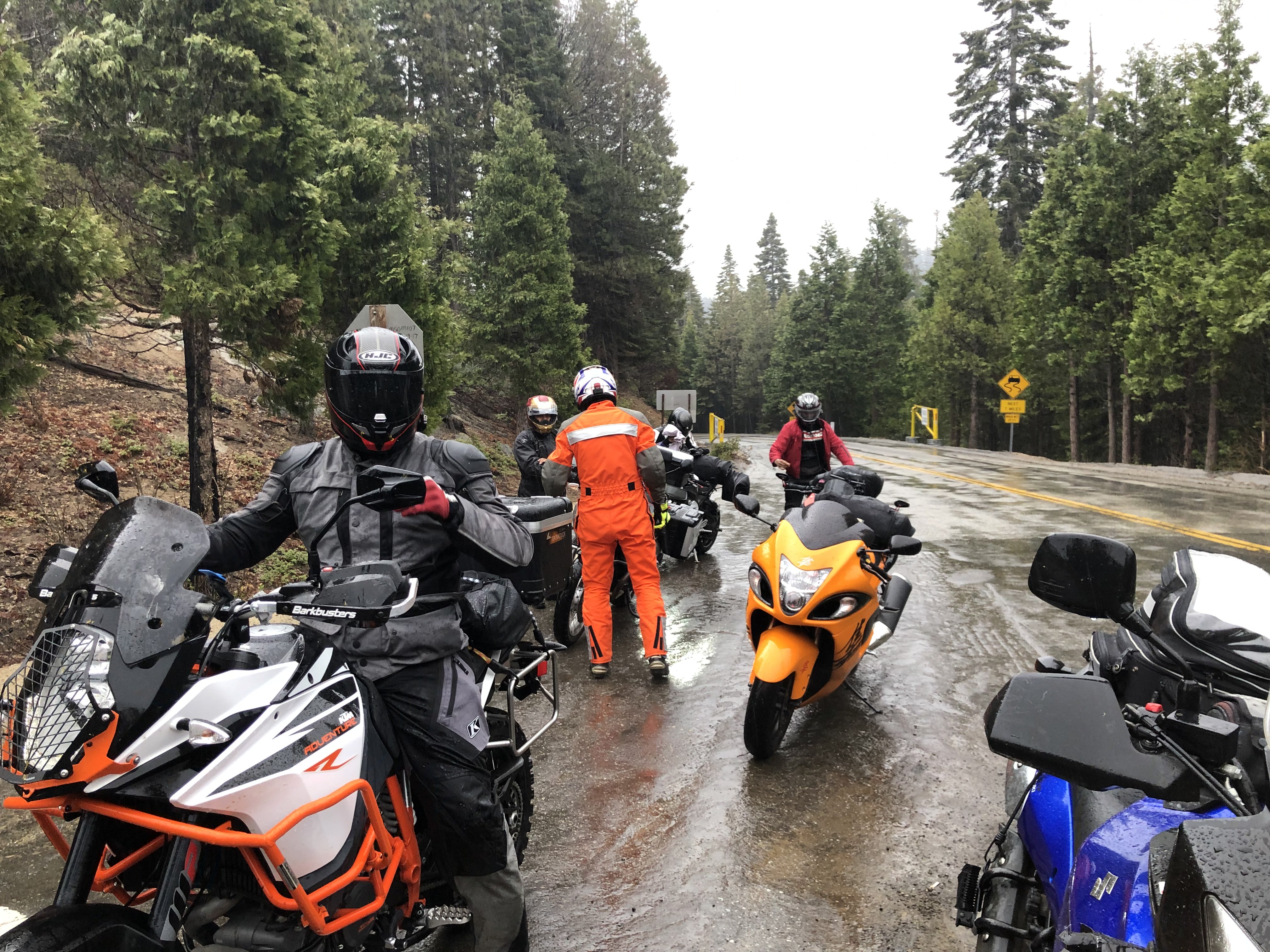 In spite of the clouds and light rain at that point, we decided to continue along the planned route. We passed through Kernville and took Mountain Hwy 99 north towards Sherman Pass. With all the snow from the winter, the road to Sherman Pass was closed, not at the Junction to Mnt Hwy 99, but a few miles in. So we continued on, towards the junction of M50 and Hwy 99. It had started to rain moderately by then. It all took a pee break and warmed our cold hands on the giant Busa muffler. The stock mufflers came in handy! 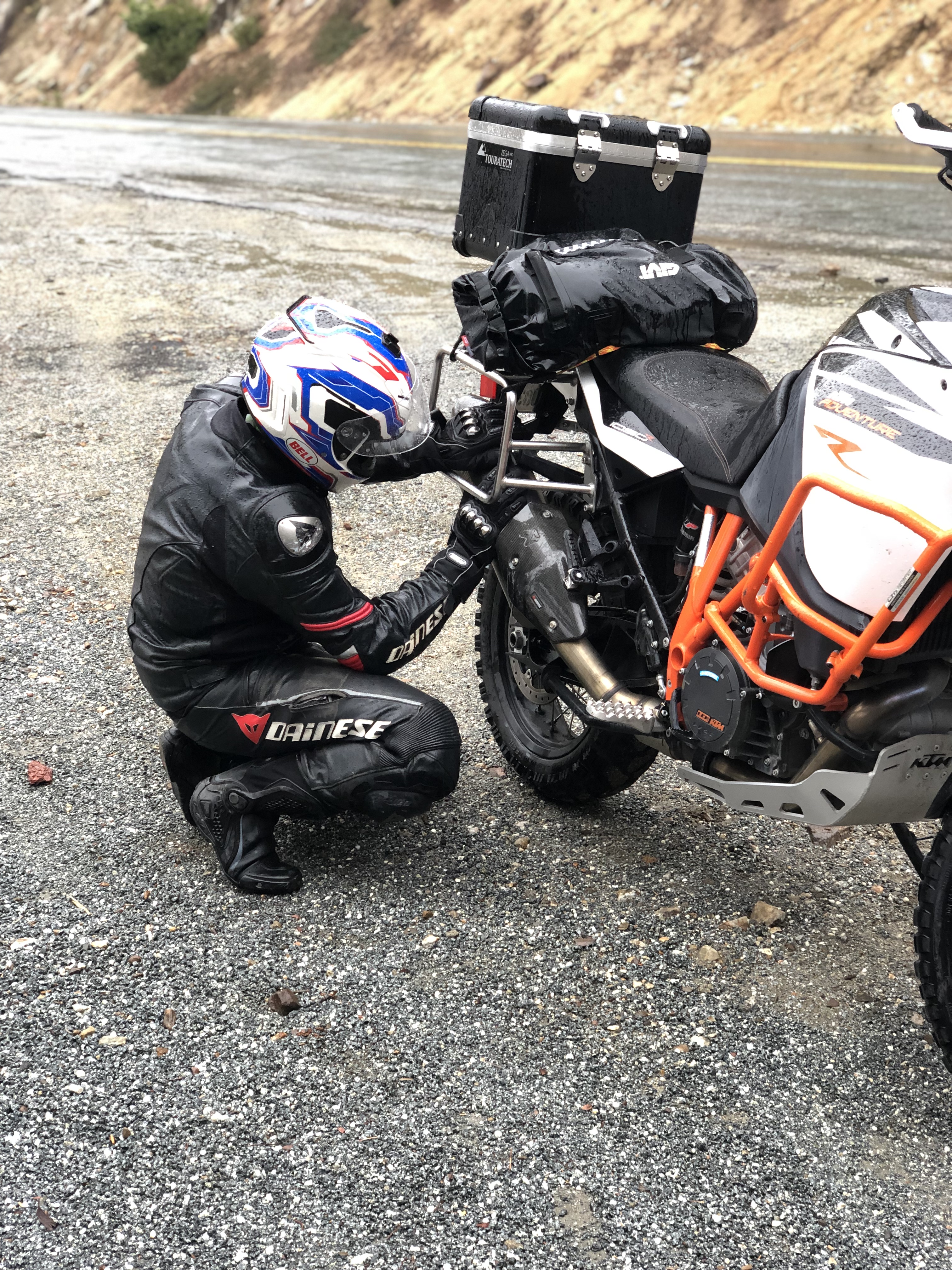 By the time we reach M90, The Great Western Divide Hwy, we were freezing. Anil was having doubts about hypothermia and I couldn’t see more than 20 feet from my fogged up visor. By the time we reached Ponderosa Lodge it had started to snow. The road was covered in a thin blanket of snow, and there was a moderate dusting on my windshield, bike and Aerostich. Things were getting crazy. Google Maps puts the elevation there at 7165 feet and the rains had turned into snow. While some of us were thinking about what to do, I was not really thinking at that point, Shobhit made the wise call to keep going. Things were not going to get any better unless we got off the mountain, so we pressed on. 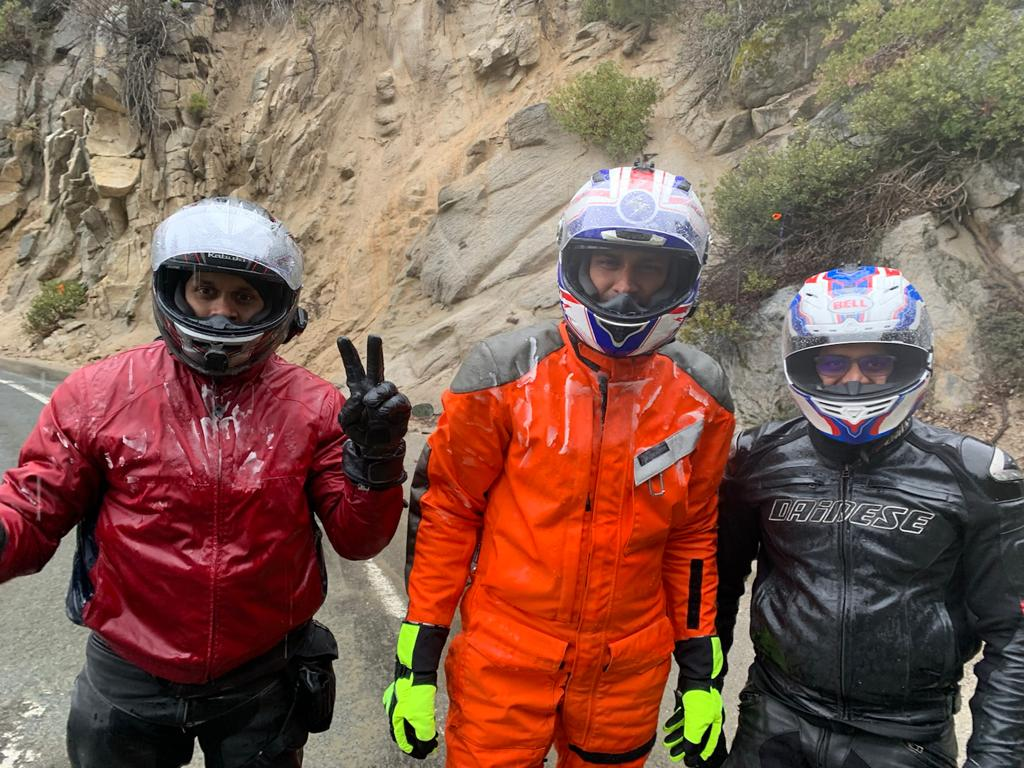 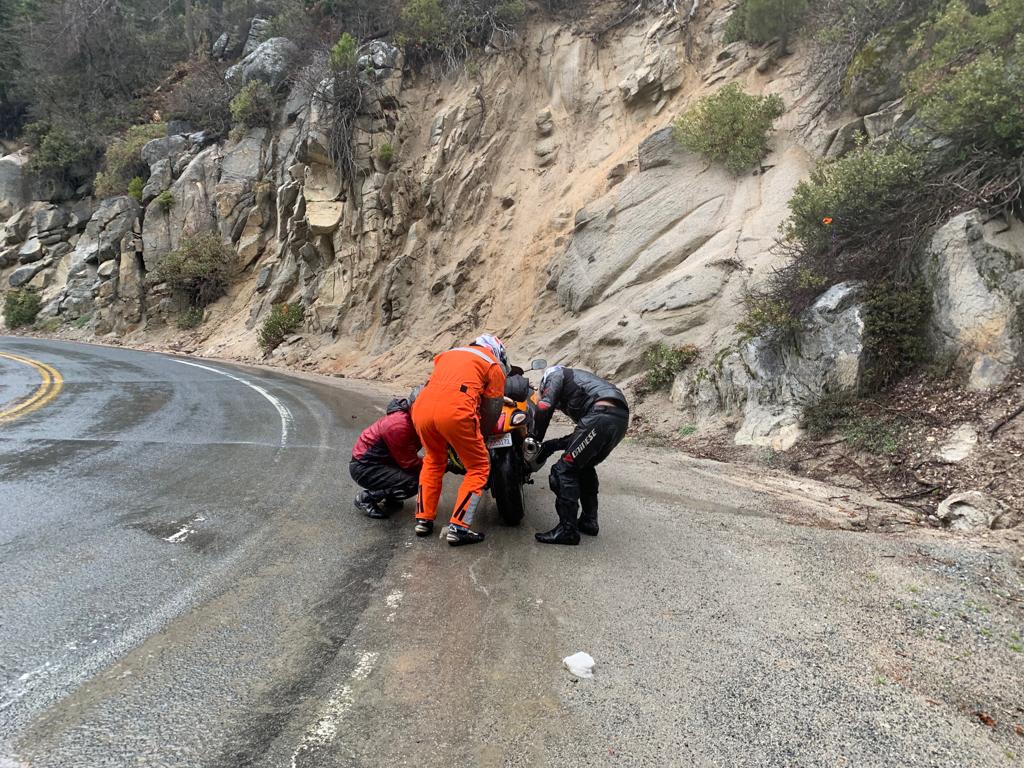 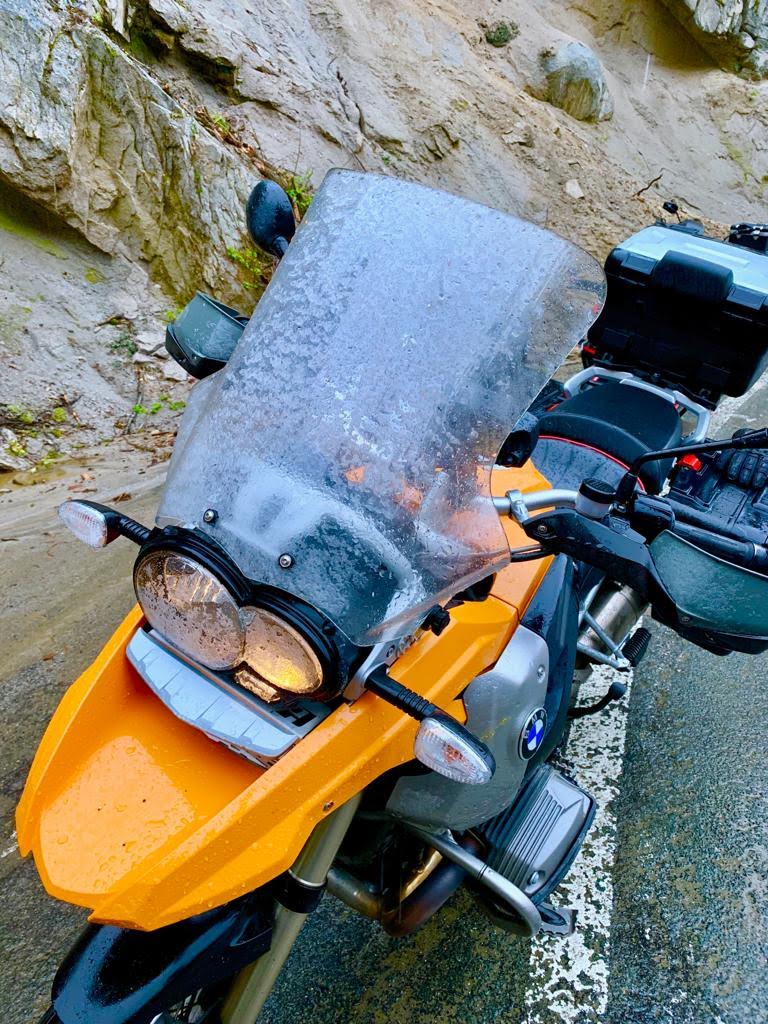 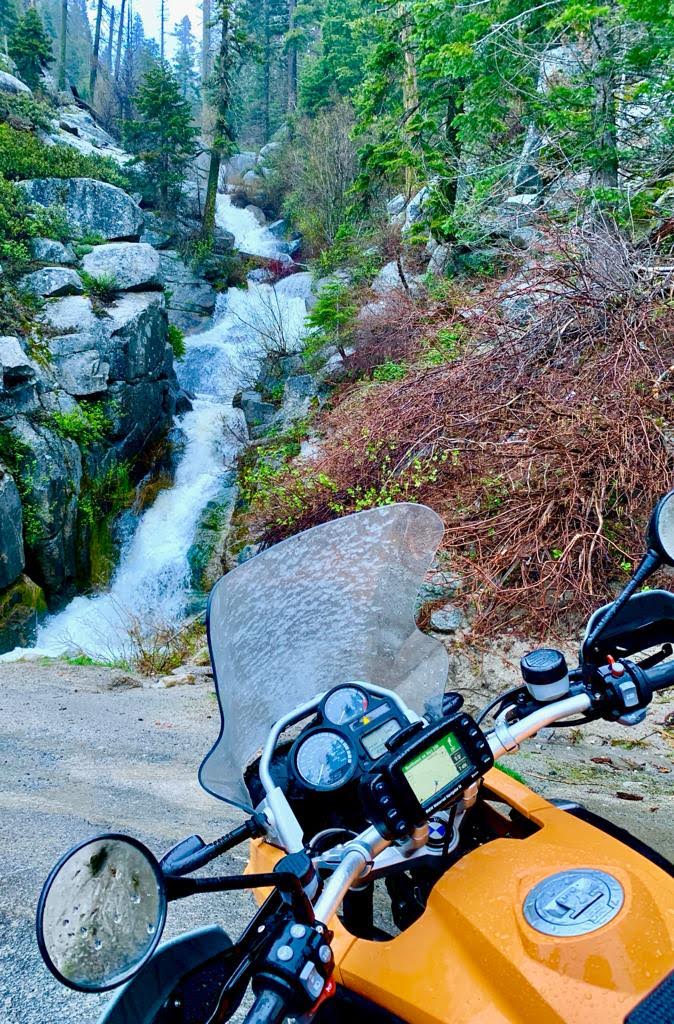 We pulled over for a beautiful waterfall on Hwy 90, and a bunch of hands went straight to the Busa pipes for some warmth. The rain had abated a bit and the clouds were starting to clear. Sravan caught this beautiful picture that perfectly captured the moment. We did find some warm coffee eventually at Pierpoint Springs Resort in Springville. No cell reception there, but I texted Shruti over wifi that we’re going to be late to our final destination. 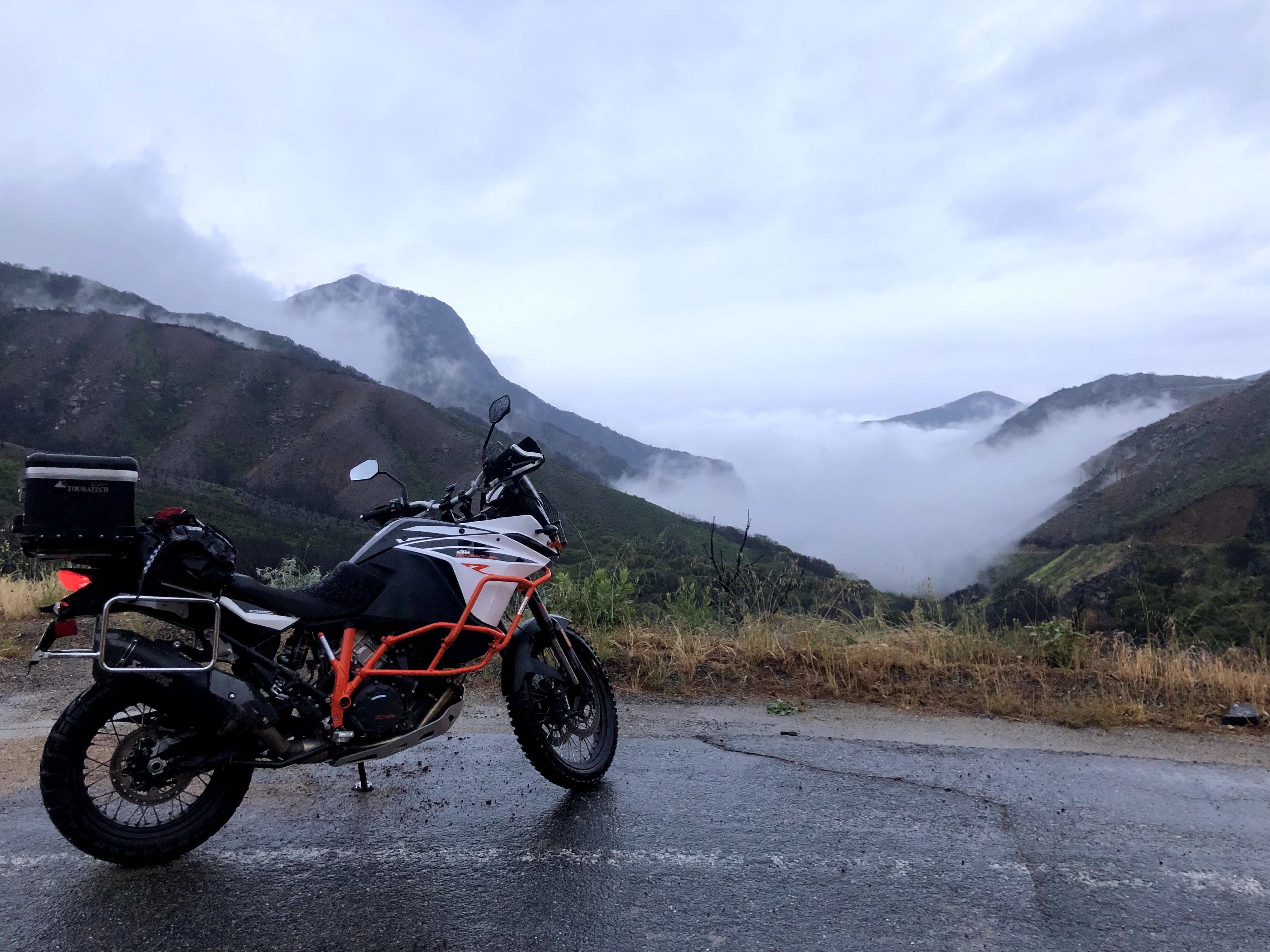 As we descended the mountain completely, the air warmed up, but the rain kept going off and on. The last 5 miles to Visalia were consummate True Grit. With a heavy downpour on the freeway, practically zero visibility, big cars and trucks passing us on the fast lane, I was holding on to the Busa for dear life. Somehow we made it to the hotel unhurt, but with a great sense of pride. Thankfully my Aerostich Roadcrafter kept me warm and dry. With 4+ hours of continuous rain the suit never leaked, even a bit and performed its duties to the fullest. I truly believe in that suit, it was well worth the high price tag.
We ordered some delivery pizza, while Ayon went for a foot massage. After a lot of scotch whiskey, we called it a night.

On the last day we had a decent hotel breakfast, geared up and were on our way. The skies were clear initially, and we made the long flat boring ride across the central valley on Hwy 198. Just as we hit Coalinga, it started to rain, and it got very heavy at times. We gassed up in Coalinga and rode Hwy 198 and Hwy 25 up to Hollister. This was the last twisty bit of the ride, so everyone was trying to enjoy it. With all the rain, the roads were wet and I was not pushing it at all. We caught a nice break from the rain at the intersection of Hwys 198 and 25. We got some nice pictures there. 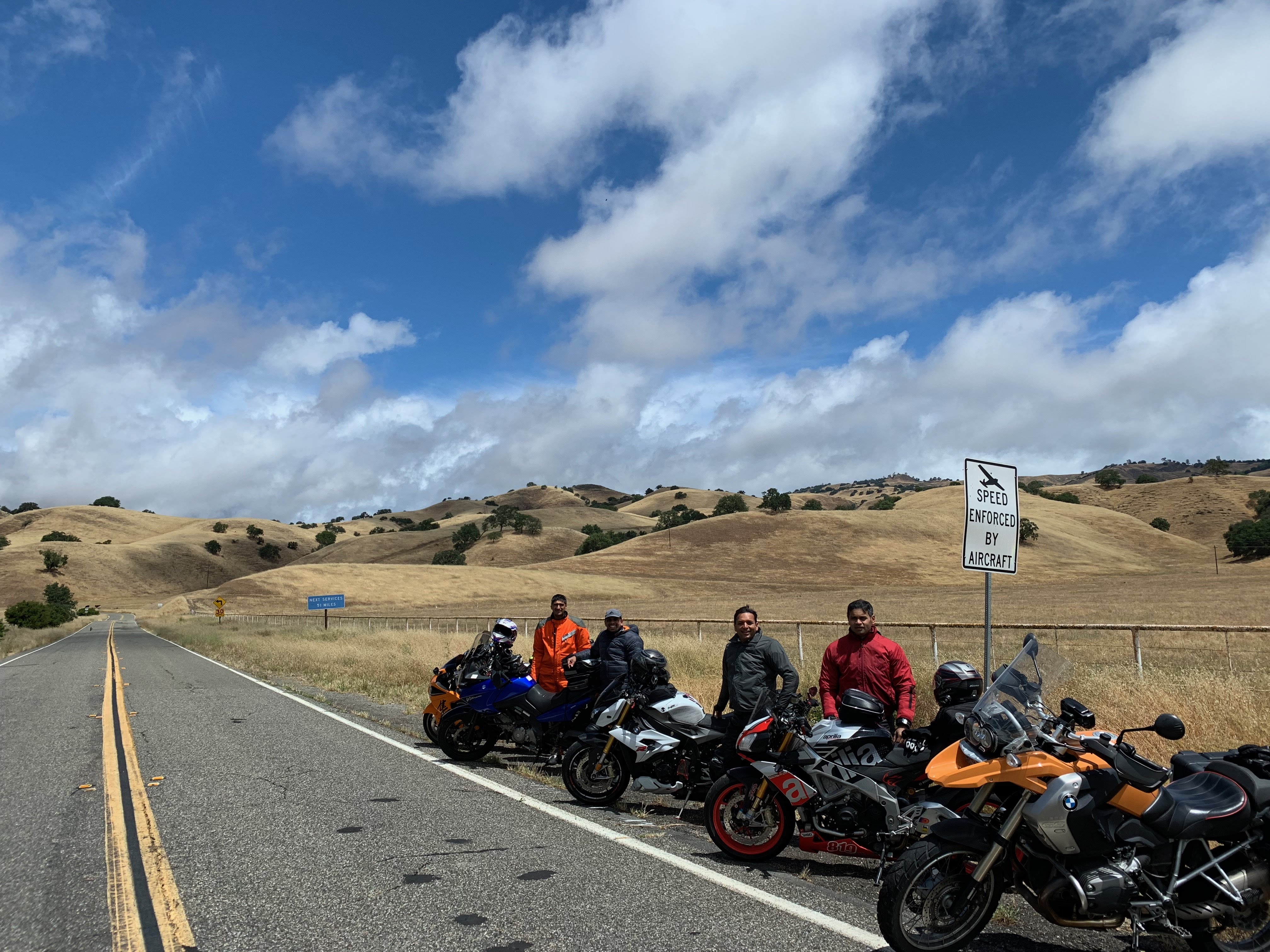 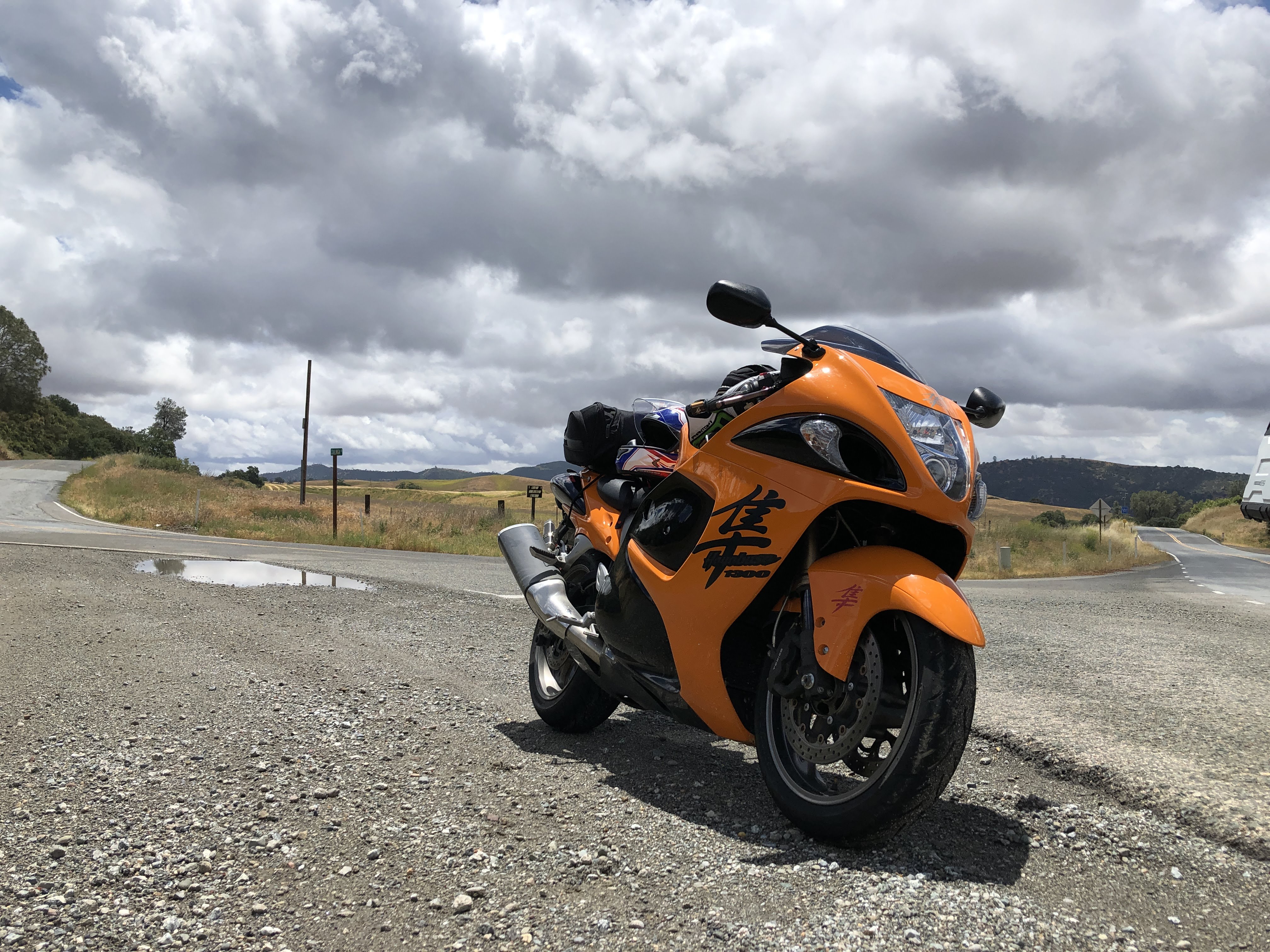 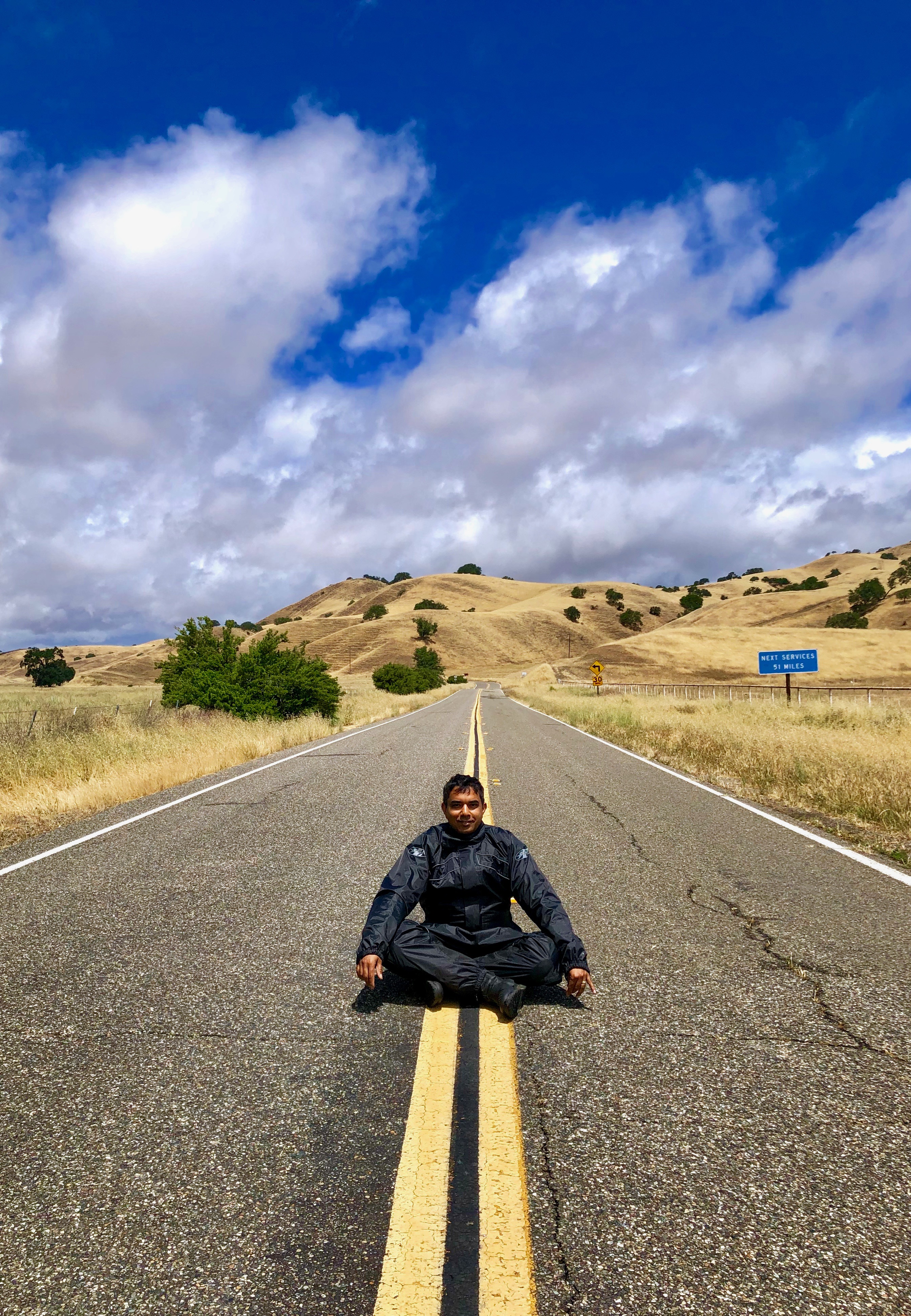 On Hwy 25, I stayed back with Ayon and Shobhit, riding cautiously on the wet tarmac. A few miles down the road, Sravan low sided his KTM Adventure on a lefthander. We all stopped, recovered his bike and thankfully he was OK. After reviewing the video of the crash, I was amazed at how little damage that did to the KTM. We took some pics and started back on our way. 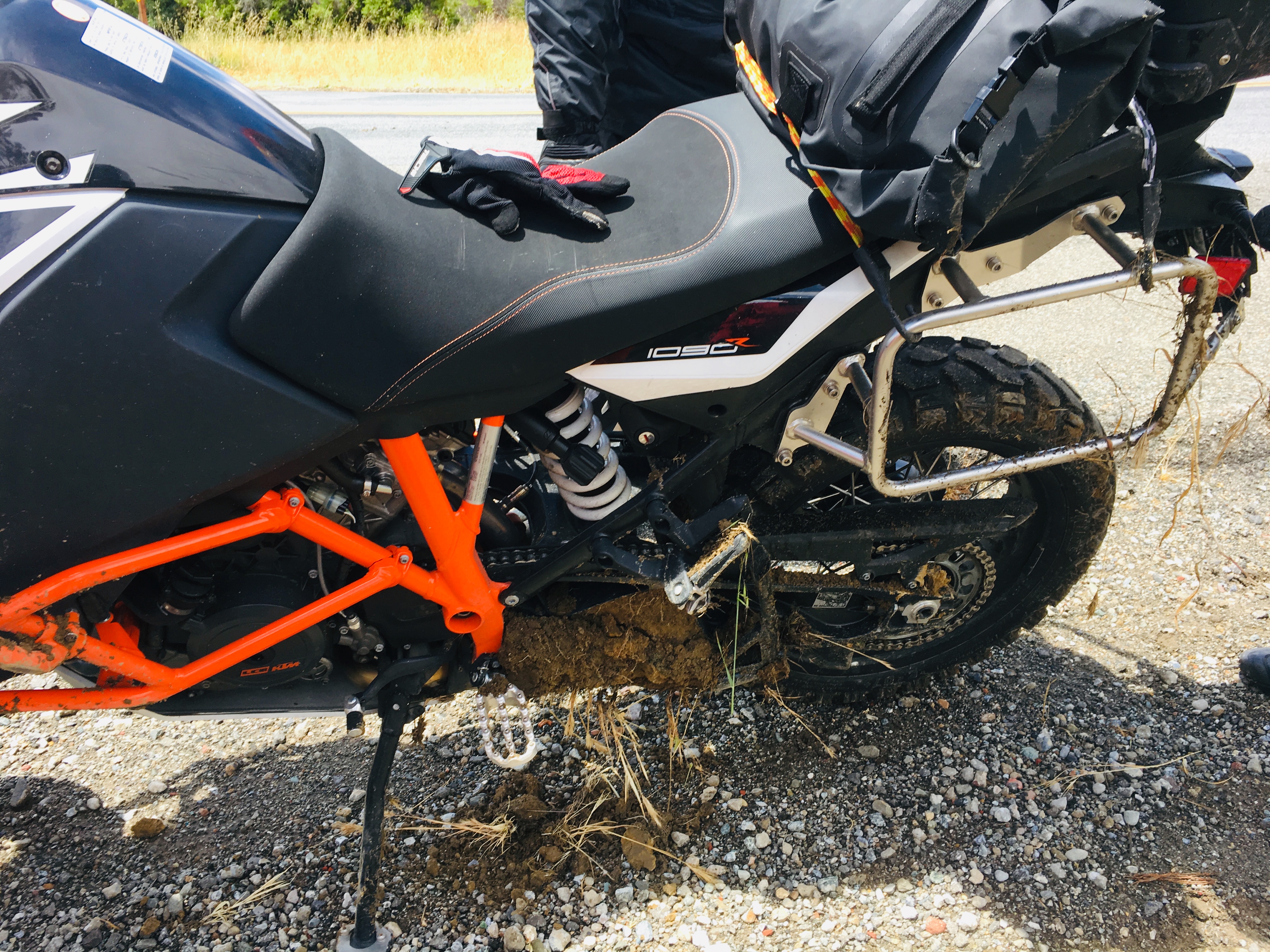 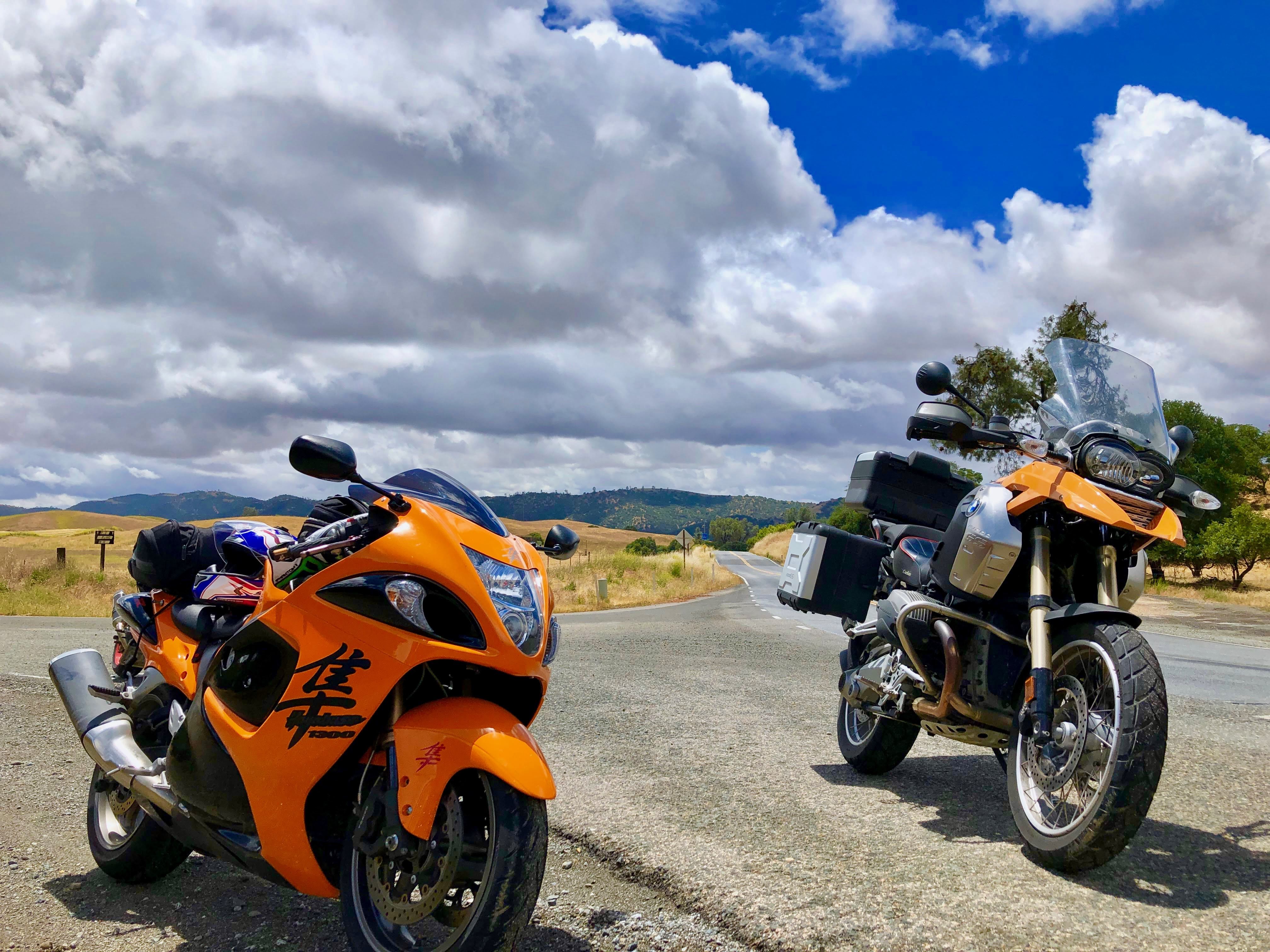 Lunch was at La Villa De Jerez in Hollister, continuing the Mexican choice for cuisine. We said our goodbyes there and rode back home. It did rain some more but at this point I didn’t care much. With the Aerostich, my body was warm and dry.

The Busa odometer showed a total of 881.9 miles. 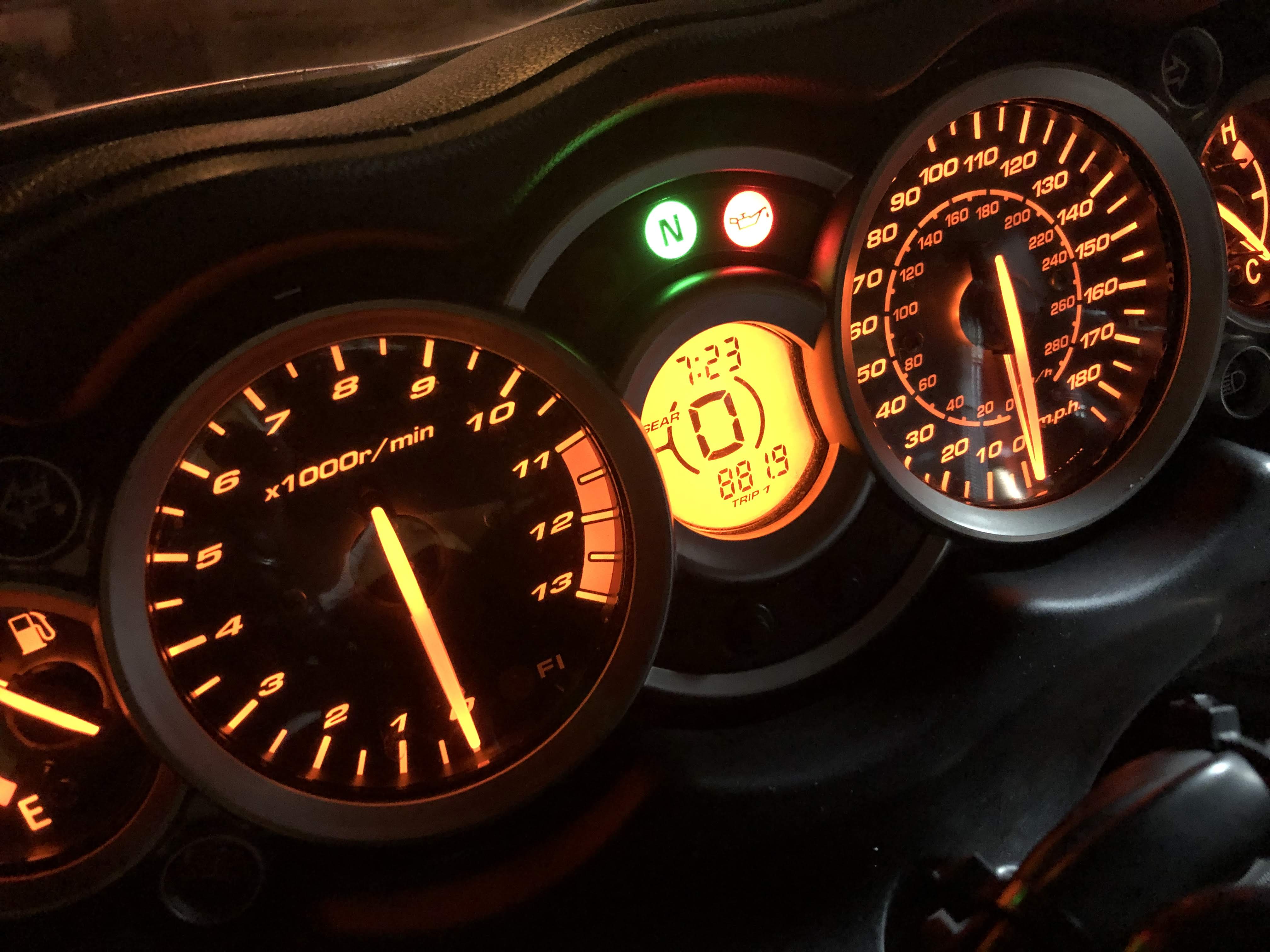