Among other things, Seattle has produced some amazing music, through the 90s, 2000s and even today. I don’t know when it went from grunge to indie folk, but every now and then I hear an interesting band, I Google the name, and they’re from Seattle. Coincidence?

Motorcycling, music and nature: there is some connection, I just don’t know yet, or maybe I do. Like Kurt Godel’s connection with Escher and Bach. Maybe the neurons in my brain treat these experiences in the same way. Or maybe I’ve developed a cognitive association, so my brain thinks that riding a motorcycle is a like hiking a trail in Yosemite. 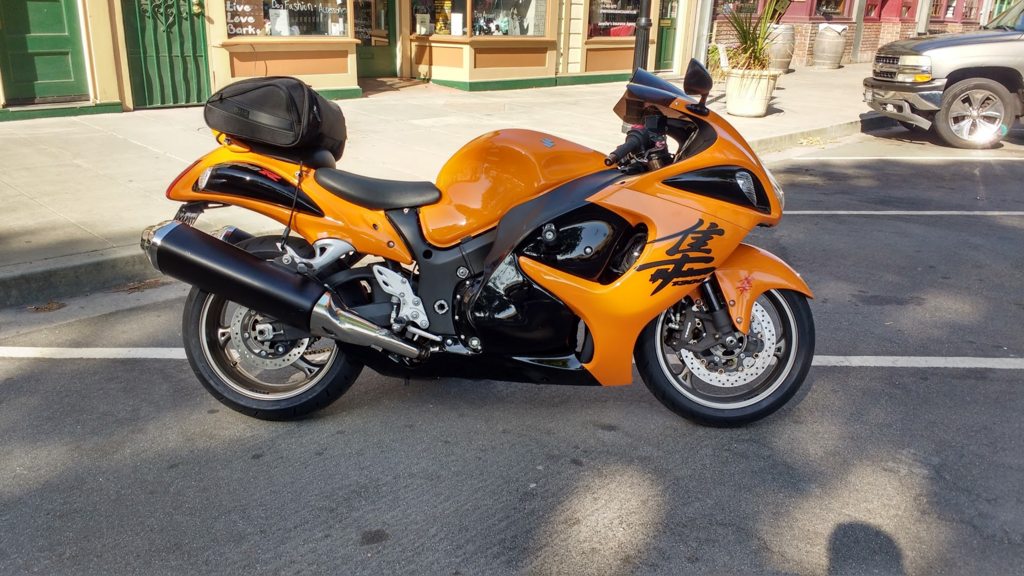 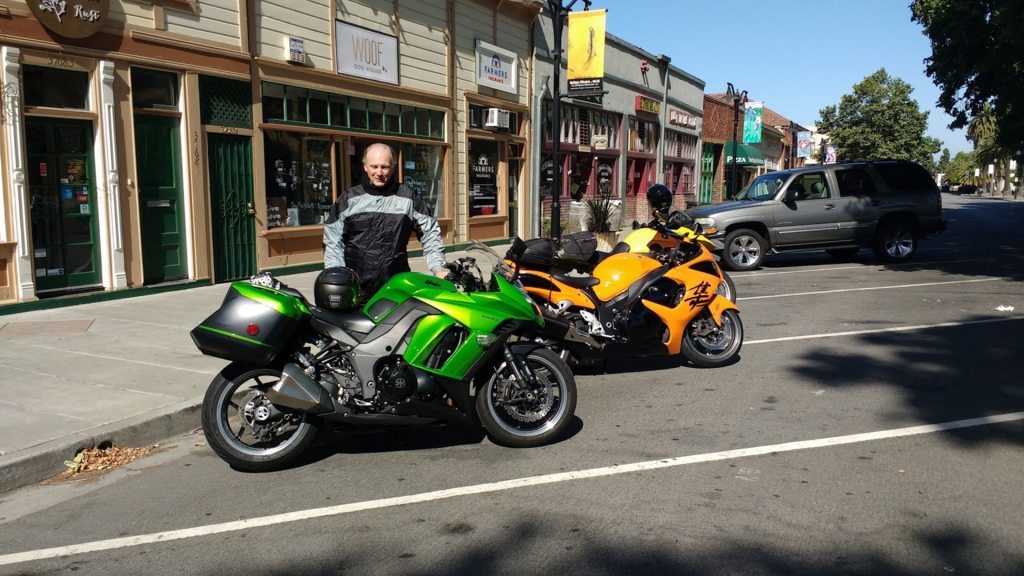 Our first stop was at Boonville, CA along Hwy 128, which is a long ride from Fremont, most of which is on the freeway. It was getting hot by then so the mesh gear helped. The Hayabusa handled the freeway with ease, it’s just mostly putting along at speeds below 100 mph.

There is a little bit of fun on Hwy 128 before you hit Boonville – I played around with the Busa, throwing it bit by bit into the turns as I started getting comfortable. Lunch in Boonville was at the Buckhorn Pub – below average food with average beer. It was 100F by then. The problem with Boonville is that there’s this awesome brewery in town but they don’t serve any food. Food is a mile+ away, so you have to skip it, or bring it with you to the brewery which is not easy on a motorcycle. I also noticed that the restaurants are expensive in Boonville. 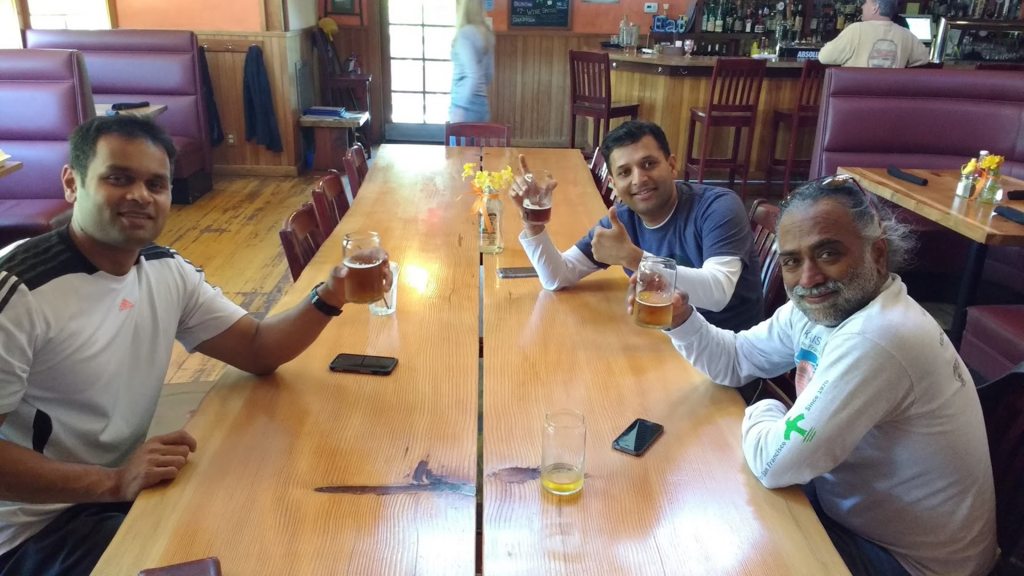 We continued on Hwy 128 and turned off on Flynn Creek road. Rode to the little town of Comptche and took Comptche – Ukiah to the coast. Both these roads we nice, with thick forest cover, low traffic, good tarmac and nice turns. On Hwy 1 we road up to Fort Bragg and stopped for coffee. It was in the low to mid 60s on the coast, much cooler than the inland, so some hot coffee felt good. 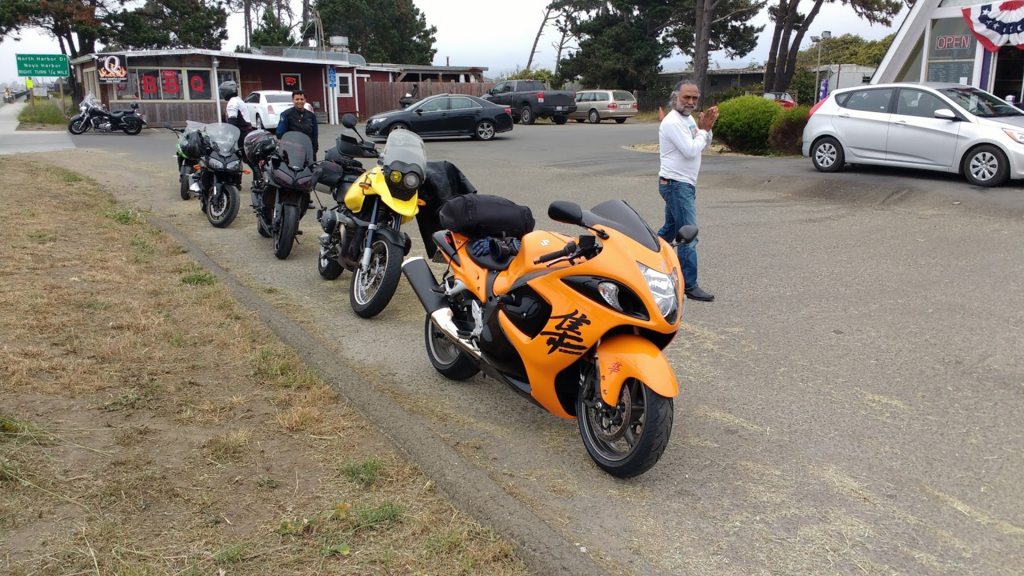 We continued along Hwy 1 – riding the incredible stretch between Westport and Leggett. I’ve ridden this part of Hwy 1 a few times now and it is by far my favorite part of the coastal highway. We gassed up at Leggett, at the same gas station where I bought my Ninja 1000. The kid manning the gas station was talking about how cannabis prices have fallen drastically since it’s become legal in CA. Hah, who would have known!

Our next stop was the Avenue of the Giants, CA Hwy 254. There was a little bit of twisty fun at the beginning and road is pretty scenic but the whole experience was a tad underwhelming. Maybe I’m just spoilt having been to Muir Woods and to Sequoia NP so many times. The “Giants” were magnificent, yes, and the shaded road in very scenic. 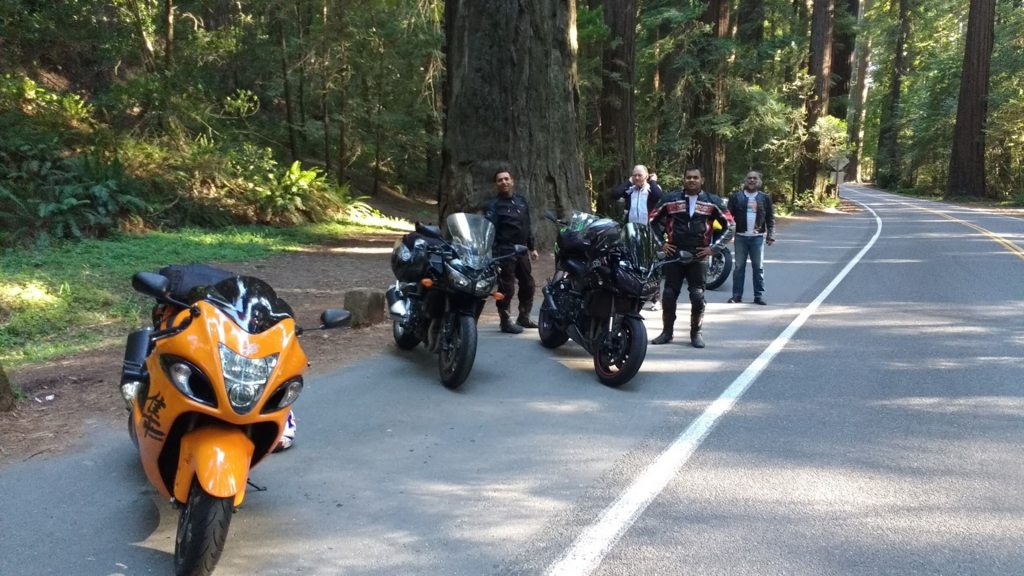 We switched bikes briefly while Shobhit rode the Hayabusa and I rode his FZ1. We rode 101 to our hotel in Fortuna (The Redwood Riverwalk hotel) and had dinner at the Eel River Brewing Co. The food and the beer were both great after which we retreated to our rooms. The drinking continued a little with some nice Battlehill Invergordon.

On day 2 we left early after having breakfast at the hotel. We took Hwy 36 to Hwy 3. Both roads were superb as expected, having ridden them back in 2014. There was a little bit of construction on the west side of Hwy 36 where the road narrowed to a single lane. We didn’t stop in Mad River or Hayfork, but continued on towards Weaverville where we had lunch at the Stagecoach Pizzeria and Cafe. At this point, Bill decided to leave the group and ride straight to Willow Creek, our final destination for the day.

We pressed on, Hwy 3, through Trinity Center, Coffee Creek, Callahan and Etna. These are all really small towns, like 5 houses and a store each. It was very hot again (105-110F) and the tar snakes were making it tricky to ride. I slowed down considerably, not keen on pushing the big bird on soft unstable tarmac. We stopped at a Trinity Lake vista point and took a much needed break from the heat. 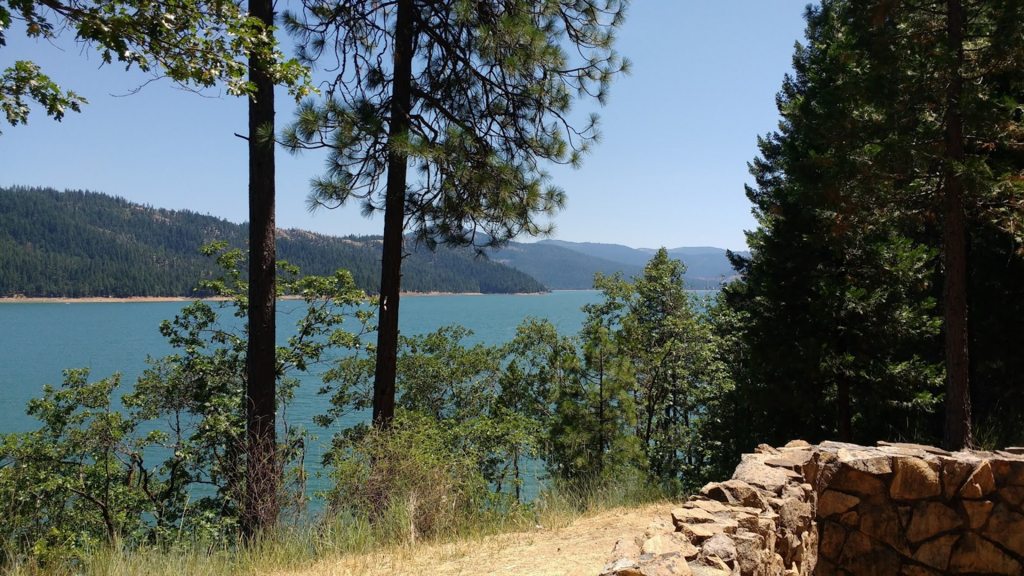 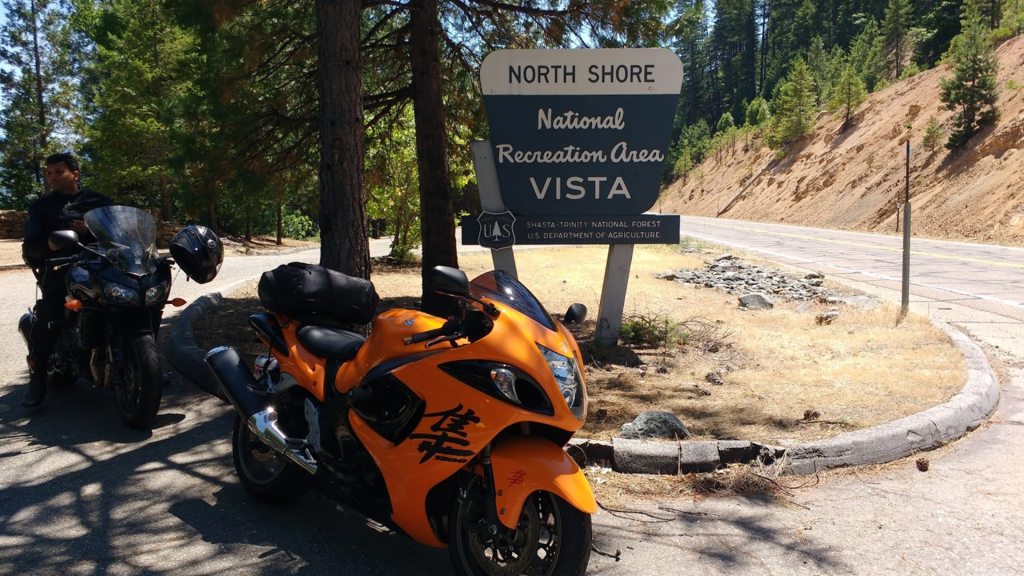 We gassed up in Fort Jones and took Scott River Road towards Hwy 96. This is a nice goaty single lane road with steep drops and no barriers on either side. We stopped for a dip in the Scott river (now easily 110F). 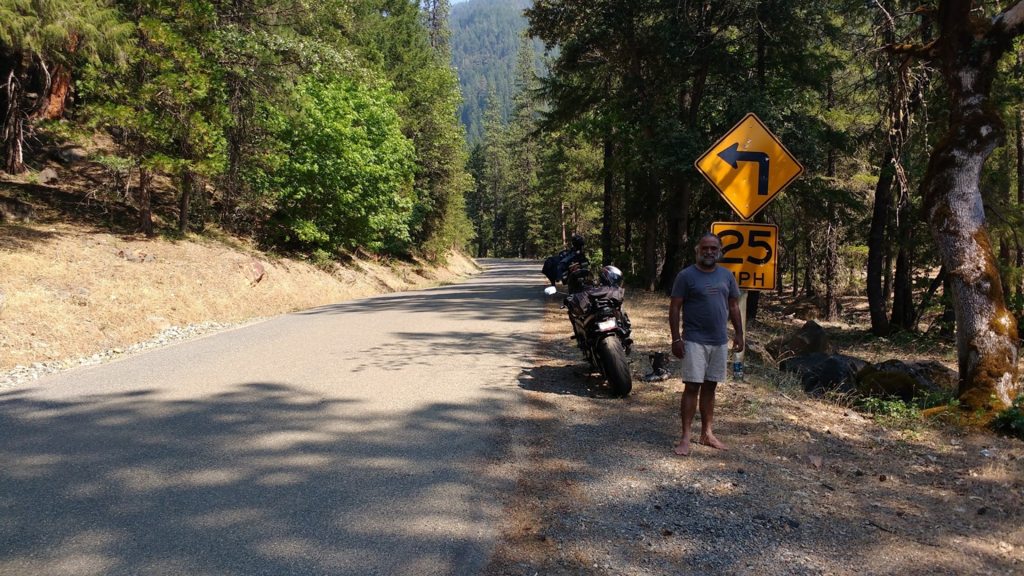 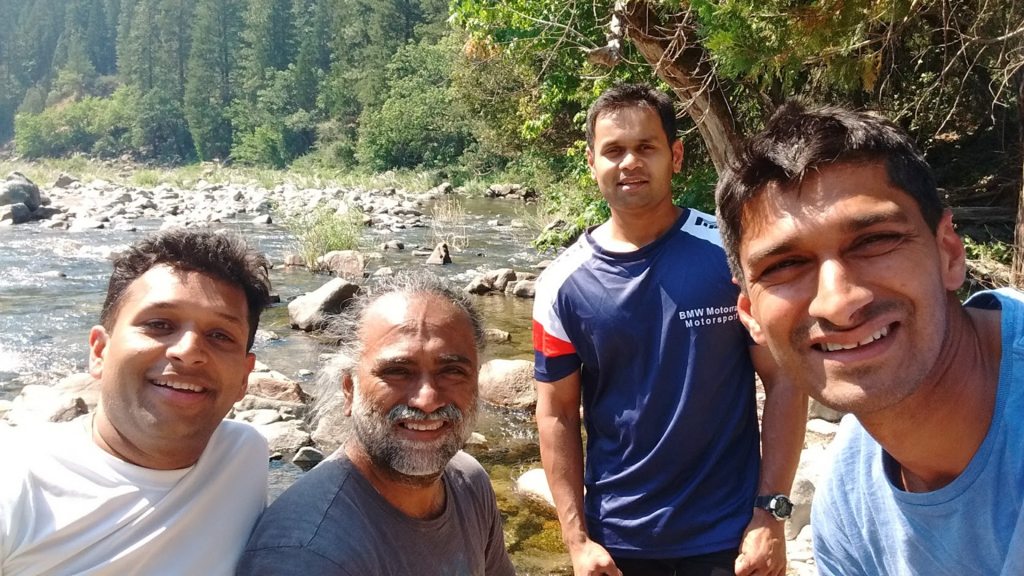 Hwy 96 was a great discovery. It’s not a tight racetrack like Hwy 36, but it has wide open sweepers with a clear view of the road and amazing scenery to go along. The small towns along Hwy 96 are quirky filled with interesting people. We stopped for gas in Happy Camp. Here’s a picture with Bigfoot. 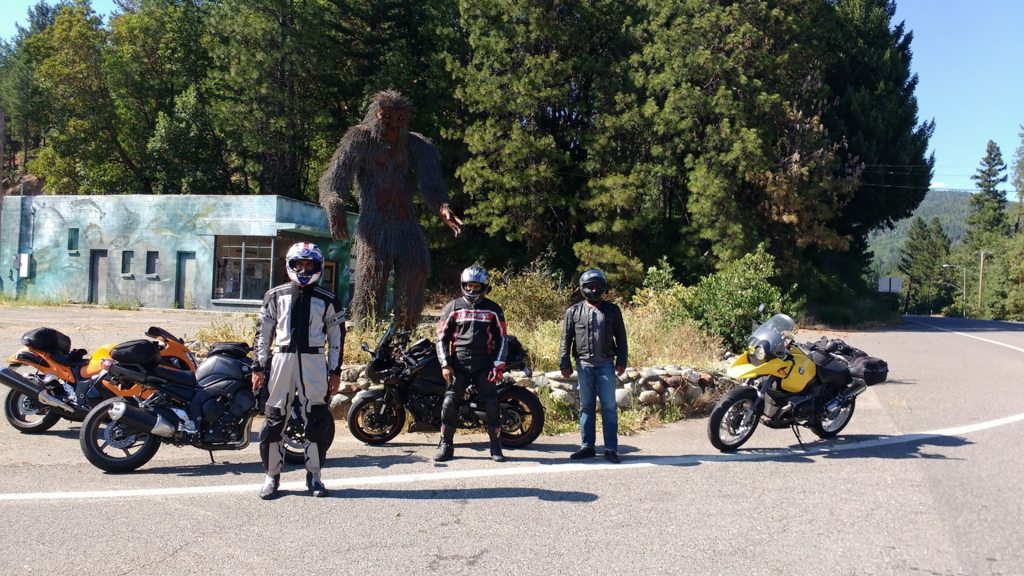 Shobhit and Akshay decided to ride on to the Oregon border from here. It’s only 20 miles or so, but being exhausted from the heat, Bobby and I decided to stay back in Happy Camp. We chatted with the locals in Happy Camp and their stories were truly amazing. One guy was a fire captain with 7 kids who talked about his daily work routine during the fire season. We also chatted with the lady who worked at the town store. Turns out her sister was married to the fire captain. Then there was this other lady who seemed paranoid about an impending nuclear disaster there. We met a few more – a Ukrainian programmer and a Nigerian girl wearing a Black Lives Matter hoodie … who spoke Hindi… really bizarre town. 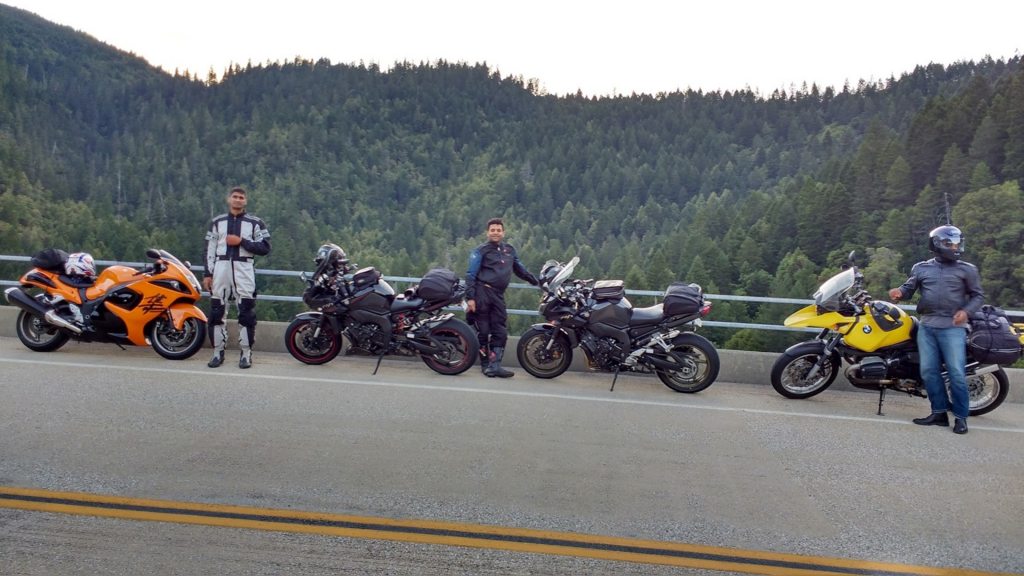 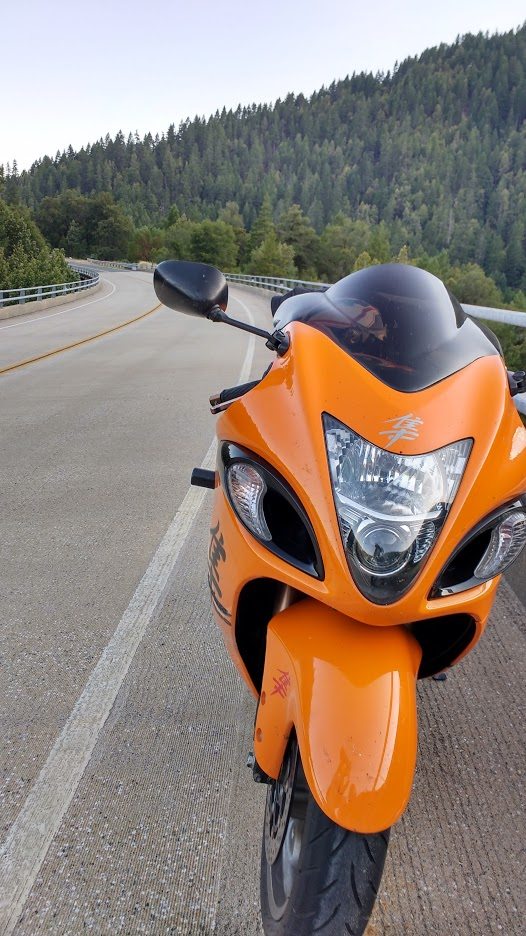 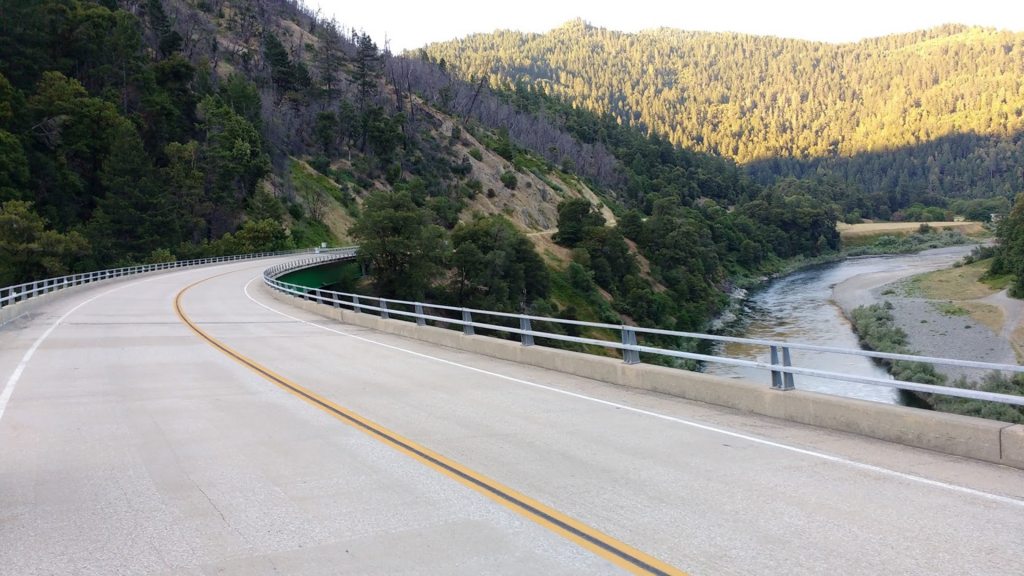 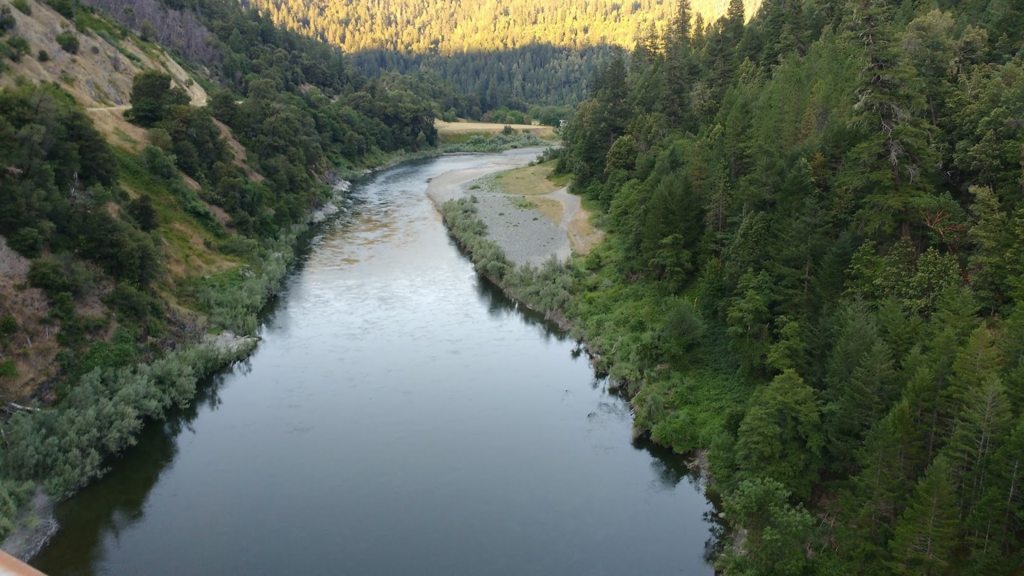 The rest of Hwy 96 was excellent. This is a relaxing road, great for cruising along without worrying about blind corners. The road follows the Klamath River, gently meandering through the mountains. There was no traffic at all – we probably passed 4 or 5 cars on that entire highway. We rode through the Indian reservation and made it to our hotel (The Bigfoot Motel) in Willow Creek. Dinner was across the street at Pizza Factory after which we sat outside our hotel rooms for some more drinking. We ended up chatting and drinking till late at night with Bill entertaining us with many of his stories.

By the third day we were quite tired, so we decided to head straight back home. We rode Hwy 299 to Weaverville and had omelettes at the Nugget. It was the 4th of July and we were just in time for the parade. As we started to make our way out, Shobhit’s battery died. A local policeman tried to give him a jump, but the FZ1 battery was completely dead. Being the 4th of July, most stores were closed, but luckily a local mechanic spotted us and came to help. He went over to his shop and brought Shobhit a replacement battery and we were on our way.

From Redding we took I5 all the way home – the long, straight, boring freeway, but we were eager to get home soon. Bill left us at Redding as he went to see his mom. We made it back home, tired, but in a good way. The Bay Area had cooler weather (90s) and that was a big relief. 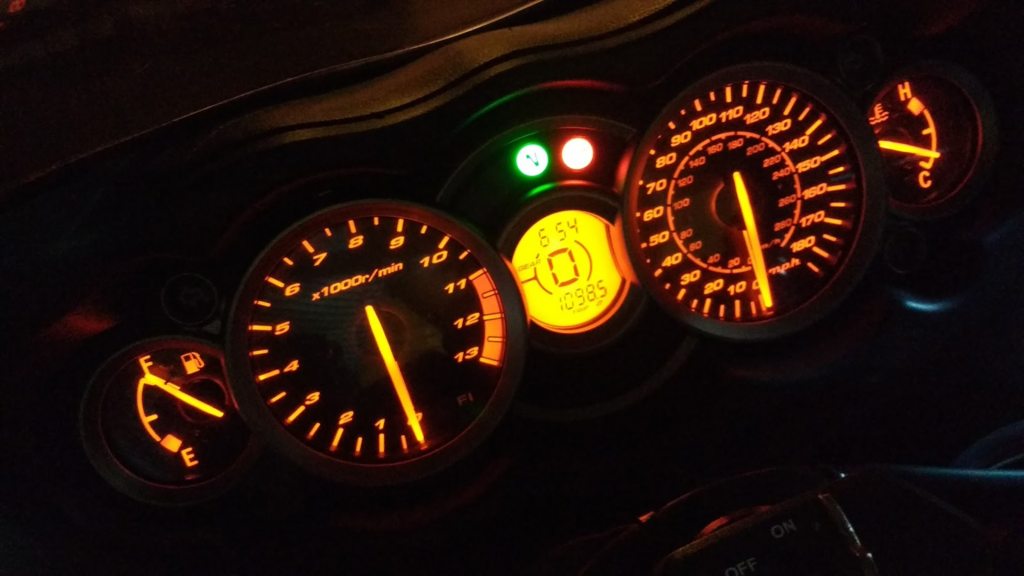 A thousand miles on this bike now and I’m starting to get to know her. The bike obviously has tremendous power, but the pull in the 5k-9k rpm range is downright scary. It corners well for being 575lbs. It’s not a nimble 600, but it is a mighty fast and comfortable touring bike.