I have always wanted to explore the dirt roads in and around Big Sur. We did it briefly in our FJ Cruiser last year and I’ve ridden the paved street roads there several times (see RR21 from 2012). So at the start of Thanksgiving week 2019 I roped in Ayon (Honda CRF250L Rally) and Gokul (BMW F800GS) and we set off to explore the area.

We met in South San Jose on a cold morning. Gokul accidentally dropped his bike at the meetup spot, which turned out to be a recurring theme. We took the usual Uvas and Hecker Pass roads over to the coast and gassed up in Carmel.

First road on the agenda was Coast Road which runs between Bixby Bridge on the north end and Andrew Molera SP on the south end. 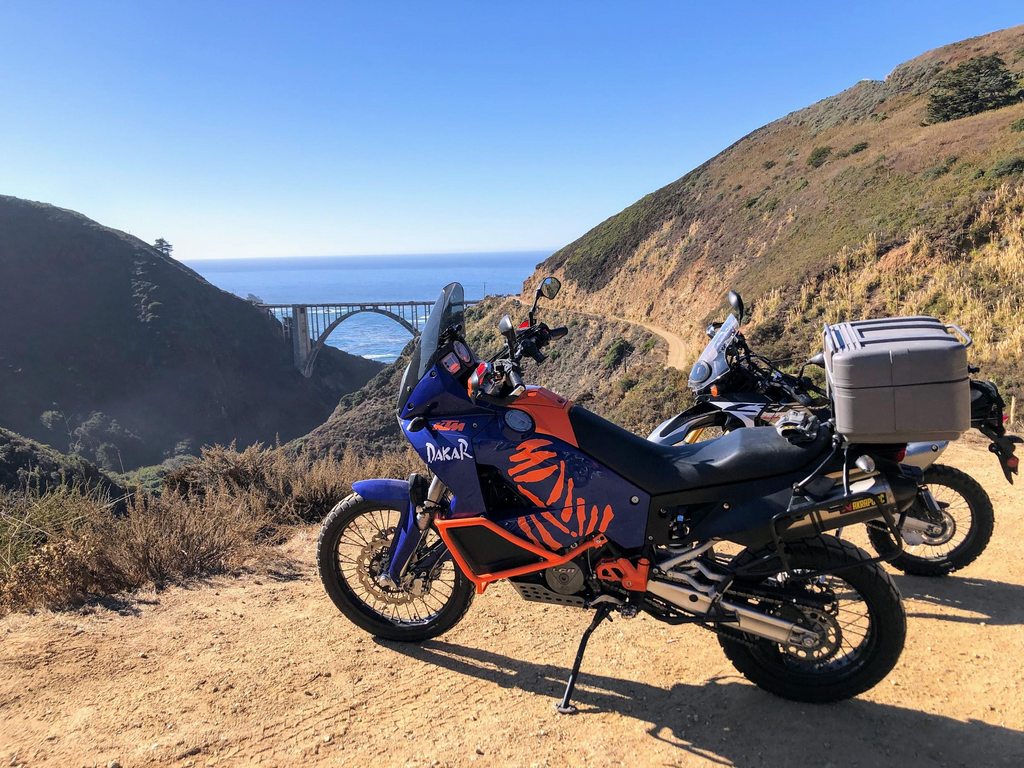 The road climbs up and down a few times going through some coastal redwoods and offers beautiful views of the coast. 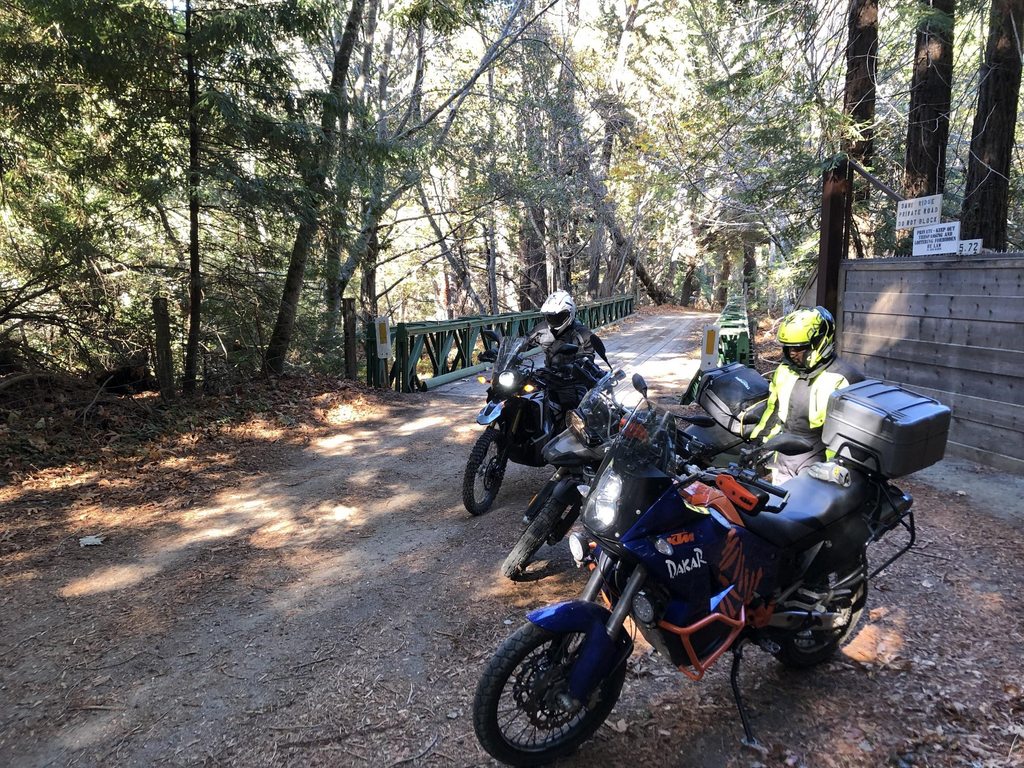 After Coast Road, we rode into the town of Big Sur, gassed up and rode 20 miles south to Plaskett Ridge Road. The plan was to ride up Plaskett Ridge to Coast Ridge Trail. 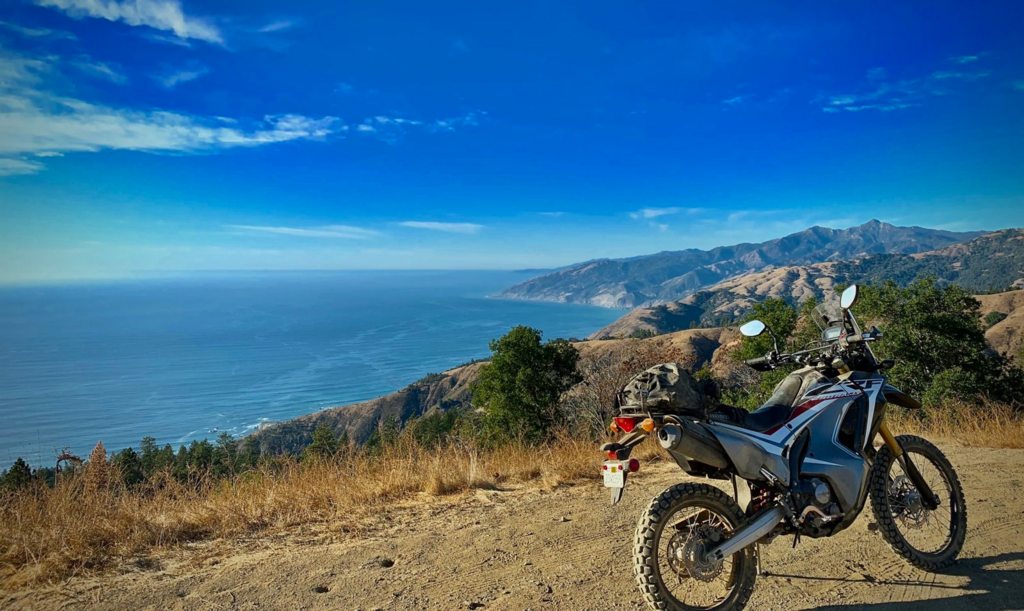 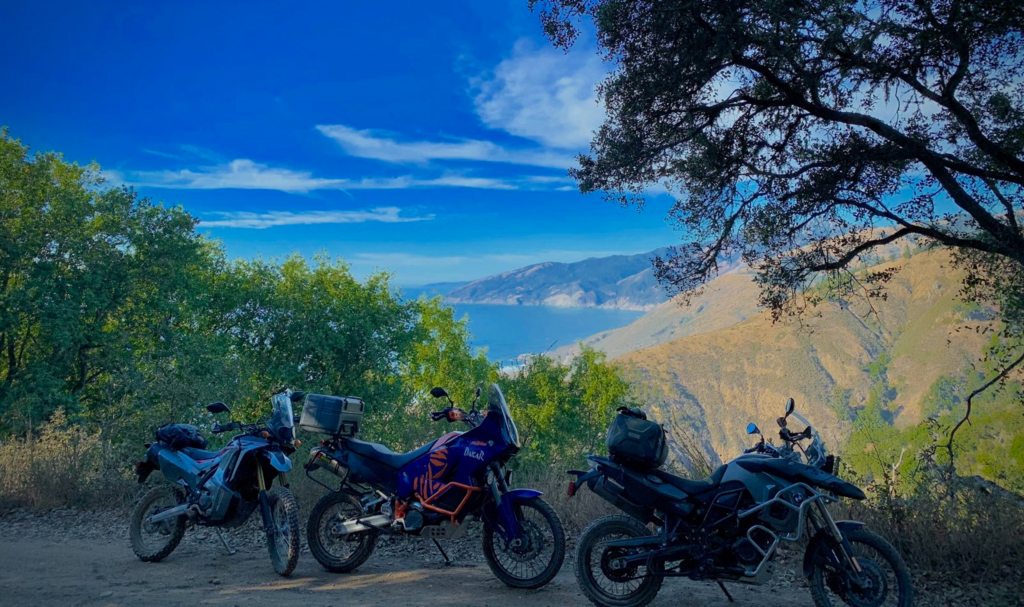 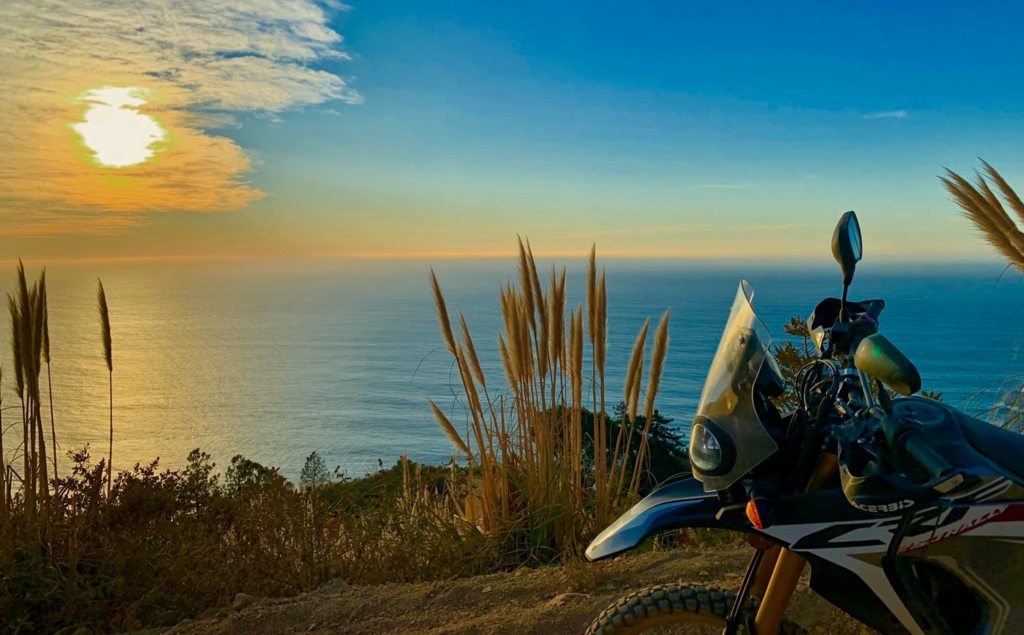 Plaskett Ridge was easy to ride initially, but the dirt turned to loose sand in a few miles, Gokul had another spill and we helped him ride up some of the tricky spots. We breaked for lunch at this nice picnic spot… 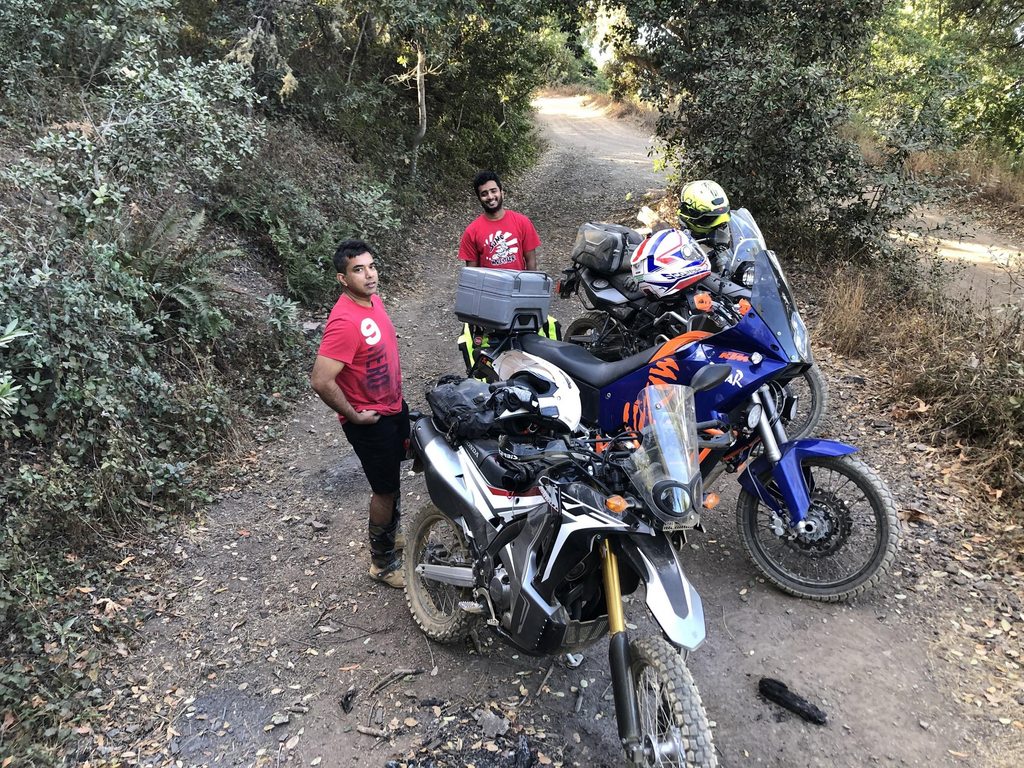 And had a few beers there… 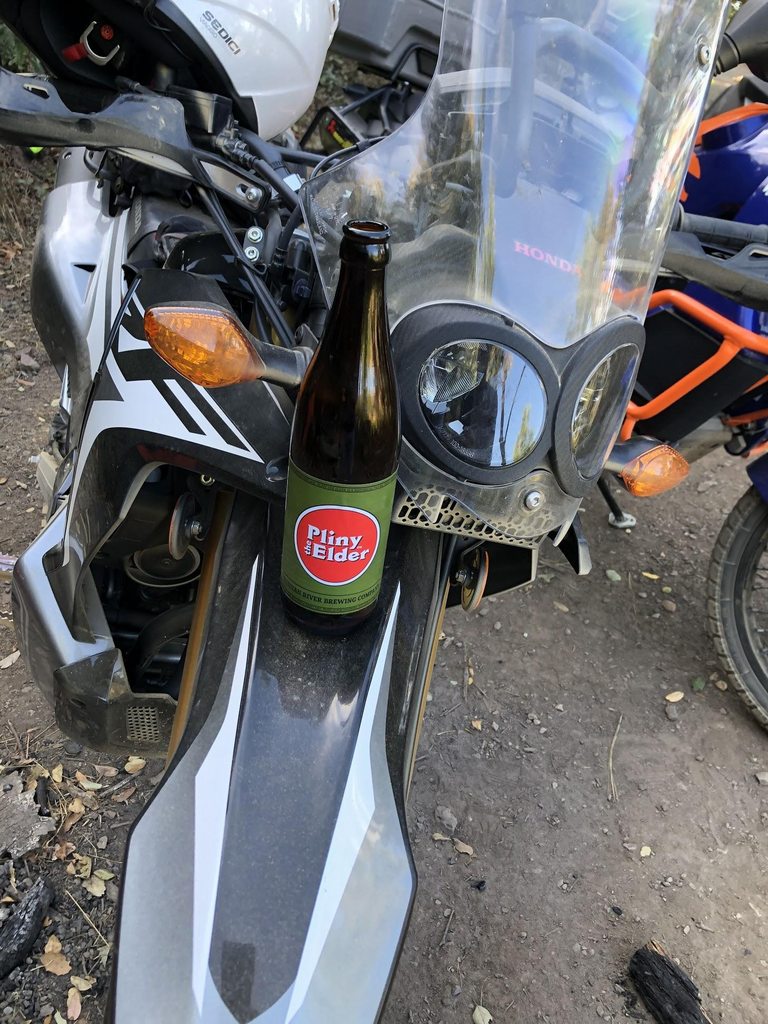 As we continue along Plaskett Ridge, this happened… 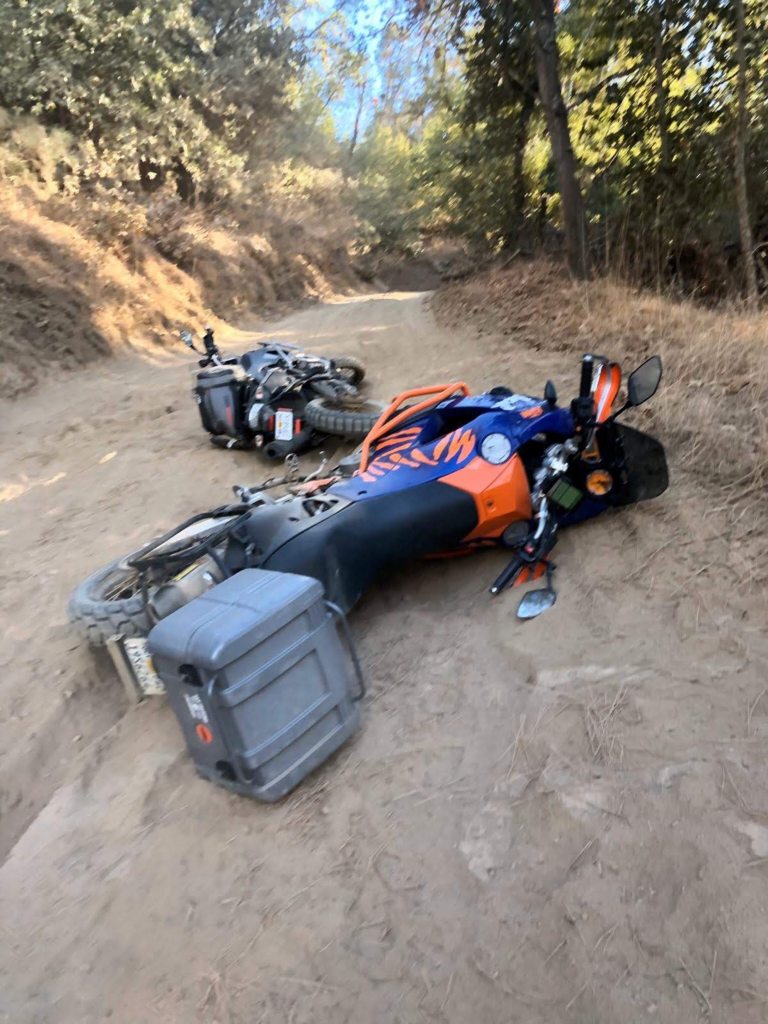 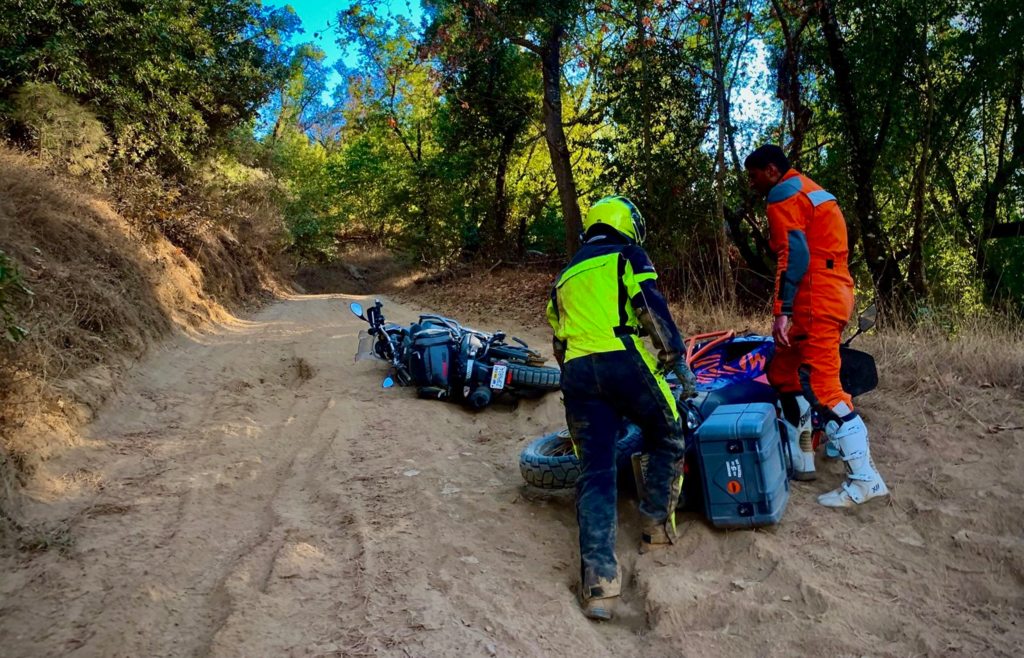 Not a hard fall, just a soft drop! First time I dropped the big gal; it was inevitable on Plaskett. The sand was so deep it was up to the swingarm and bike was simply not going anywhere. At one point I lost my footing and dropped the bike. We picked up all our bikes (all 3 were down) and somehow made is across the sandy parts.

Gokul was still smiling after multiple spills – good attitude👍 I probably would have been distraught if I had crashed so many times. 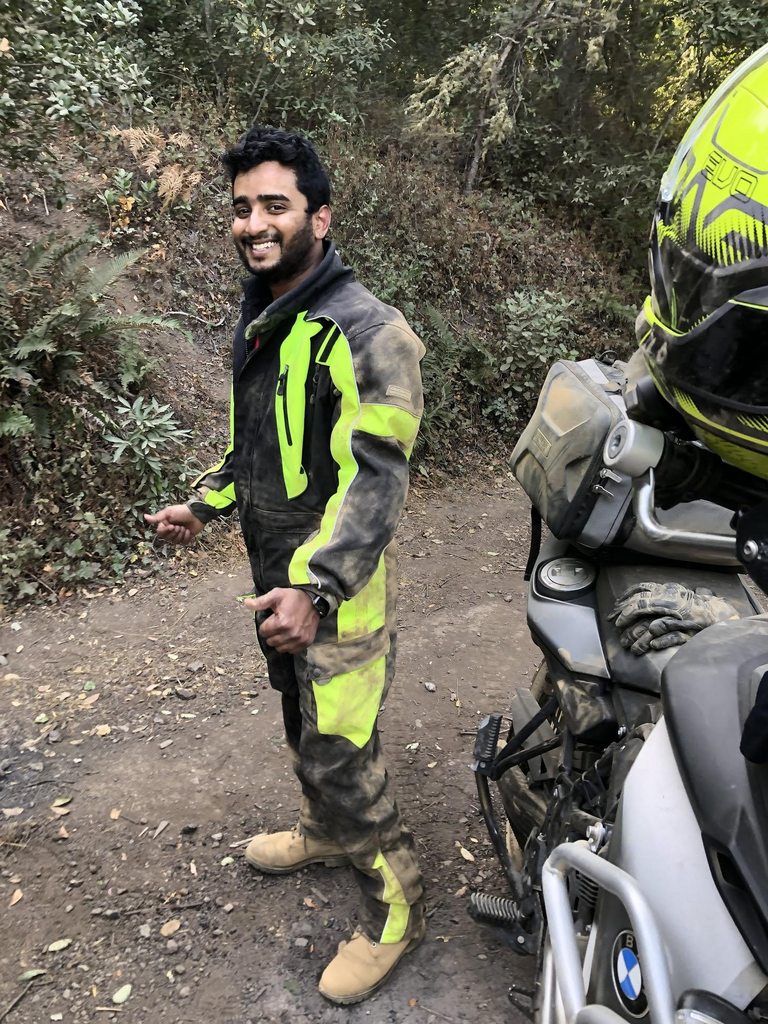 We crossed several beautiful campsites (note to self – take the family for dispersed camping to Big Sur) and made it up to the top of Plaskett where we came across a locked gate. The gate had a “No Trespassing” sign, so we stopped and were mulling about what to do next. Clearly Google Maps did not know the area well. A few minutes later we hear gunshots and someone on a megaphone yell “Get Out” and “Leave or get shot”. I’d say he fired at least 6-10 shots over a minute! We turned around and left asap – retracting our path on Plaskett Ridge.

Thankfully going down on Plaskett was not as hard as coming up and neither of us crashed. We made it back down to Hwy 1, shaking a little. 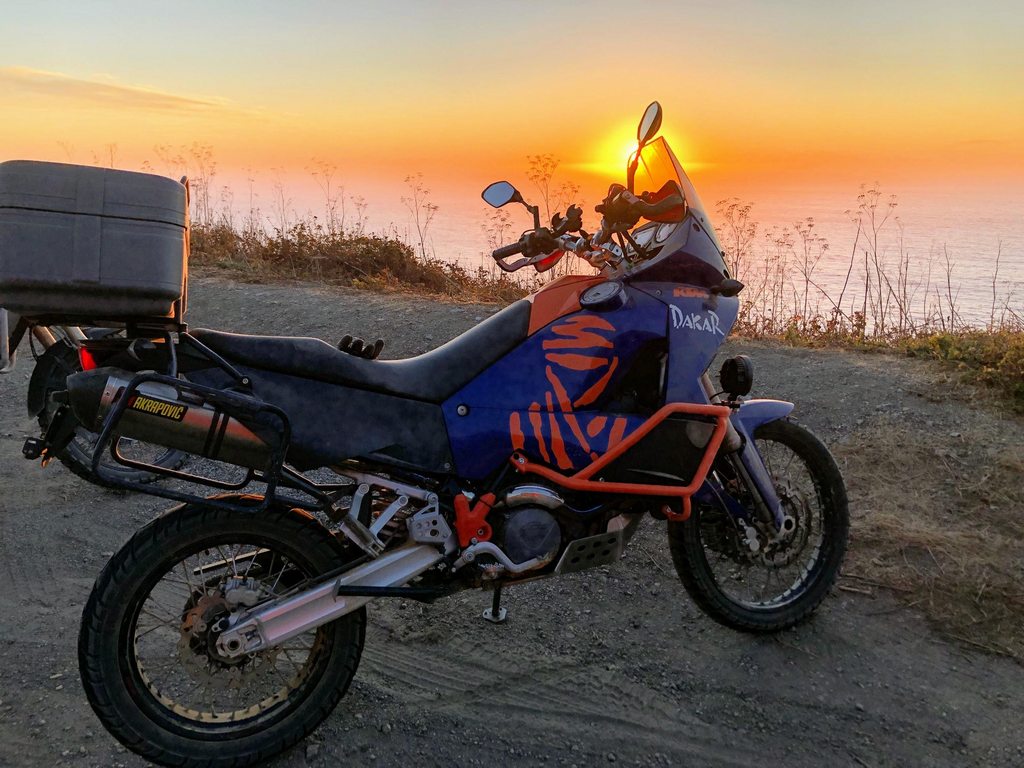 The rest of the ride home was uneventful, except that it was getting dark and riding Hwy 1 in the dark is no easy task. Thankfully we’d overcome bigger problems that day and we made it home safe and sound. This ride turned out to be a true adventure!