On the third of July, 2020, I did a track day at Laguna Seca with Fun Track Dayz in their Novice “C” Group.

The idea for a track day was originally proposed by Anil and since I’d never been to Laguna Seca before, I signed up and was excited to do this track day. I rented a trailer from U-Haul and trailered the SuperDuke down to Salinas with my FJ Cruiser. Along the way, at about 7am, I got a call from Ayon that he has a flat tire. I took Bailey exit off 101 to help him and noticed the rear tire of his Subaru was completely shredded. We put on the spare stepney, pumped it up to 60 PSI and were on our way. We made it into Laguna Seca just in time for the morning meet & instructions.

There were four sessions in the morning, 9am, 10am, 11 and 12 noon. C group was running the first of three sessions of the hour and so Ayon and I got out onto the track for our first session at 9 a.m.

The first session Was really about feeling the track, learning the lines and taking it easy. We were behind the instructor at all times and we’re doing a steady moderate pace. Laguna is an excellent track with lots of ups and downs. The trickiest turn was the corkscrew (T8) – where the left-right-left transitions are quick. As the day progressed, I got more confident riding through the corkscrew but occasionally would miss the line and ride over the painted edge of the track.

The other part of the track that made me uncomfortable was the front straightaway. On this part of the track everybody is gunning it and most people reach triple-digit speeds. When bikes are traveling SO fast, just a mere few feet away from each other, it tends to get a little scary for me. So I would back off the throttle much earlier than the rest and let some of the bigger bikes pass me at the end of the straightaway. The first (double apex) turn “The Andretti Hairpin” at the end of the straightaway saw a lot of crashes. People would come in hot, down the slope of the straightaway, lean the bike over a bit too much, and low-side into the dirt. Overall I saw about 8 to 10 crashes over the course of the day.

As the day progressed my lap times became better and better. I was using an app on my iPhone for timing laps — called Harry’s lap timer. The fastest lap time that I recorded was 2:02 which was about as fast as I was willing to push it. I gave my iPhone for a few laps to Anil and he was consistently doing laps in the 1:50s. I think his fastest lap was about 1:51.

I did all of the afternoon sessions except the last one at the end of the day. I was getting tired and I didn’t want to make any mistakes and regret it. I loaded up the bike back onto the trailer satisfied with the experience of Laguna Seca and excited about the pictures that the photographer was taking.

Video from the first session, following the instructor:

The four of us lining up for a nice group shot: 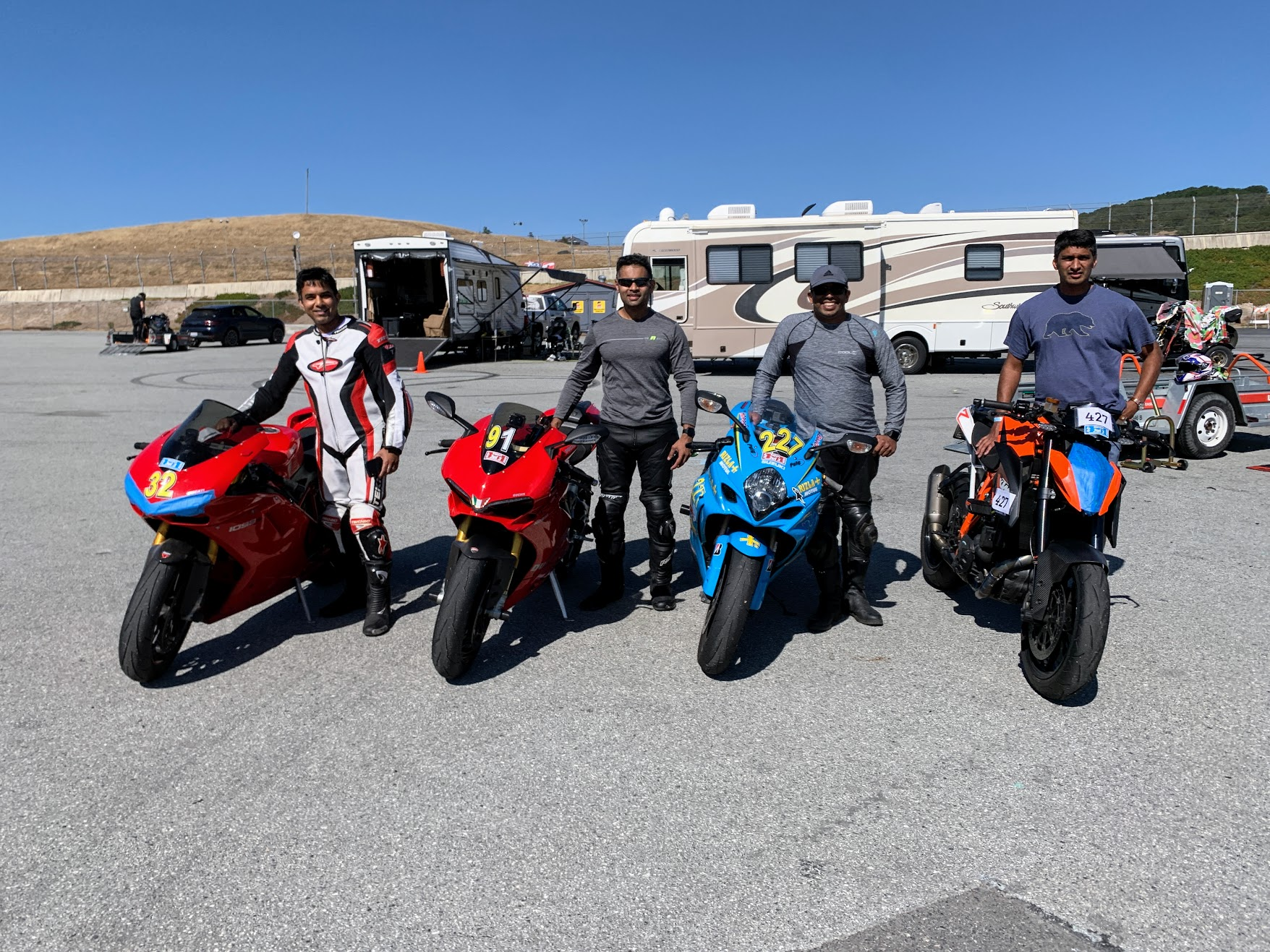 The KTM “mat” came in handy … blue carpet treatment for the SuperDuke: 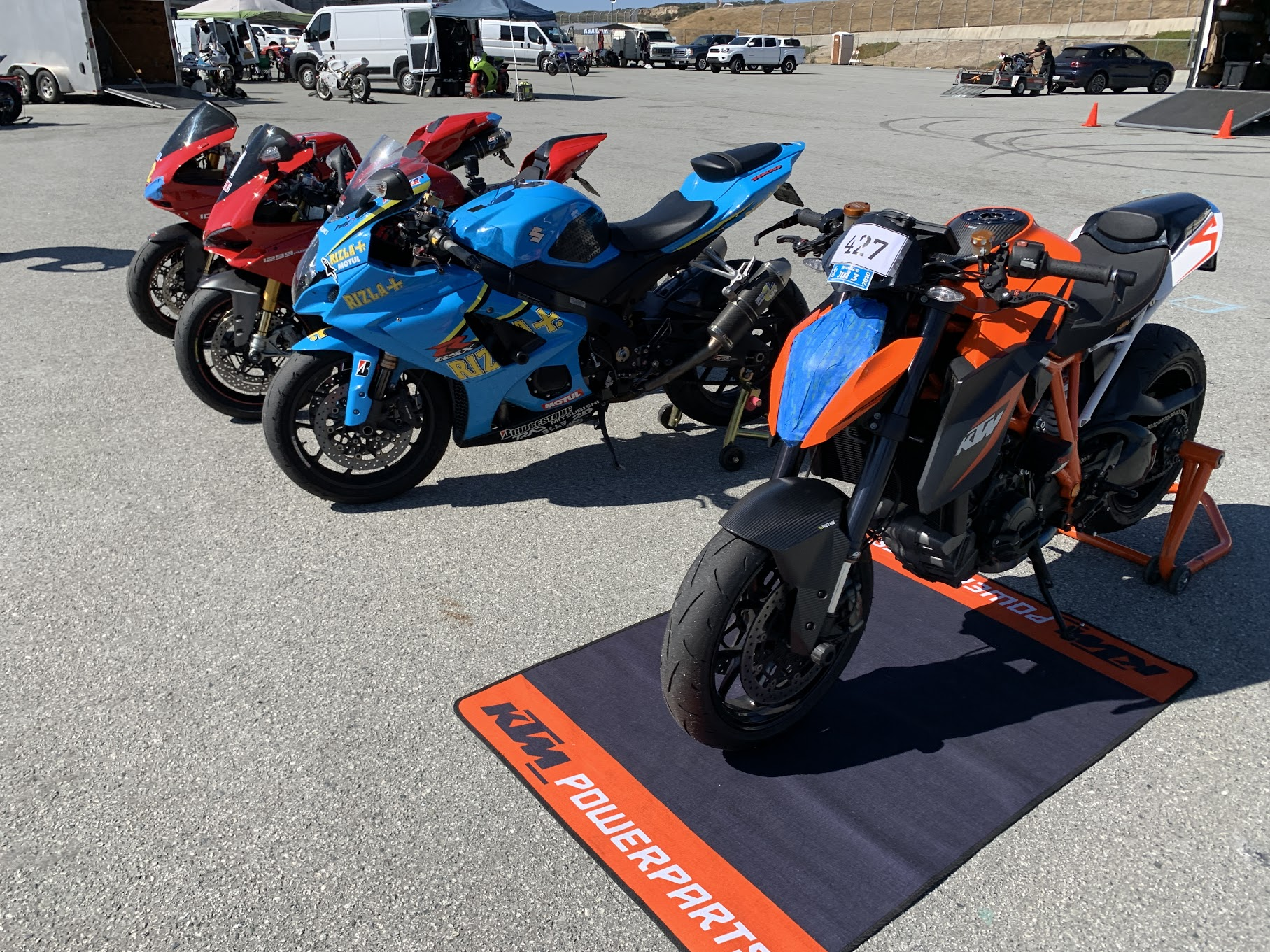 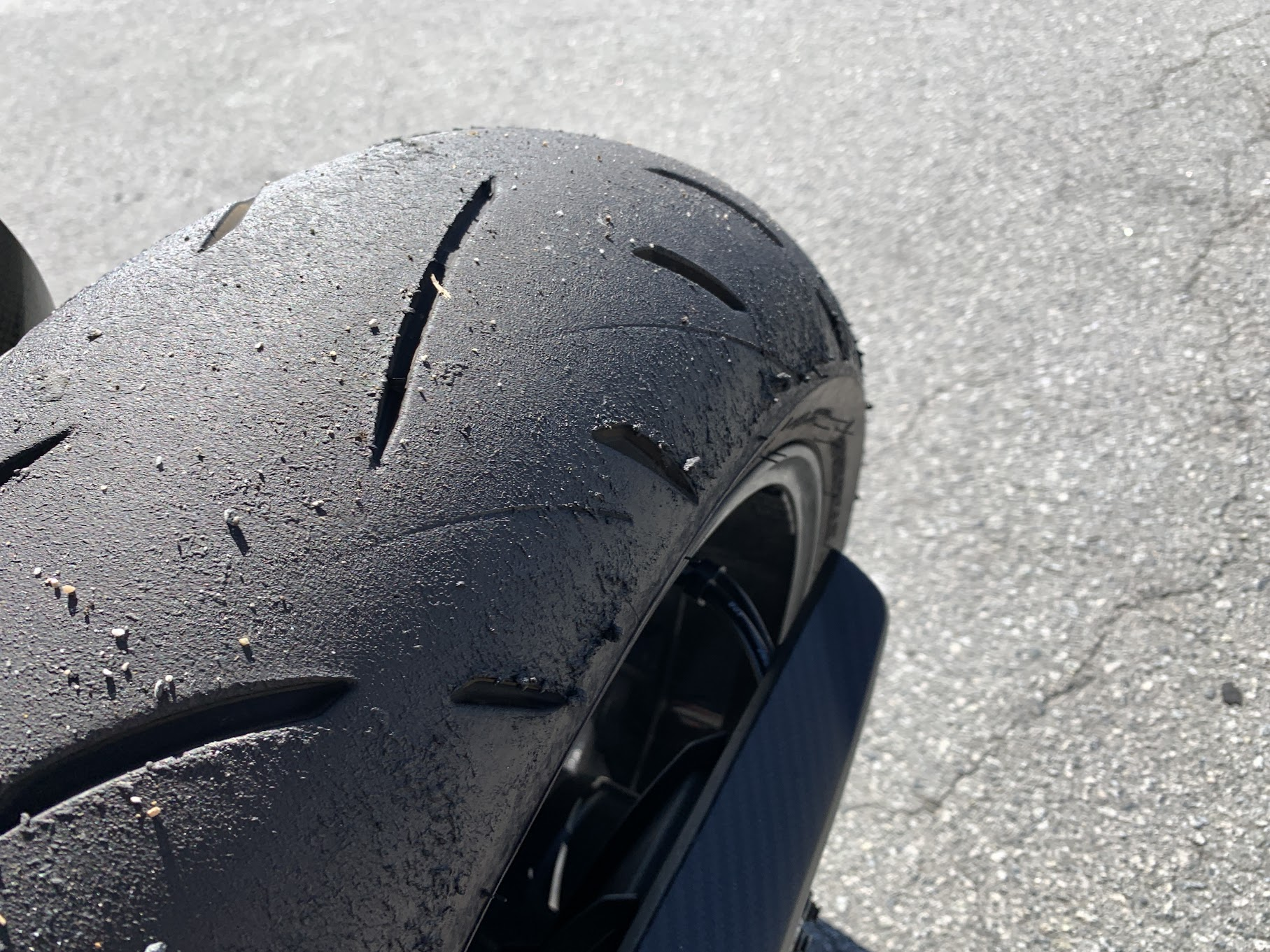 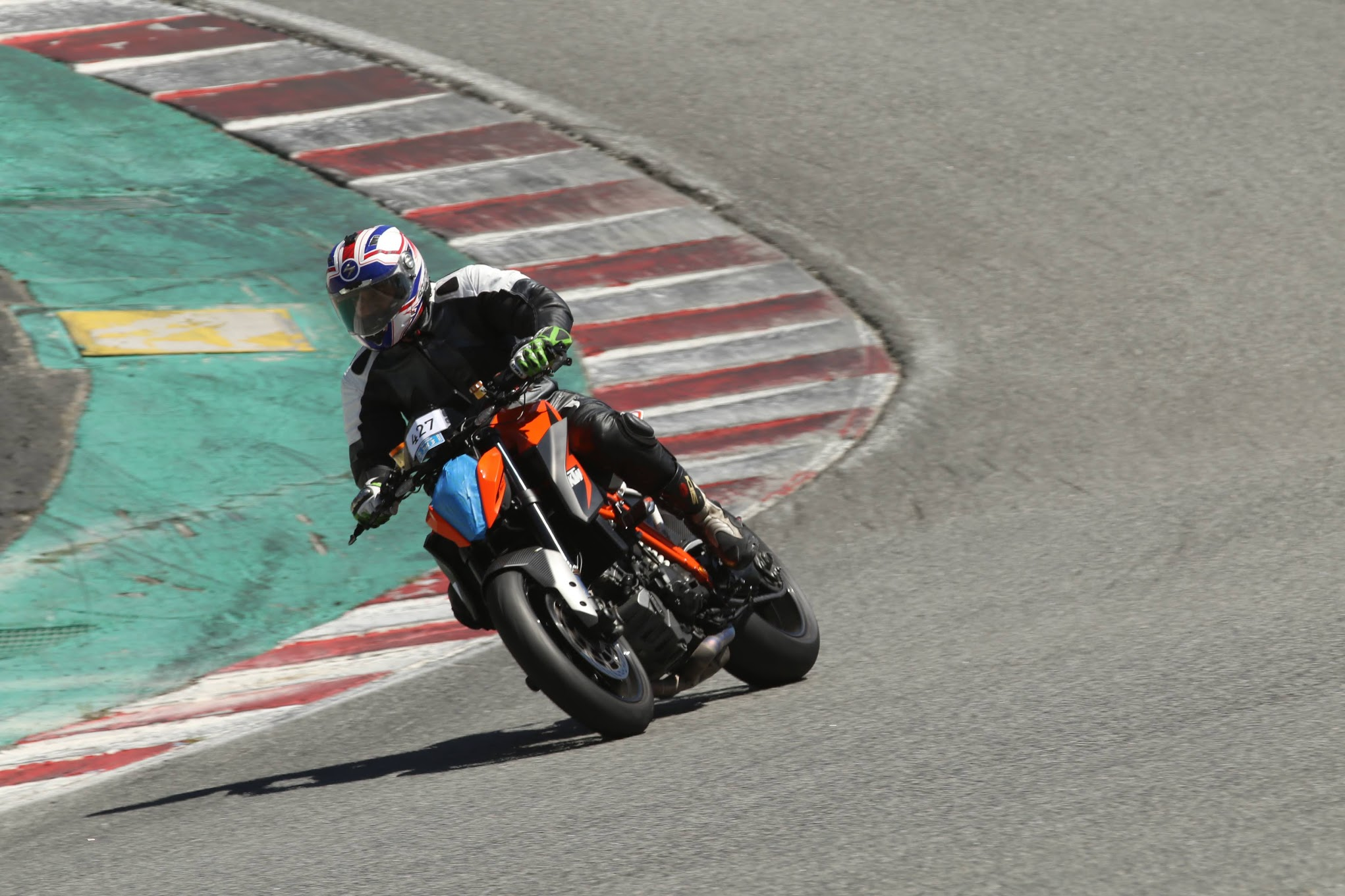 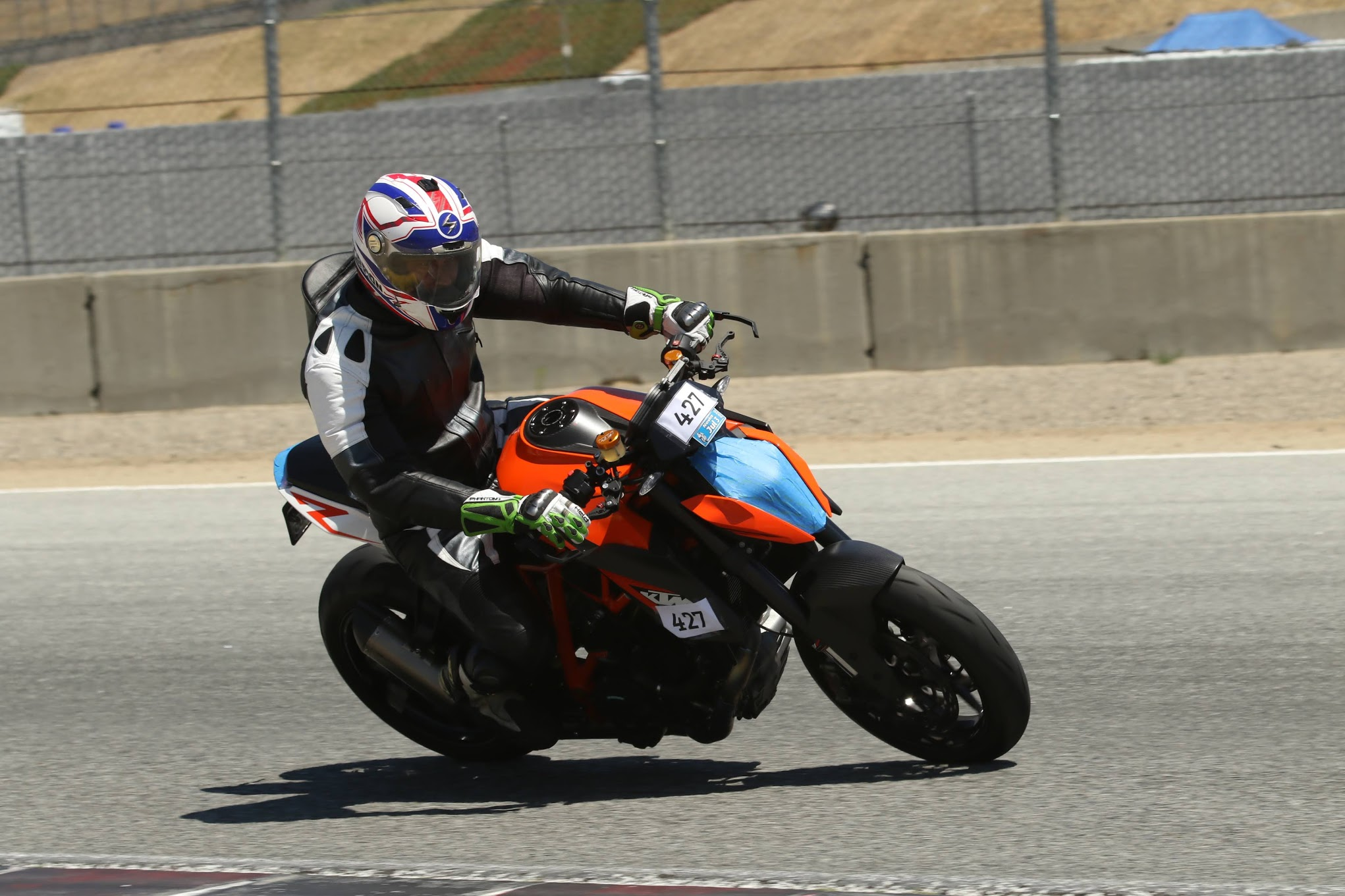 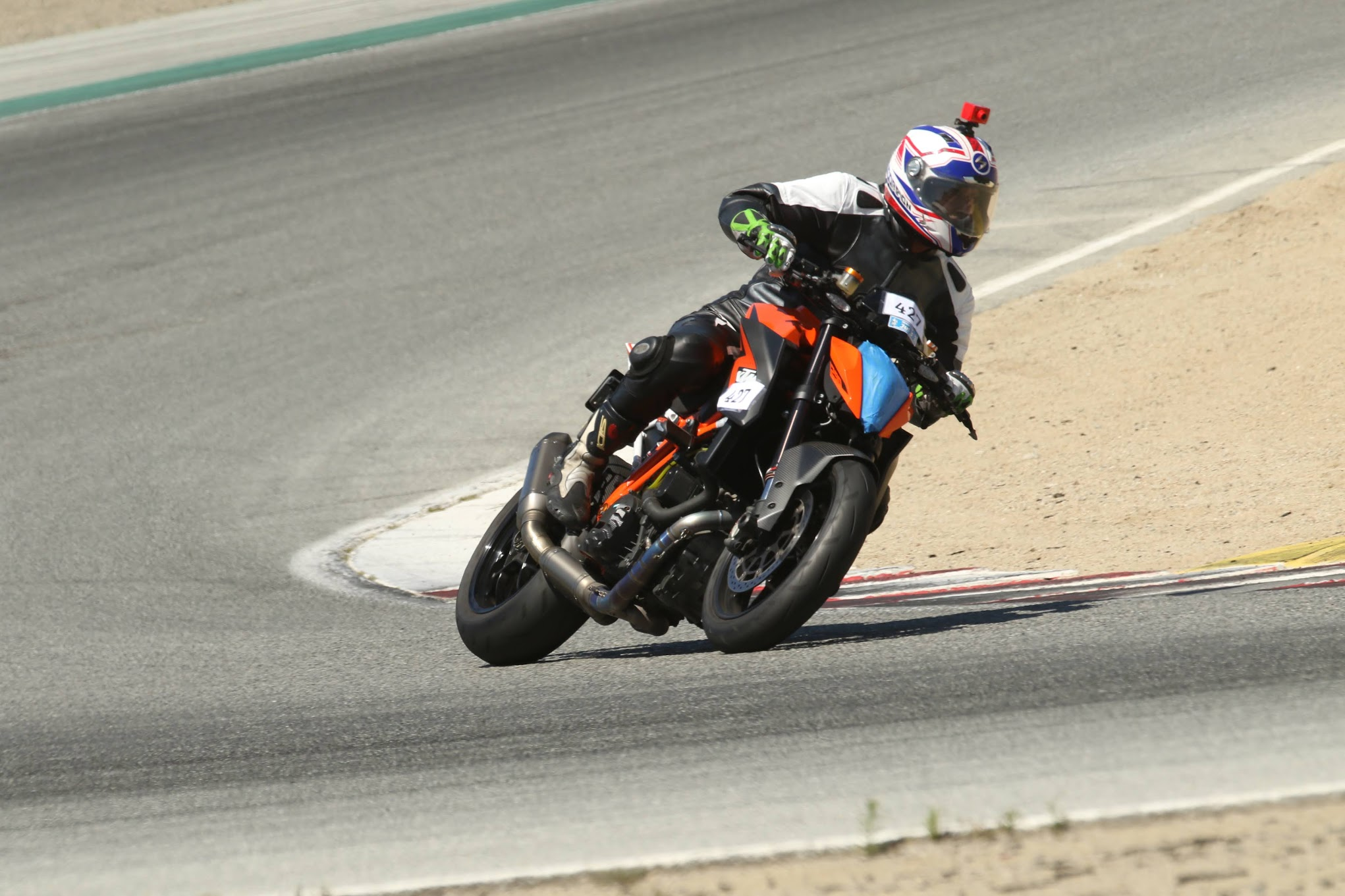 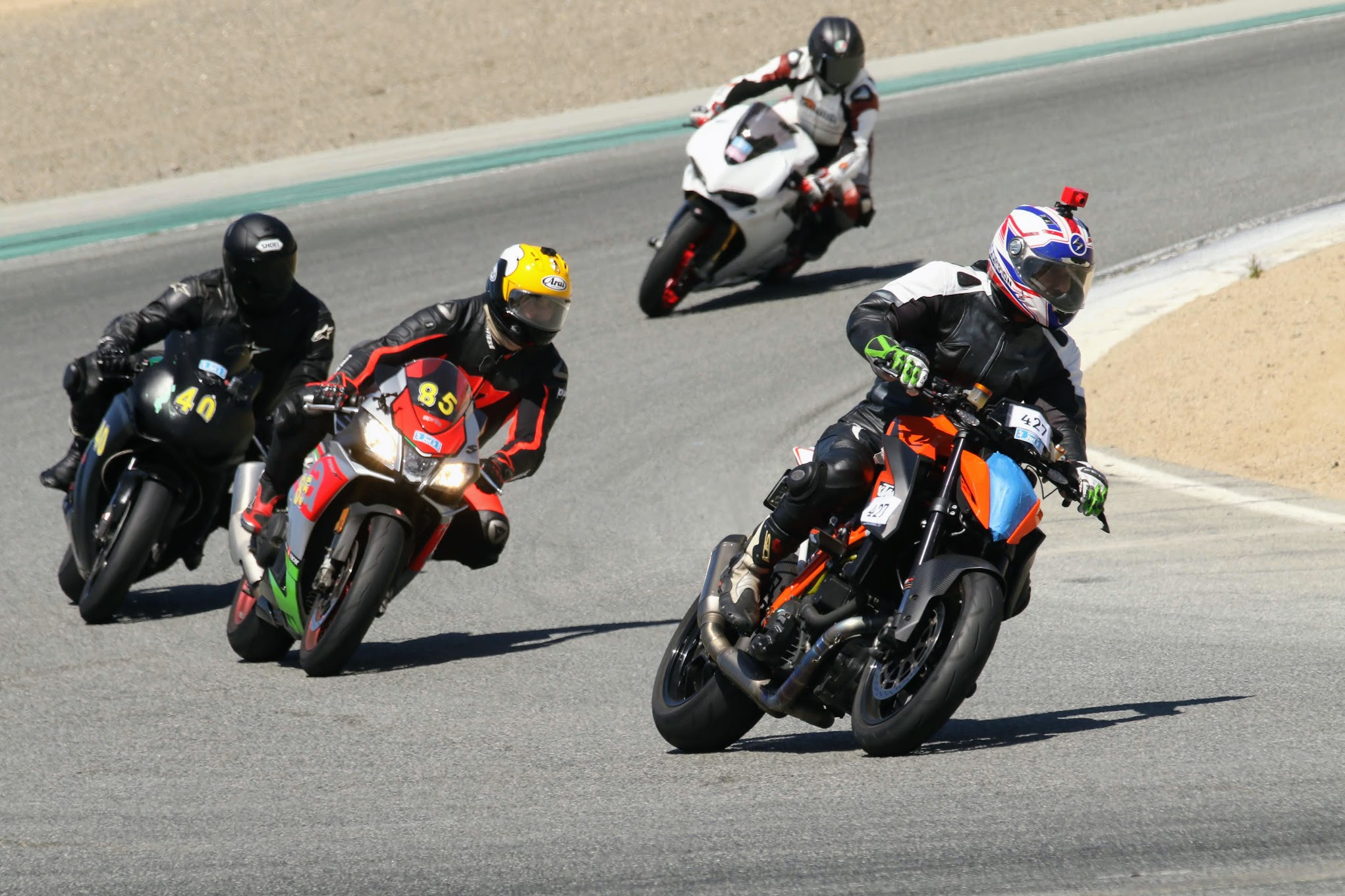 T5, my favorite pic of that turn: 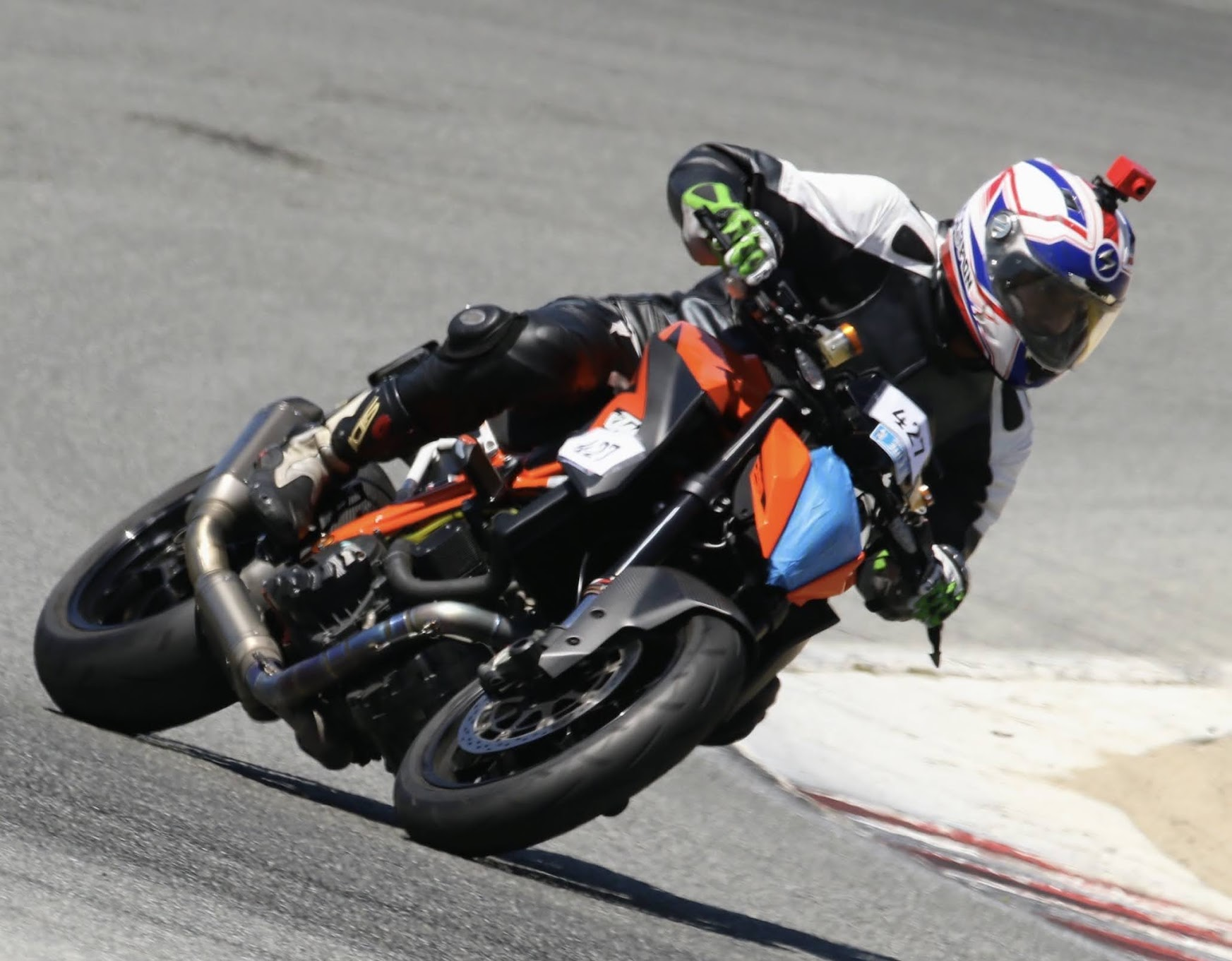 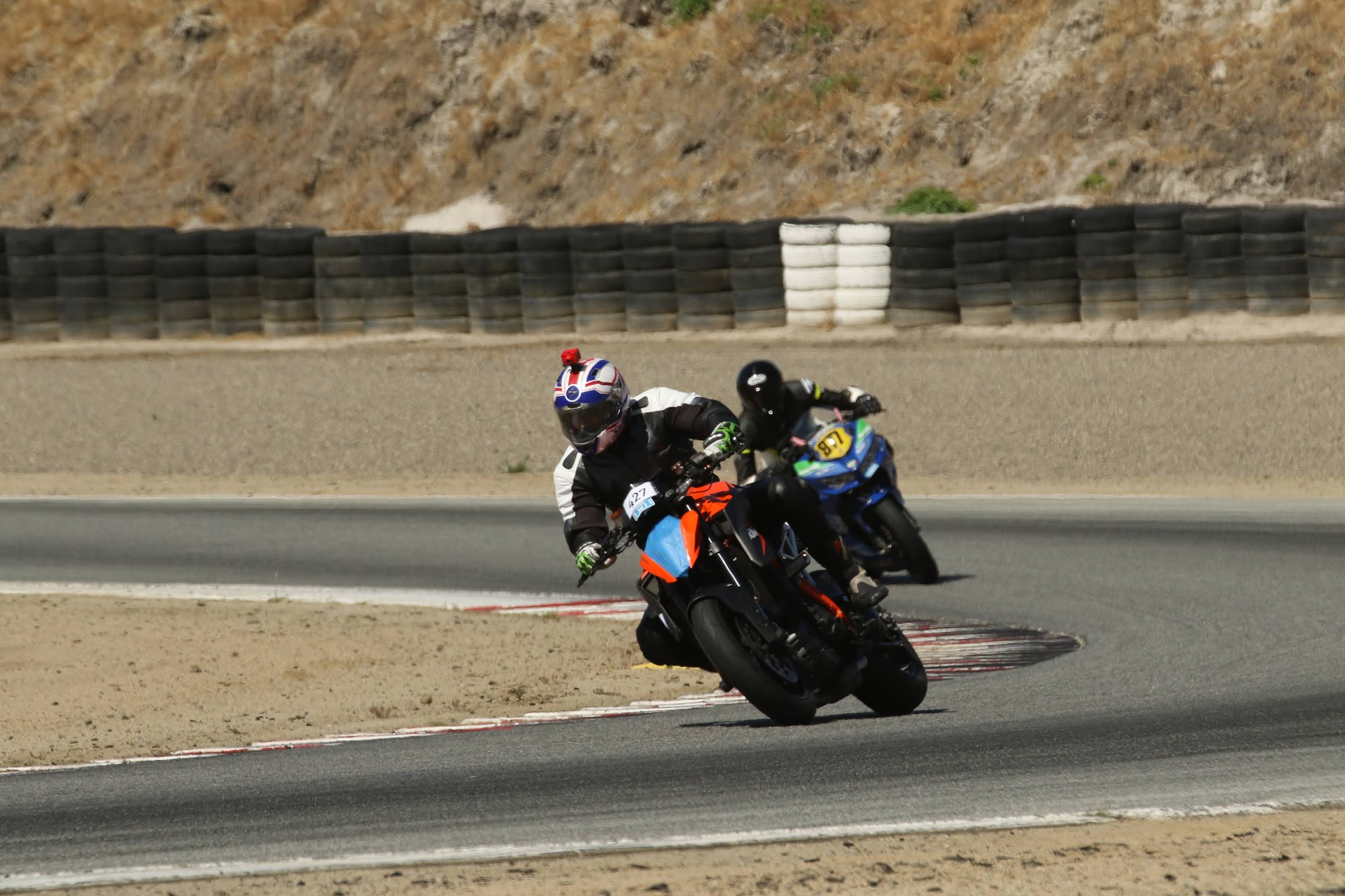 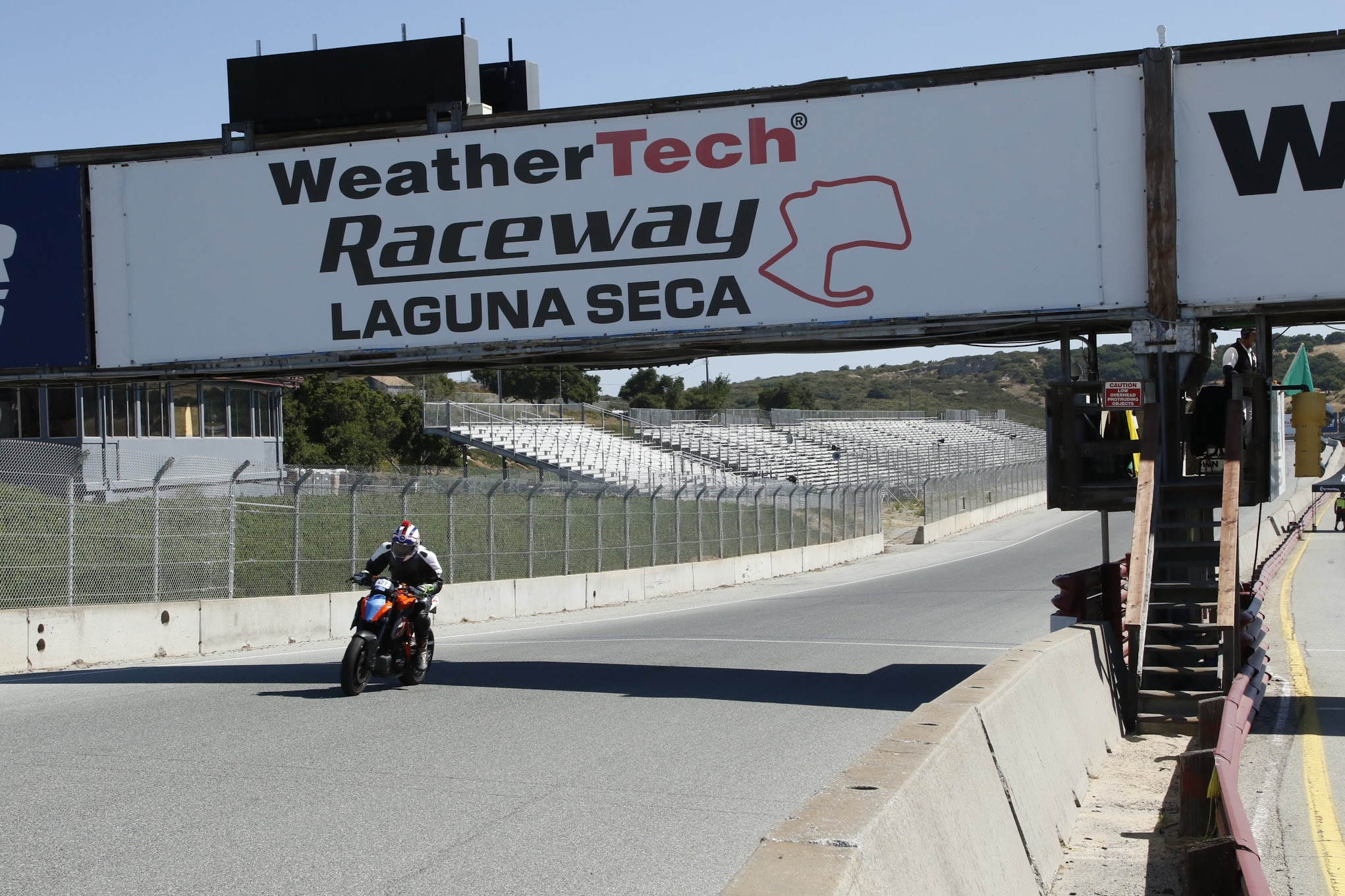 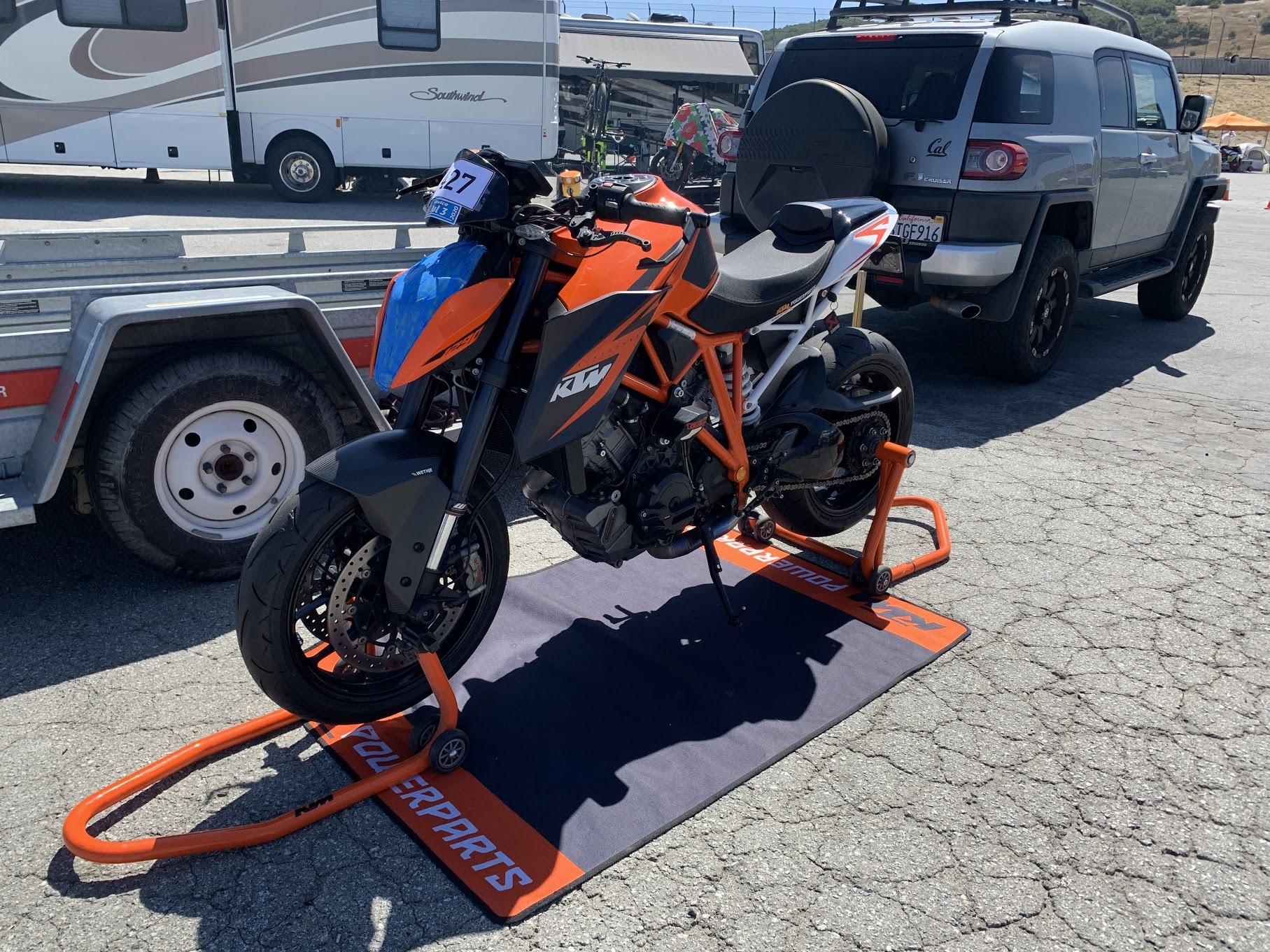 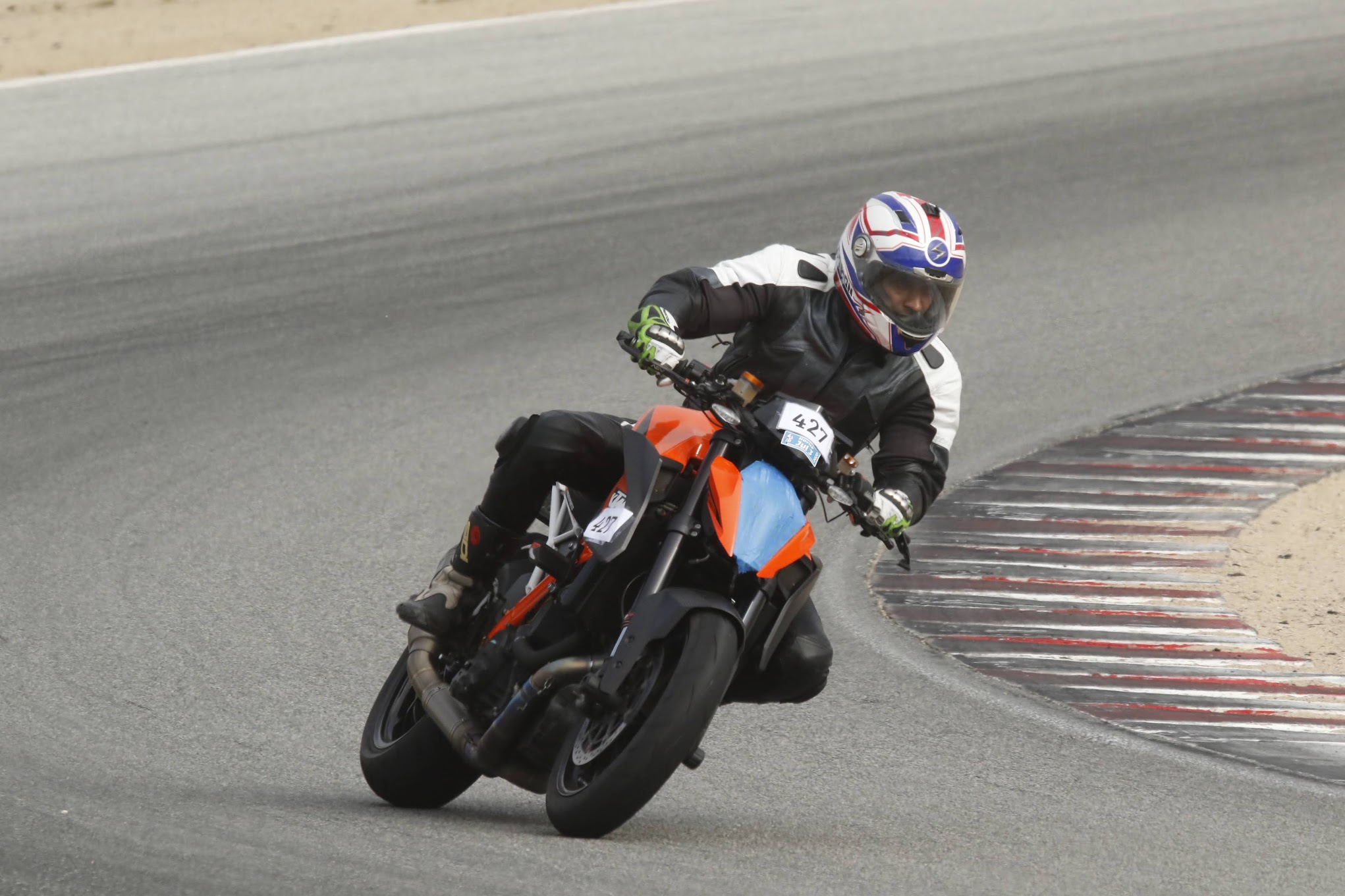